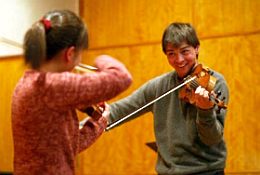 Just when music seasons have ended, and you'd think there is no "Music News" around, we ran into a mob scene of music in Santa Clara over the weekend. Some 1,000 members of the Music Teachers’ Association of California, and 2,800 of their 30,000 students, converged on the Marriott there for a five-day convention that's ending today.

That 2,800 figure for participating student performers came from the convention; our own research yielded a still mighty impressive 1,600 from the program listing, which begins (alphabetically) with Nadine Aderhold, playing the Bach Prelude in E Minor, BWV 941, and ends with Taylor Zier, in a performance of Carol Klose's Sonatina Bravo. Considering that teachers and students (and parents) have come from all over the state, the Marriott and other local hotels must have had brisk business for the weekend. With the Monday-Tuesday conclusion, some of those parents surely had to take extra vacation days from work — music education demands many sacrifices.

In Your Ear: the Headphone Racket

With all due respect to the Orchard, there is no need to parade iPods around in order to listen to music on the go. Although I am told frequently that it's "the best," it's also clear that we are talking $199 and up.

To make a clean breast of my proletarian standards, I am quite happy with my miniscule, $50 Sensa Clip, jammed to its 4GB limit with hundreds of MP3s 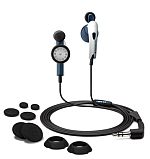 (including, so help me, the complete Wagner Ring).

In both cases, earphone buds are provided by Apple and SanDisk, respectively. In both cases, the earphones wear out much faster than the MP3 players; those darn wires have a tendency to fray and break. What will you do then, or, what if you want to upgrade from the provided earphone? Here's a short list of earphones I tried or was told about by friends:

The East Coast tour of the Palo Alto Chamber Orchestra and a student string ensemble, led by Benjamin Simon and featuring cellist and PACO alumnus Matt 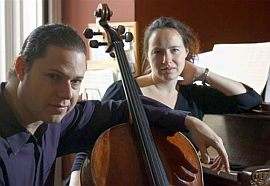 Haimovitz, was chronicled this weekend in The New York Times, including a review of Max's Moon by Luna Pearl Woolf, the cellist's wife:

Ms. Woolf’s piece was inspired by two children’s books, Maurice Sendak’s Where the Wild Things Are and Margaret Wise Brown’s Goodnight Moon, but it is more painterly than narrative. The first of its two movements, with its high-energy, sliding cello lines, evokes the mischievousness of Max, Mr. Sendak’s hero. And the Neo-Classical finale, etched in graceful, slow-motion chord progressions that underpin more introspective cello writing, hints at the bedtime ritual described in Goodnight Moon.

Mr. Haimovitz’s other contribution was a vital, rich-toned account of Schubert’s Arpeggione Sonata, in a string orchestra arrangement by Heinrich Klug. It takes a moment to get used to hearing the piece in this expanded form, but once you surrender to it, it has a certain charm. And the young musicians gave it a magnified but never overstated reading.

The PACO tour concludes on Friday at the Baltimore Museum of Art.

San Francisco Ballet dancers returned to company studios on July 6, to begin rehearsals for the next season. The company also marked the loss of S.F. 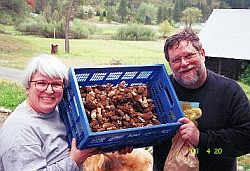 Ballet Orchestra bassoonist David Bartolotta, who died in a car accident last month while on a visit to North Carolina.

Bartolotta was a member of the Ballet Orchestra for over 30 years, and formerly served as the organization’s music librarian for more than a decade. Proud of being called "Chef David" by many, Bartolotta was passionate about cooking as well as music, specializing in mushrooms. He served as culinary chairman for the Mycological Society of San Francisco, and was active in the burgeoning Slow Food movement. A guest book of condolences is available online.

At the rehearsals, Isabelle Fokine, granddaughter of Michel Fokine, will work on the staging of her grandfather's Petrouchka, Christopher Wheeldon presents a world premiere, and John Neumeier stages his full-length ballet The Little Mermaid.

Is the Devil Coming to SFO?

It is, if William Friedkin's "people" are to be believed. A press release about the director says his future engagements include "a double bill of Suor Angelica and Il Tabarro in Los Angeles, Mefistofele — a coproduction of Teatro alla Scala, Milan and San Francisco Opera."

Considering that the entire Puccini Trittico was directed by Woody Allen in Los Angeles just last year, it makes you wonder. But as for San Francisco, our last Mefistofele was 15 years ago. (And Trittico is coming in September.)

Kennedy Center President Michael Kaiser has unveiled an "Arts in Crisis" initiative  aimed at stabilizing the thousands of theaters, opera companies, orchestras, and a myriad of other arts-related institutions struggling during the global economic crisis.

Kaiser has scheduled to meet with leaders of arts communities in all 50 states, plus the District of Columbia, over the next several months.

Though Kaiser has noted that it is too soon to tell whether stimulus funding devoted to the National Endowment for the Arts will do any good, he added that any money that they do receive will be funneled directly to promoters and theaters via grants.

Of the $787 billion economic stimulus package, $50 million has been earmarked for the National Endowment for the Arts for projects across the country. This followed removal of a Senate provision that barred states from using stimulus money on museums, theaters, and art centers.

Richard Fairman's review in The Financial Times has high praise for his Ives (From the Steeples and the Mountains and The Unanswered Question), but only at the expense of the rest of the program — "it says a lot about Ives’ genius for stepping outside his time that Prokofiev and Stravinsky [The Firebird] should sound so conventional afterwards."

The Prokofiev was the Third Piano Concerto, with Yuja Wang, "the latest star import from China’s massive factory for young pianists" [never mind that Wang has been playing in the West for a decade], with high praise and an unpalatable comparison with World's Best:

It felt as if lightning struck again here, as her fingers flashed across the keyboard with every note sparklingly in place. The music soared — no vulgarity, no banging, and it would have seemed the very model of a performance, if the memory of Martha Argerich in the same concerto only two months ago was not still so fresh. The myriad colours that Argerich gets flashing through the music take the audience on a wild ride as if they are tumbling around inside a giant kaleidoscope, whereas Yuja Wang’s highly skilled playing remains firmly in one dimension.

In The Guardian Wang also received a kind of grudging admiration ("dispatched the Prokofiev with huge technical assurance ... but the deeper personality of the concerto, if it has one, remained unrevealed"), and the two Ives pieces received top billing.

Speaking of Martha Argerich, as Yuja Wang audiences often do, she is at her usual summer chamber-music festival in Lugano, and the video taken there reveal wondrous performances.

Above all, do not miss the Janacek Sonata for Violin and Piano, with Dora Schwarzberg, and Shostakovich's Cello Sonata in D Minor, Op. 40, with Mischa Maisky. Actually, don't miss anything from Lugano.

DiDonato: 'The Show Must Go On' 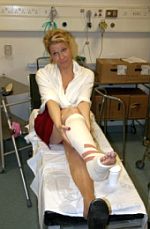 1997, it comes as no surprise that when she suffered a major leg injury last week on the Royal Opera House stage during The Barber of Seville, she finished the performance. Says one account:

Shortly after finishing "Una voce poco fa," alone on the bare stage, she walked to the corner and her leg just seemed to give way under her. There was nothing to trip over — perhaps she just slipped. She hauled herself up and carried on singing, but it was clear from her limp that all was not well, and her next appearance was with a walking stick, still limping.

A ROH spokesman announced before the second half that she'd sprained her ankle but was going to carry on despite the pain. And she did — with all her usual sparkle — wielding a flower-bedecked crutch as if it were just some fashion accessory. After all, that's what Rosina would do, isn't it?

She horsed around at the curtain call, waving the crutch in the air, but she didn't look her usual happy self.

Only in a postperformance medical examination was she diagnosed with a fractured fibula (calf bone, located on the lateral side of the tibia), and had a cast applied.

Opera San José is giving a free concert at 7 p.m., on July 11, during Santana Row’s Bastille Day Weekend Celebration. Naturally enough, selections are from French operas and operas set in France. In addition to seven singers from the resident company, OSJ alumni Sandra and Christopher Bengochea will be performing. The hour-long performance takes place on the stage fronting the Left Bank Brasserie restaurant.

Additional Opera San José events planned for the preseason: a public preview on July 18 at 2:30 p.m. at the Evergreen Library (free); concert at noon on July 26 at Cetrella restaurant in Half Moon Bay; a public preview on July 27 at 7 p.m. at Sunnyvale Library (free); South First Friday showcase at Caffe Trieste on August 7 at 8:30 p.m.; preview of Manon, Sept. 1 at 6:30 p.m., at the Fairmont ($25 with reception and lecture); and a First Nighter Dinner at the Silicon Valley Capital Club ($100 with dinner and solo artist performances).