When Dr. Larson told her that he would do special calculations to avoid her vocal cords when doing the Gamma Knife, and that he had to get the insurance company's approval to do so, she asked him, "You mean you think I can sing again? And go on with my career?"

She says now that that was the moment she realized that her doctor believed she would survive and go on with her life ... 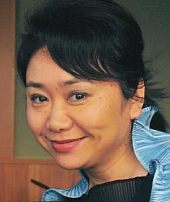 This thrilling news about The Bonesetter's Daughter mezzo Zheng Cao comes just two months after an online announcement that she had multiple Stage 4 cancers.

Public treatment of such illness and how she was "getting ready for the fight of her life" seems an invasion of privacy, but the information came from her closest friends (including, prominently, colleagues Frederica von Stade and Jake Heggie) and with her consent.

(A personal note here: many years ago, a close friend and journalist colleague at The Honolulu Star-Bulletin, Pierre Bowman, created a brave one-man campaign of information and education with a diary in the newspaper about his fight against cancer, literally up until his last days. This was at a time when whispers about the "C Word" only made the "unknown" more frightening, depriving people from knowledge that can support the patient's fight against illness and save lives.)

Last week's posting on the Web site for news about Zheng Cao says:

Zheng underwent gamma knife radiation four weeks ago. Yesterday, she had a follow-up MRI and her oncologist Dr. Larson discovered that a majority of the lesions were dramatically smaller, and the remaining teeny, tiny ones hadn't changed at all. And there were no new ones. She said that was the first time she left a doctor's appointment not depressed.

According to Dr. Larson, he usually doesn't see results this dramatic until three months after Gamma Knife treatment, so he's delighted with this outcome. Zheng is falling into a 1 percentile. She's also in a 1 percentile of people with her condition by walking around, feeling good, and generally not having any symptoms. 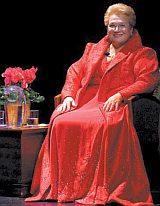 A remarkable group of young singers participated, including tenor Eleazar Rodriguez, baritone Eugene Brancoveanu, sopranos Heidi Melton and Heidi Moss, and mezzo Kindra Scharich. There should be a report in next week's column.

When she was declared cancer-free last year, she talked about her illness publicly "to help others facing the same illness," which had killed her friend and fellow opera star Luciano Pavarotti (and 30,000 Americans each year).

Beginning June 27, San Francisco's Walden School, its Teacher Training Institute, and Young Musicians Program once again offer their five-week International Summer Music Camp and Festival in Dublin. No, it's not the East Bay city, right next to Pleasanton, but the one 3,000 miles away, in New Hampshire.

In a virtual — and strictly coincidental — exchange for the New York-based Young Performers Program in San Francisco Peninsula locations, Walden's local faculty and students travel to Dublin School, which includes participants from all over the country. 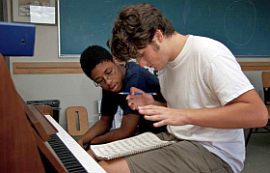 From Aspen to Chautauqua to Interlochen — on levels ranging from beginners to near-professionals, and notwithstanding financial challenges — such musical education-and-fun opportunities have assisted the emergence of generations of top artists.

The Walden executive director is a beneficiary himself of the summer-camp opportunity. Seth Brenzel, a member of the San Francisco Symphony Chorus, has been involved with Walden since he was a teen, attended the summer music camp on scholarship, then served as a board member, and now he is running the school and the summer project.

And then there are the concerts and the showcasing of new music. This year's Walden camp will have Joan Tower and Stephen Jaffe as composers in residence. Pulitzer Prize–winning Tower will work alongside young composers in Dublin, taking part in a free 16-concert series, featuring close to 100 premieres. "Though there are many music camps, there isn’t another like The Walden School," says Tower, "with its focus on nurturing musicianship through the act of composing and creating."

Jaffe has been a recipient of the Rome Prize, and his music has been performed by the San Francisco, National, and New Jersey Symphonies; he is currently professor of composition at Duke University.

In addition to San Francisco's many small choral groups, the "big ones" were going at full blast last week, with unprecedented excellence.

From the amazing, specially recruited, and temporarily constituted Porgy and Bess chorus on Tuesday, to the regular San Francisco Opera Chorus in Saturday's La traviata (both under the direction of Ian Robertson), and Ragnar Bohlin's San Francisco Symphony Chorus in a brilliant performance (on the night I attended, Friday) of Schubert's Mass No. 6 — this was a week to treasure.

'Our' Grimes Over There

If you're among those (rather, us) still upset about the cancellation of Peter Grimes at the San Francisco Opera — along with Grimes-fan S.F. Opera General Director David Gockley, who had to make the cut — it may further rankle to read about the English National Opera's current production of Britten's masterwork.

Why? In the title role, and called "magnificent" in the performance, is Merola Program's Stuart Skelton. Captain Balstrode is sung by Gerald (Doctor Atomic) Finley. If you want to hear "our" Grimes, you must do so in the London Coliseum.

Legions though my assistants may be, they all seem to be otherwise engaged, so I wonder if performance organizations and venue managers would assist in updating approximate cost figures published here four years ago. (This bears repeating: Rental figures are from 2005, and they may bear no 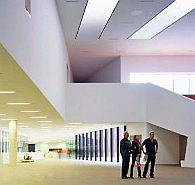 resemblance to what is true today.)

Here is the story and the information obviously in need of fresh input — to [email protected], please. Thanks in advance.

Expanding the story here, about the addition of new performance spaces with the completion of the new de Young Museum, the following is Classical Voice's guide to existing musical venues in the city.

Excluding the many church, temple, and school spaces, these venues are shown with their capacity and approximate rental fees for noncommercial organizations, where available. Rental costs are always complicated by specific arrangements for insurance, security, box office, and so on, so the figures here are obviously approximate.

Cabrillo Festival of Contemporary Music has won an ASCAP Adventurous Programming Award — for the 27th time. For the last 17 of those years, the festival has been led by Marin Alsop. 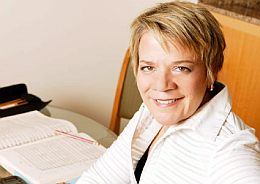 The American Society of Composers, Authors, and Publishers awards were given last weekend at the League of American Orchestras' 64th annual conference, in Chicago. "Adventurous programming" is defined as the featuring of music written within the last 25 years, which just happens to be Cabrillo's mission since its creation 47 years ago.

This year's honor is the John S. Edwards Award for Strongest Commitment to New American Music, the top award and Cabrillo's first. The Morton Gould Award for Innovative Programming went to the Los Angeles Philharmonic (where Esa-Pekka Salonen is yielding the baton to Gustavo Dudamel). Other awards were given to the Albany (NY) Symphony, and the Orange County (CA) High School of the Arts Symphony.

Maazel: Adams Is to Be 'Ever More Celebrated'

In an "exit interview" with departing New York Philharmonic Music Director Lorin Maazel, the conductor has this to say about John Adams, from whom he had commissioned the 9/11-commemorative On the Transmigration of Souls, which went on to earn three Grammys and a Pulitzer Prize:

My choosing John Adams was the result of a combination of events: September 11th itself, and the fact that I admired his music and thought he was the right standard-bearer to commemorate that tragic event. I guessed right. The piece is very touching, powerful, and in no way stretched out of shape. He treated the subject with extreme delicacy, which I find admirable.

Adams is one of our most significant and important American composers, one who I think will be ever more celebrated as time goes on.

Betty Connors, 92, who headed the Committee for Arts and Lectures (later, Cal Performances) at the UC Berkeley, for 35 years, died on Thursday. She served as director of the unit responsible for performing arts presentation on the campus from 1945 to 1979.

A native of the Midwest, Connors moved to Berkeley in 1940. While still a student, she played viola in the University Orchestra, directed by Albert Elkus, and organized concerts in local venues such as the YWCA and Le Bateau Ivre on Telegraph Avenue. After graduating from Cal’s Department of Music in 1945, she took over duties formerly administered by William Popper, a professor of Semitic Languages who served as chair of the committee on music and drama from 1924 to 1945.

The campus celebrated a major renovation of the Greek Theatre in 1957 with a production of Puccini’s Turandot by the San Francisco Opera. With the success of that event, Connors seized the opportunity to present the San Francisco Opera at the Greek Theatre annually for the next 12 years. With Hertz and Zellerbach halls at her disposal, she was able to expand performing arts presentation in general, bringing to the campus French mime Marcel Marceau, theater artists Jean-Louis Barrault and Madeleine Renaud, Jerzy Grotowski’s Polish Theatre Lab, and Peter Brook's The Ik. She pioneered the presentation of dance on campus with Maurice Béjart’s Ballet of the 20th century, the Joffrey Ballet, Dance Theatre of Harlem, Alvin Ailey American Dance Theater, and Merce Cunningham Dance Company, among many, many others.

From the 1950s until 1963, I worked with Betty on various committees including the Intercampus Arts Exchange that coordinated booking among the UC campuses and exchanged ideas. The "block booking" that operated through this exchange helped arrange favorable contracts, bargaining so that major concert managements could not lay premium fees on the programs in the various university campuses.

She wasn't "given free reign" nor even free rein, because the approval of the faculty committee (The Committee for Arts and Lectures, known by that term, not by the initials CAL) composed of at least two representatives from the music department and others from different departments, was crucial. In fact, the committee would, in many if not most cases, express a preference from the repertory lists submitted by the concert managements and influence, for the better, the programs of the visiting artists.

She was a very conscientious, dedicated administrator and built the sound base and history on which Cal Performances was built.

The East Bay commitment to modern dance was in large part due to Betty Connors' bringing the leading companies to Berkeley where they danced on the cramped stage of Wheeler Auditorium, a stiff stage that was not sprung, had no wings or provision for scenery, no curtains except for what could be rigged on the sides, not even a backstage.

A more dance-resistant venue could not have been designed, but the companies loved coming to UC Berkeley for the audiences and reception. Whether it was Martha Graham, Erick Hawkins, José Limon, or Doris Humphrey, Wheeler was always filled for the dance companies and a pattern was established, East Bay for modern dance, West Bay for ballet. That was changed once Zellerbach Hall was opened to become a favored venue for ballet companies. But the tradition and the fan base was by then set, significantly due to Betty Connors.