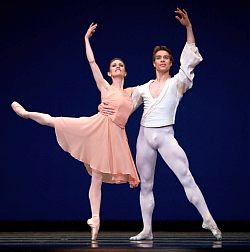 A "civilian" cannot even imagine the tenacity, physical strength, and unflagging focus required for San Francisco Ballet dancers at the very end of a greatly demanding season to perform Balanchine's full-length, supremely exacting Jewels at Saturday and Sunday matinees, and then to participate — brilliantly — in a Saturday evening Opera House gala for the retirement (could it be true?!) of Tina LeBlanc. Three "services" of about three hours each, all within 24 hours.

And yet, the admiring amateur himself showed some persistence of his own with an attendance record over the same weekend, adding to the SFB gala the Friday evening opening of Smuin Ballet's Spring Program at the Yerba Buena Gardens, and the Saturday matinee in Walnut Creek of Diablo Ballet's world premiere of A Little Prince (see next item).

Smaller, less expensive, and potentially more surprising, there comes a joint program of Ahdanco and Group A, May 15-17, at CounterPulse; Scott Wells & Dancers' What Men Want, May 22-31; the Joe Goode Performance Group presents the world premiere of Fall Within, a site-specific work at the Ann Hamilton Tower sculpture in Geyserville, May 16-17. 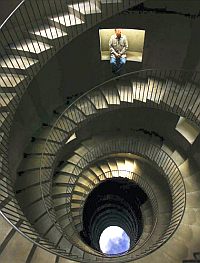 How about seeing the Ramayana being danced? Yes, you can! More than 300 Chhandam School of Kathak Dance students will perform India's great epic, under the direction of founder-director Chitresh Das, on May 16-17 in San José's Mexican Heritage Plaza Theater.

This surfeit of dance around here is extraordinary, even when regarded against the genre's traditional hyperactivity in the Bay Area, but small wonder: When you have music, dance, and high production values — mostly at affordable prices — what is there not to like?

You don't need to be a balletomane to get a tremendous amount of enjoyment from music in three dimensions. Case in point: the second movement of Shostakovich's Piano Concerto No. 1 in the second half of Michael Smuin's Bouquet, a glorious love duet. As danced with utter grace and believable chemistry by Brooke Reynolds and Aaron Thayer Friday night, the music appears in a whole new light, outdoing Tchaikovsky in passion, but without the excess.

And yet, the orgiastic celebration in Tchaikovsky's Suite No. 3, Opus 55, was exactly right as Balanchine's Theme and Variations closed the LeBlanc gala, Martin West conducting the Ballet Orchestra in one of the season's most unfettered performances.

Another Tchaikovsky pas de deux (its music intended for Swan Lake, although it disappeared for decades), which gave the program-opening work Saturday its name, gave wings to LeBlanc and former SFB principal Gonzalo Garcia, now with the New York City Ballet, and returning to the city just for this special occasion. A star even during his late teens here, Garcia has grown into a phenomenal dancer of grace, athleticism, and astonishing, effortless precision. 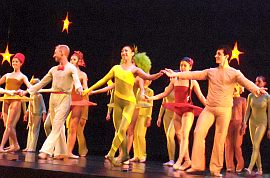 The composer Matthew Pierce on violin (accompanied by Marc Shapiro) performed his own music at the Saturday world premiere of the Diablo Ballet's production of Julia Adam's The Little Prince, in Walnut Creek's Lesher Center for the Arts.

This choreographic-musical partnership was previously in evidence at the San Francisco Ballet's much-praised Night, and Innocence and Experience at BalletMet, and in other Adam-Pierce works.

Somewhat minimalist (light on ostinato), jagged, and powerful, Pierce's music provided just the right underpinning to Adam's choreography for the intergalactic travels of the Little Prince (Edward Stegge), complete with the Pilot (Jekyns Pelaez), Elephant/Snake (Mayo Sugano), the Lamplighter (Mariko Takahashi), and the multitalented Erika Johnson — in three roles as the Sheep, Rose, and Fox, of this affecting tale in which "what is essential is invisible to the eye." (A tough chore for a ballet company.)

Given Diablo Ballet's limited resources, creators of the new ballet and the company kept ambitions in check, and provided a fine, entertaining hour, even silencing the audience of an estimated median age of 10. An expanded and more mature setting for the work promises a delight.

Sills Award to RelyeaJohn Relyea, 37, has won the Metropolitan Opera's $50,000 Beverly Sills Award. Relyea, who made his Met debut in 2000 as Alidoro in Rossini's La Cenerentola, is the fourth recipient of the award, which was first given to baritone Nathan Gunn in 2006, and subsequently awarded to mezzo Joyce DiDonato in 2007 and tenor Matthew Polenzani in 2008. Relyea and DiDonato were both Merola Program participants, in 1995 and 1997, respectively.

One Musician's Economic DownturnAll we know is what we read in e-mail. The one over the weekend from Silicon Valley Symphony Music Director Michael Gibson contained this information (in addition to a glowing plug for his orchestra): My position as director of music ministry at the Presbyterian Church of Los Gatos (for the past five years) has been eliminated. I will be out of a job at the end of June. One other full-time position was also eliminated, both due to financial concern. At this point the orchestra plans to continue rehearsals and performances at the church, hoping that Rev. Mark Burnham's support will carry the day.

It is our hope that you continue to attend concerts at the church next season. Also, if you are looking for a church home, services are Sunday morning at 10 a.m. If anyone needs a music director and conductor, please contact me at [email protected]. I am also hoping to find ways of turning the SVS into my new job. Please let me know if you have ideas, or can help in some way.

The Silicon Valley Symphony is improving with every concert. I hope to expand our concert venues next season and bring back the Bay Area Little Symphony, a professional orchestra that does in-school educational concerts for school children in our area.

Gibson's next Silicon Valley Symphony concert is on May 16 at the Los Gatos Presbyterian Church. (Symphony Silicon Valley, another organization — successor to the late San José Symphony — is performing Haydn's Lord Nelson Mass at the California Theatre, June 6-7.) 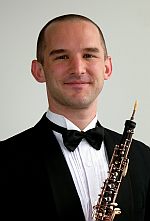 Ben Opie, a graduate student at the San Francisco Conservatory of Music, has won the position of principal oboist with the Adelaide Symphony Orchestra. Opie, a student of James Moore, will receive his master of music degree this month, then return to his native Australia in mid-June to begin his new career.

In Adelaide, Opie will perform under the baton of Music Director Arvo Volmer. Soloists during Opie's first season include violinist Pinchas Zuckerman, singer Katie Noonan, trumpeter Vince Jones, and pianist Marc-André Hamelin, among others. Founded as a radio ensemble in 1936, the ensemble now performs more than 40 concerts annually in five series.

Opie received his bachelor of music degree in Canberra, Australia, then studied in Germany for two years. In 2006, he was invited to play at the Rheinsberg Summer Opera Festival as principal oboist with the RIAS youth orchestra.

In 2005-2006 he was principal oboe in the International Music Festival in Bahrain. During his San Francisco years, he promoted both contemporary and Baroque music.

A Classical Voice review hailed his versatility on the oboe, "conjuring an astonishing range of sounds from his instrument." He has also played principal oboe and English horn with The Magik*Magik Orchestra.

Music of the MayaRanferí Aguilar and his Los Hacedores de Lluvia (The Rain Makers) present a musical fusion that combines the sounds of Mayan culture with melodies created for traditional wind and percussion instruments.

Assisting Conductor Becomes an Assistant ......but does associating make one an Associate?

Puzzled by what appeared to be an unlikely cluster of positions for Donato Cabrera in the San Francisco Symphony announcement that he will head the SFS Youth Orchestra, I looked into the statement that "Mr. Cabrera is currently an assistant conductor for the Metropolitan Opera, Lyric Opera of Chicago, Los Angeles Philharmonic, and San Francisco Ballet"; his own Web site added: "From 2005 to 2008, Mr. Cabrera was the associate conductor for the San Francisco Opera."

He is actually not on the roster of any of those organizations, although Cabrera has helped preparing productions here and there, was engaged to conduct four times at S.F. Opera, and took over a Symphony concert last month after two previously engaged conductors canceled. (I was impressed with his conducting L'elisir d'amore at the Berkeley Opera.)

Apparently, the discrepancy comes from not distinguishing between function (assisting) and title (assistant). Cabrera responded to an inquiry by saying "... while none of these are permanent appointments, they are all relationships that I intend to nurture and develop into more substantial engagements in the future."

In an e-mail to Classical Voice, he further elaborated on these "entitlements":

In all honesty, I get confused about all of these titles, too. For instance, at the Met, I was hired as the assistant and cover conductor for Dr. Atomic. I conducted about half of the staging rehearsals and would've gone on for Alan Gilbert in case of an emergency. However, in the program, ALL of the pianists are also listed as assistant conductors, which makes it look like there are about 75 conductors that work there.

At the Lyric Opera of Chicago, I think I was only listed in the program under "musical preparation" although my responsibilities were slightly more involved then at the Met (I conducted the Banda). At San Francisco Ballet, it's as if I was never there at all.

My contracts for all of these institutions list me as Assistant and Cover Conductor (with capitals) but I can see how this could be misleading in a bio. Let me see if I can rework it somehow.