The American Bach Soloists, a charter member of the Bay Area’s thriving early music community, turns 20 this season. Through the years its core membership has been remarkably stable, so you understand why Artistic Director Jeffrey Thomas refers to it as a kind of extended family.It's also an unusual chamber ensemble in that many of its greatest successes have come in performing larger works, such as J.S. Bach’s Mass in B Minor, which they have just finished presenting in a run of sold-out concerts (see Janos Gereben's review); the "St. Matthew" Passion, available in an acclaimed recent recording; and Beethoven’s Ninth Symphony, the subject of a 1994 performance, recently released on CD. You would not have guessed at those coming splendors, had you been at the group’s inaugural concerts. As Thomas recalls ABS’ founding: A number of us were doing a performance — I think it was the Mass in B Minor — somewhere in the South Bay. And in those days you’d wind up in Kalamazoo, Michigan, or someplace in Florida, and it was the same people getting hired, hopping around the country doing early music. So we were just thinking, “Wouldn’t it be nice if we could get together on our own?" People were lamenting the fact that they had to travel out of the country — isn’t that crazy? Why would you lament having to travel out of the country? And so that’s how it started. In the beginning, of course, it was without a conductor. In the first couple of years, we performed mainly cantatas. [But] it was only a few years later that we performed the Mass in B Minor, and it was clear that you can’t do things like that without a conductor.Of course, founding a group and finding success are two different things. In the beginning, you may feel as if you’re on a secret mission that you’d like other people to discover. Thomas agreed with that characterization: That’s how it felt. We began wanting to perform primarily [Bach’s] cantatas, because we knew that they’re fantastic music — frankly, every one of them [is] — and they were performed much too rarely back then. So it was a matter of finding [an appropriate performance style] for the music. There was a lot of discovery going on back then about [the cantatas].Broad Artistic VisionFor Thomas, that need to find a way to express Bach’s urgent musical rhetoric, to render it meaningful for a modern audience, continues to drive an artistic vision that includes a strong educational component, which has become integral to ABS performances. In every cantata performance, for example, the audience is invited to learn the chorale melody that always ends the piece. Thomas says, It’s a great challenge for any of us, in the last couple of centuries, to really comprehend the power of Bach’s rhetoric. There are all of those arias in which ... a chorale melody comes in, and in Bach’s day this basically illiterate audience would recognize the tune, and they knew what it meant. And that’s kind of lost on us — we don’t know 300 chorale tunes. 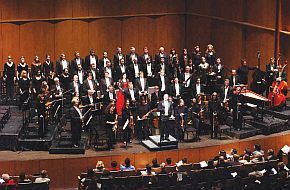 The American Bach Soloists in performance

Part of the success of American Bach Soloists in cantata performance comes from superior musicianship. But it also is a function of Thomas’ willingness to engage the meaning of the religious text while conveying Bach’s startling text-setting by taking interpretive chances. Thomas remarks, I guess that comes from the days when I was singing. It was something I always looked for — “Why did the composer choose these notes at this spot?” I was always asking myself those questions — “Why is this text repeated?” ... And then I think it’s familiarity with Bach’s music, and eventually things jump right off the page. You see the symbolism, the patterns, and the way that he combines words with the impressions that musical gestures make. It might make some of us uncomfortable that he wrote music that is so pictorial. It seems so crafty. But it was his responsibility as a person who was supposed to [aid] understanding [during the Lutheran religious service], and that’s why he was able to write so pictorially, unselfconsciously. And a work such as the "St. Matthew" Passion was meant to move people to the depths of their being. ... You can’t treat it like just any story.Expanding the Circle

One fascinating aspect of the early music repertory is that there is always “new,” unknown, or lesser known music to perform. But Jeffrey Thomas, though he clearly has wider interests in the German Baroque, is wary of introducing unknown repertory without proper preparation. “We have to program in such a way that will interest a wider circle of people. That’s really our job, more than anything: to try to broaden the circle.” He’s clearly not interested in solely the early-music-specialist audience. Instead, in a trend that may increase in the future, ABS has featured more chamber performances, with Thomas sometimes leading from the harpsichord, and also has presented recitals featuring particular members of the group. It has moved into late 18th- and early 19th-century music.

Last year, the choral ensemble gave a program of works that went through to contemporary times. In another sign of how the arts can reach wider audiences, listeners can now download all of American Bach Soloists' recorded music from Magnatune or direct from the American Bach Soloists' Web site. “We just have to get smart and realize, ‘That’s the way it is,” says Thomas. “Music is now free for the rest of time, because of the media. It extends your reach. It’s obvious that it’s the right thing to do.” I asked Thomas for tips for surviving today’s rocky financial waters, based on 20 years of helping to run an organization. He mentions, of course, ABS’ dedicated board of directors. Yet in the end, for this organization, it comes down to everybody, the musicians especially, simply willing the ensemble to survive, and then doing what has to be done to ensure that it does. And we’re back to the family metaphor. As long as that remains, we can assume the journey will continue.