Opera throughout its first three centuries has depended on private underwriting, aristocratic and otherwise. Where before has the composer himself been the patron? And why not?
Plump Jack, San Francisco composer and philanthropist Gordon Getty's favorite obsession, has gone far as a piece since its 1984 San Francisco Symphony premiere. While writing other pieces, Getty has worked and reworked it continuously. Lines have been simplified, music adjusted and replaced, orchestration revised, and other trims made, similar to the "editing " musicals and even some operas regularly undergo.

So it was that an essentially new opera, born, cultivated, and fledged in San Francisco, took off on a great journey last week — and probably a unique operatic adventure. Getty's Plump Jack, with a crack cast, put in first in Albuquerque, where the New Mexico Symphony, a solid orchestra, took it under its wing, playing most of Act II in concert May 11 and 12. Next stop, Mazatlán, Mexico, for the entire opera in concert at the jewel-box 19th-century Angela Peralta Theater last Friday, the cast joining up with a new yet surprisingly sharp symphony orchestra and opera chorus from Culiacán (the capital of Sinaloa province). Who knew?

It went over very well with the audience of largely local residents who had streamed in from a lively, colorful old-town plaza, filling the theater, anticipation high. Supratitles in Spanish conveyed the sense of the strictly Shakespeare text (mostly from Henry IV), and the eight visiting American singers brought the intricate play alive. This is a veritable pageant with vivid characterizations and a complex score, a tough order to bring off in concert, minus the 16th-century costumery, Shakespeare-styled scenery, and broad stage caperings — the rowdy roistering of the outrageous Sir John Falstaff, Pistol, Bardolph, Nell Quickly, and company. Yet, with the high-powered baritone Steven Condy as Falstaff front and center, setting the broad vocal and gestural scale of the performance, and with conductor Gordon Campbell's orchestra keeping Getty's high-contrast sonic "staging" on track, the piece worked.

Condy produced a torrent of energy, a whole glossary of Falstaffian gestures and mercurial changes in expression and voice. From sly, undertone asides to climactic rousing high Gs, his baritone was potent and pervasive. He was Falstaff — Getty's Plump Jack.

The pageant opera courses through 12 scenes, two or three of them a little slow. Getty sets up the glorious excesses and consequences of Falstaff's riotous behavior and Prince Hal's involvement with that gang. Hal then repents and promises his aged and declining father, Henry IV, to reform. The fine tenor Robert Breault captured the opera's first telling moment, singing Hal's "I promise thee" and ending on a pianissimo high G. That is exactly paralleled or echoed when Hal later promises himself to banish Falstaff.

Playing the role of his father in comic play in the Boar's Head Inn, Hal had denounced the fat knight in every cutting way. Falstaff responded with his great scena, an aria that drives to its climax with the words "banish Plump Jack and banish all the world!" the last on a triumphing high G. Then in response but just to himself, Hal sings, "I do ... I will." The second words are on that self-same soft high G of his earlier promise. Following that, the first act concludes with Nell Quickly's declaration of love, touching the feelings as Zheng Cao sang it. Falstaff departs for Gloucestershire, ducking out of fighting in Henry IV's war against the rebels.

The opera's high point occurs after Falstaff has rushed to Westminster on the news of Henry IV's death, expecting to be embraced and elevated by the newly crowned Henry V. He is instead rejected and banished. The suspense at that moment is great, helped by the chorus' singing and shouting as a crowd and the orchestra's strong brass gestures. Breault made Hal's rejection of Falstaff devastating, his tenor lancing in clarion tones, his lines alternately pianissimo and raging forte. Condy dropped limp onto his chair in Plump Jack's sudden deflation, the single defeat of an indomitably pretentious life. It was a stirring moment, underscored with plangent music in the strings. The scene ends with the chorus chanting the "Agnus Dei ... Dona Nobis Pacem" that concluded the Mass of coronation. 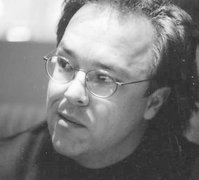 Another strong juxtaposition followed, Pistol's announcement of Henry V's impending invasion of France and Henry V giving the rallying call to arms, cutting to the scene of Falstaff's cronies, grieving over the knight's impending death. "The king hath killed his heart," they sing. Then Zheng Cao was most moving with Quickly's poignant aria about his death. Without pause, we hear the English soldiers marching off to go to France, the "Agincourt Song" sung, a fleeting impression of bagpipes in the orchestra. The chorus bids them "Adieu ... Away, away" and sings a touching, soft, drawn-out "Farewell" to the troops, and implicitly to Falstaff, as well. The close is affecting.

Getty's musical idiom is tonal, but not 19th century by a long shot, no more than that of others who write operas in the tonal idiom today: André Previn, Jake Heggie, Dominick Argento, and so on. The keys shift colorfully, the harmony stays on course, and the orchestration, vastly improved with Getty's reworkings over more than 20 years, is effective. Much of the musical continuity (and dramatic commentary) is in the orchestra as it supports the sung dramatic narrative. That in itself is too angular, disjunct, and often propulsive to be called simply "recitative." There is generous and catchy melody in the orchestra, thematic elements that are expressive and recalled in association with dramatic ideas or moods, some that really stick. The overture introducing most of these is nicely done, but it's too long at 10 minutes.

The challenge for orchestra and singers alike is the rhythm, the score's constant change of tempo, the mercurial dialogue. Between the speech pattern of the Shakepeare text and the dramatic punctuation of that speech by the instruments, the music is exceptionally tricky. With all that in consideration, the clean performance that this large Mexican-American ensemble pulled off was impressive. Gordon Campbell, who has been drawing considerable talent from afar into this 62-piece orchestra, kept a firm rein on the ensemble and continuity. His orchestra musicians, of many nationalities, performed well. So did Sergio Martinez Chávez's 3-year-old opera chorus of 32 good singers. All Mexicans, they remained on top of the English text, much of it in fast dramatic responses.

A larger issue is the structural one. The opera wants a big line, a sweep, continuity, but the separation into a dozen scenes breaks the flow. Musical transitions between the scenes would help as might stronger, finality-defining cadences, or even scenic blackouts.
A Seasoned Cast
The eight principal singers, with their craft and significant experience, did much to compensate for that problem. Zheng Cao has sung six major roles with San Francisco Opera. Bass-baritone Bojan Knezevic, admired in his five major parts for the S.F. Opera, sang the role of the serving-man Davy with a strong, lusty fervor. He was also Henry IV, of an earnest dignity, his rich, deep voice conveying nobility. Tyler Nelson, a young tenor living in Florida, did a captivating number on Justice Shallow. His diction was impeccable and his animation as the silly, ridiculous squire won for him alone laughs that were independent of the lines. His bright, keenly focused, vibrant tenor invites Mozart. He has a big future.

Michael Dean played Falstaff's "lieutenant" Pistol, not as the scruffy rascal seen in the play but, in Getty's view of him, as an "important" stalwart show-off and a kind of herald. Dean's robust, resonant baritone was commanding, with a full and focused sonority. Mischa (for Michel) Bouvier, a young American baritone with an extraordinary and varied background for his years, has a firm, finely directed sound with a distinctive fast vibrato. He used it excellently as a lively Bardolph with a cockney accent. The part of the page, called "Boy," was sung by Robin Massie in a star-bright and shining high soprano, a lively persona. 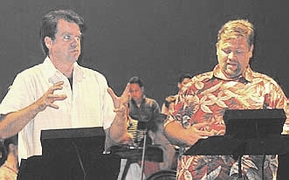 In the earlier Albuquerque performances of May 10-12, the part of Prince Hal/Henry V was sung by great trouper William Lewis, riding a distinguished career. He gave it a fervency, authority, and projection for which he's always been known. The New Mexico Symphony and its fine 100-voice Symphony Chorus (Roger Melone, director), gave just the last four scenes of Plump Jack, beginning with Pistol's announcement of Henry IV's death and Hal's succession. It was a strong performance, but entirely different from that in Mazatlán, because of the larger forces used and the scale of the attractive Popejoy Hall, some three times the capacity of Mazatlán's 800-seater. (The Angela Peralta Theater is a miniature La Scala, with three tiers of iron-filigree-faced opera boxes embracing the orchestra seating.)
Conducting a Second Career
Guillermo Figueroa, in his sixth year leading the New Mexico Symphony, has come to conducting as a second career (earlier he was the Orpheus Chamber Orchestra's founding concertmaster, then violist with the Emerson Quartet). He has one of the more elegant techniques you'll see today — calm, refreshingly undemonstrative as he conducts the phrase, not so much the beat. Next spring Figueroa will be one of the Berkeley Symphony's guest conductors, and also will conduct Symphony Silicon Valley in San Jose. After a clear performance of the Getty's four scenes, he led Tchaikovsky's Romeo and Juliet, Fantasy-Overture, in a highly musical reading. (There's nothing much he or any conductor can do about the piece's tasteless slam-bang ending.)

Then followed Respighi's Pines of Rome, sensitively done, atmospheres nicely shaded and shaped. The organ was a big help in the later going because the hall's poor bass response seriously undersells the cellos and basses. The solo trumpet, John Marchiando, was first-rate, and James Shields' floating clarinet solo in "The Pines of the Janiculum" utterly beautiful. Naturally, "The Pines of the Appian Way," the finale of finales, with extra brasses in side boxes, brought down the house.

Returning to the principal matter, Plump Jack, the premiere of what Gordon Getty regards as essentially the final version, was performed four times, staged, at the University of Texas at Austin in the third week of April preceding the Mazatlán concert performance. Next, it will be recorded, perhaps after more fine-tuning. Of course, it's an entrepreneurial investment for him, but that's no different from the self-publishing that authors do regularly today.

Shakespeare gave Pistol words to describe the history to be played out during Henry V's new regime: "the kingdom for a stage." That might well be Getty's view.