San Domenico School’s Virtuoso Program, which will travel from its San Anselmo home to San Francisco for a showcase program here on March 29, goes back to Venetian girls’ orphanages in the 17th century. That, at least, is what the program’s founder, Faith France, told me many years ago. She was teaching music at San Domenico, a small independent school in Marin (which originally opened in Monterey in 1850), when she had an epiphany while visiting Venice. 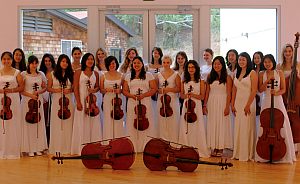 There, in 1977, she experienced the ancient but vibrant tradition of music-making by the young girls at the Conservatorio dell’Ospedale della Pietà (Conservatory of the Hospital of the Pietà), the orphanage where Antonio Vivaldi himself had once taught and composed. France returned to her own girls’ school — a fine institution, but one that taught music only as one of the subjects — and created the Conservatory of Music and Virtuoso Program. Take a listen to how far they have come.

Extended, intensive string training for “ordinary” students (those with a normal academic load, who are not yet pursuing a music career) followed, along with a choral program, and then annual tributes to Vivaldi, which begin, as in the Ospedale, with young girls in long white dresses, flowers in their hair, filing into the music pavilion, playing handbells and singing Gregorian chants. Then they perform chamber music on an astonishing level. Again and again, as I have watched the Virtuoso Program over the years, what struck me was the flowering of musical talent in an institution that is in no way a music school.

While not taking the Conservatorio model to the point of recruiting orphans, France did create a program for needy students, many from recent Asian immigrant families. Over the years, she helped to launch the careers of Jannie Lo (Peabody Conservatory), Jihyun Yun (Eastman School), Maggie Barr (UC Santa Cruz), Jennifer Chen (Wellesley College), Samantha LaValley (Cornell University), and many, many others.

Other career musicians from San Domenico include Hai-ye Ni, who graduated from assistant principal cellist of the New York Philharmonic to principal cellist of the Philadelphia Orchestra, and New Century Chamber Orchestra violinist Karen Shinozaki. Most recently, violinist Margot Schwartz is now a member of the Milwaukee Symphony and Jennifer Chang, class of 2004, is with the New World Symphony in Miami.

While France was the brain and heart of the Virtuoso Program, a series of distinguished music masters did the teaching, training, and conducting. From tim 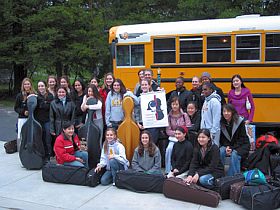 e to time, surprise visitors, such as Yehudi Menuhin, accepted France’s invitation to San Anselmo. The head of the program since France’s retirement five years ago has been Robin Ravazzini, and the violin/viola coach and music director for the past decade has been George Thomson, a prominent conductor in the Bay Area. He says of the Virtuoso Program:

Ms. France started the Virtuoso Program with four students — one string quartet. The goal then, as now, was to provide an opportunity for talented string players to pursue ensemble training at a high level as part of a college-prep high school curriculum — not as an extra on the weekend but an integral part of the high school experience.

What started as one quartet soon became four — one per class — as France connected with more and more individuals who shared her vision and were in a position to help. As the ensemble grew, the chamber orchestra became another focus of the program, though chamber music has always continued as the core element. Each student participates in both, and the experience of quartet playing informs and enhances their skills as orchestral musicians.

There are no “typical” students in the program; players are accepted at various levels, “but at only one level of eagerness and commitment — the highest,” says Thomson.

Some students have been hard at work since the age of four, and others have only recently discovered their love of the instrument. Hours of practice and the nurturing influence of like-minded colleagues allow the eager player with less experience to catch up quickly and make outstanding progress.

We don’t expect that everyone entering the program will graduate wanting to pursue music as a career — some do, some don’t. If that’s what they want, the time for them to do the hard work is now, during high school. Whatever their eventual career choice, we hope they will carry with them a passion for music and a respect for its role in our culture — something they can support and enjoy as the years go by. 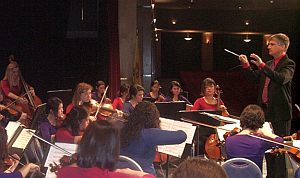 Thomson has led the Orchestra da Camera in repertory from the 17th century to the present, including commissioned work. When the American String Teachers Association (ASTA) started an annual nationwide competition for school orchestras, San Domenico entered and won. They won again subsequently, and have been regularly winning acknowledgments and prizes.

The Orchestra da Camera on March 29 will feature two sisters, violinist Mayumi and cellist Mariko Wyrick, in the Brahms Double Concerto, with the student orchestra supported by members of the San Francisco Symphony, including the soloists’ parents, associate principal cellist Peter Wyrick and violinist Amy Hiraga.

As to the future, Thomson says:

I am hoping to return, with the Orchestra, to the National Orchestra Festival in 2010 (when the competition is in Santa Clara, thankfully for our budget). We are continuing with a new collaboration with the Marin organization Bread & Roses to bring all of our chamber groups to local audiences on a regular basis.

We have been fortunate in being able to bring some of the country’s finest string quartets up to our campus for visits and master classes, and we are hoping to expand that part of our program. Times are tight, of course, and we need to keep making those connections that Faith France was so great at making — reaching out to people who realize that music as part of school is a great idea. We hope that our upcoming concert in San Francisco will introduce us to some of those people who might not have heard of us before.