Composer Elliott Carter has been around for 100 years, literally. For 60 of them he has been at the forefront of serious American composition. But, like so many 20th-century composers, his music has had more limited exposure to audiences than his genius warrants. But that may be changing now. Next weekend, San Francisco Performances will divide two concerts devoted to his work between two generations of "young artists." The Pacifica Quartet will play his five string quartets on Saturday, Dec. 6. The next day, Dec. 7, Ursula Oppens will perform Carter's complete works for solo piano. Robert Greenberg will present substantial lectures preceding each concert, both at Yerba Buena Center for the Arts. 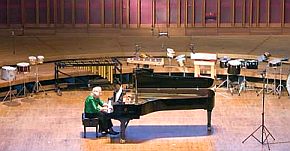 Oppens is a pianist who has long been closely associated with Carter's work, and is one of the four dedicatees of his magnum opus for piano, Night Fantasies (1980). She recently released a CD of the complete piano music. The Pacifica Quartet is a group of young musicians who make a specialty of playing all five of Carter's String Quartets in a single evening. The Pacifica's marvelous recording of the First and Fifth Quartets has even received the composer's imprimatur: He calls them "amazing."

Carter's piano music spans six decades and the string quartets only a few years less than that, so next Saturday and Sunday we will have the opportunity to sample his astonishing lifetime of musical discovery — twice! And since these six decades roughly cover my own generation, I feel the occasion offers a rare chance to revisit some of my musical experiences as they relate to the work of this remarkable centenarian. 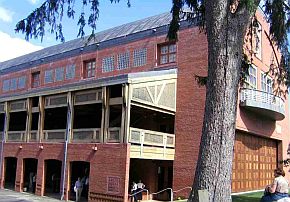 This past summer, "The Carter Century" was celebrated with a fabulous (to use his own word) five-day festival at the Tanglewood Music Center, conceived and organized by James Levine. At the last minute Levine had to withdraw for medical reasons, and several other noted Carter conductors took over in his stead. Ten concerts devoted to a single composer are a risky undertaking, but in Carter's case they proved to be a revelation. In each new work the composer sets himself a fresh task, and so it was for us in the audience. (Carter was, by the way, present for the entire festival.)

The 47 works played that week demonstrated what probably amounts to the most prolific and creative "late period" outpouring of any artist. As the festival progressed, musicians and nonmusicians alike seemed caught up in the seemingly limitless variety of the composer's imagination. From the Elegy for Cello and Piano (dating from Carter's 35th year) to the otherworldly Soundfields for string orchestra (composed in 2006, his 98th year), to the delightful Mad Regales for a cappella chorus (2007), the music sounded gripping and full of life.
Brave Youths Take the Stage
To think of all those cluttered instruments, one to a fact, cancelling each other's experience.
— Elizabeth Bishop
Part of what made the festival so successful, and something that must have been extremely gratifying to the composer (indeed, he said that some of the performances were among the finest he had ever heard), was that, except for the final concert, presented by the Boston Symphony, almost all the players were under the age of 30. To them, Carter was not a difficult modern composer, or if he was, they did not play him that way. I heard a dress rehearsal of the Concerto for Orchestra in which conductor Oliver Knussen tried to get the "kids" to save their energy on the second time through the piece (a heroic accomplishment in itself), only to have them play it on the second run-through with even greater energy and passion. 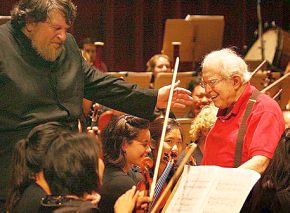 For me, it was a staggering experience to hear that work for the first time, since for years it had been passed over as being "too difficult" (or worse). Part of its daunting reputation lies in the drama of our seeing the double basses standing where the cellists are usually seated and eight percussionists with their huge array of instruments wrestling with all manner of rhythmic complexities. As the players link together phrases that become much longer lines when they circulate through the ensemble, it is the spatial element that proves crucial. At the climax, the sound reaches the listener in waves that are absorbed physically. This cannot be conveyed by analysis, or by a recording. It must be heard and felt, live. You need the reverberation in the concert hall to experience the elemental power of Carter's music. I hope we will hear the work at Davies Symphony Hall, the next time Knussen returns to guest conduct the San Francisco Symphony. 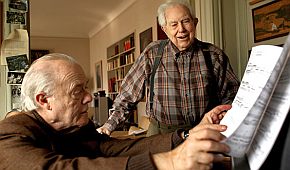 Charles Rosen and Carter at his apartment in New York

At Tanglewood, the works for smaller ensembles were impressively played by the students — sometimes joined by artists with long experience with Carter's music: musicians such as Oppens, as well as Fred Sherry, Charles Rosen, and Lucy Shelton. In each case the young musicians held their own and even added touches that showed that they were loving every septuplet. During Luimen (1997), a piece for guitar and various plucked instruments (played beautifully last month, by David Tannenbaum and the San Francisco Contemporary Players, and reviewed here), Carter literally sat up and beamed when the harpist tossed off a flurry of six-note clusters as though they were simple arpeggios.
The venerable song falls from your fiery wings,
The song of the great space of your age pierces
The fresh night.
— Wallace Stevens
My own favorite vocal work in the festival was the cycle of five poems by Wallace Stevens, titled In the Distances of Sleep, conducted by Jeffrey Milarsky. Carter's music is notoriously hard to get completely into on first hearing, but so convincing was mezzo-soprano Kate Lindsey that when she came to the last song, "God Is Good, It Is a Beautiful Night," there was no doubt as to the poem's truth.
Coming to Prominence
Elliott Carter first came on the musical scene at the close of World War II with his Holiday Overture, which he wrote to celebrate the liberation of America's GI's in Paris. Apparently, it was no "holiday" for conductor Serge Koussevitzky, who found it too difficult and kept postponing the first performance. Carter now says that this piece was actually a demonstration of all the counterpoint he learned as a student under Nadia Boulanger in the French capital. What made him want to become a composer, he claims, was hearing The Rite of Spring performed by Pierre Monteux; his meeting Charles Ives was also clearly decisive.

In the Cello Sonata (1948), played recently at the wonderful Berkeley Chamber Performances recital by Monica Scott and Hadley McCarroll, Carter quotes the first four notes of the main theme from his "Concord" Sonata. It is like an affectionate look back at a time in his life before he embarked on the path that he has so faithfully — some might say "stubbornly" — trod to this day.

I first met Elliott Carter in the late 1960s, in a tiny practice room down the hall from where he taught his composition class. Not many students at the Juilliard School were playing his music in those days, and when he heard me practicing his piano sonata (written some 20 years earlier), curiosity got the better of him and he opened the door. He looked a little embarrassed and, as if talking about music by someone else, said, "I thought that sounded familiar." When I asked whether I could play the sonata for him on the spot, he agreed. 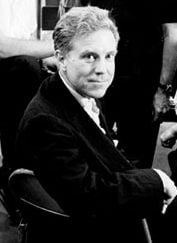 Elliott Carter at the 1961 recording session

After I had played this difficult piece, which I loved so deeply, I remember him saying, "You know, I'm writing very different music now." (He was speaking of two major works he completed in the 1960s: the Piano Concerto in 1965, and the Concerto for Orchestra four years later.) And so it has gone, decade down through decade, with performers and listeners struggling to keep up with the ever-fertile imagination of the composer whom Milton Babbitt once called "the best we have."

Performances of Carter's music were fairly rare during the 1960s. One recording, of the First String Quartet, had an intensity that stood out amid the much "cooler" sound of Pierre Boulez and other avant-garde compositions from the 1950s, which typically had a static, spaced-out quality no matter how fast and furiously they were played. Carter's music was different: It really went somewhere. The simultaneous projection of different speeds by the four strings in the Quartet made me want to check whether the record on the turntable had somehow changed to 45 rpm. The genie had been let out of the bottle, and there was no stuffing it back in.
Magical First Live Hearing
The first live performance I heard of a Carter work was of the Double Concerto for Piano and Harpsichord. The unmistakable Carter traits — notably, the fluid continuity of rhythm, which lay outside the experience of both me and many of my performer-colleagues — are beautifully demonstrated in a properly balanced performance of this work. It was magical to hear how one orchestra could slow down while the other sped up, which is akin to what we observe of cars when we drive in freeway traffic.

I remember looking at the score and being amazed at how much more complicated it appeared than it sounded. "How do they keep together?!" was all I could think of, initially, and yet years later I could hear details (in the Tanglewood performance, conducted by Oliver Knussen) that somehow gave me the feeling that all the instruments were like individuals who were speaking directly to me.

Despite the fact that Carter has said that he writes for recordings, probably for the clarity they provide, his music only comes fully to life when heard in performance. My first hearing of the Piano Concerto was on the excellent recording of Jacob Lateiner’s premiere performance of the work with the Boston Symphony; even with a score in my lap, I felt lost. In the maelstrom climax of the second movement, where every instrument is playing something different, the dynamic range cannot really be conveyed on a recording. Moreover, Robert Helps told me he had seen the sound engineer turn down the level during the final mix, probably hoping not to damage home speaker systems. In Carter's music, nothing can fully prepare you for the actual sound of the live orchestra. What looks like chaos feels like being inside a whirlwind when it is actually being played.

During an intermission at Tanglewood, I told Carter that I had the privilege of performing his piano concerto two years ago, with George Thomson leading the Berkeley Symphony Orchestra. "It took 40 years," I said, "but it was worth the wait." He smiled and, without missing a beat said, "Which one?" I had forgotten about the two piano concertos that Carter had written since. And then I remembered the upcoming premiere of Interventions for Piano and Orchestra, to be played in Carnegie Hall by Daniel Barenboim and James Levine on Carter's 100th birthday next week.