Who is Sofia Gubaidulina? Audiences unfamiliar with the name (pronounced goo-bye-DOO-lee-nah) may be surprised to learn that she is one of the most distinctive, highly regarded composers in the world today.

The Russian-born, German-based Gubaidulina has earned high praise from an international list of critics, conductors, and fellow composers. Yet performances of her music — which is alternately described as pure, profound, spiritual, psychedelic, shattering, and utterly unique — have been scarce in the B 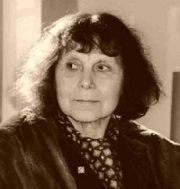 That’s about to change. With the composer arriving to take up residency at the San Francisco Symphony this month, those coming to Gubaidulina’s work for the first time have an extraordinary journey of discovery in store. Aficionados, meanwhile, will have the chance to hear some of her music for the very first time.

From Feb. 18 to 28 at Davies Symphony Hall, the orchestra will present two weeks of concerts and events celebrating the music of Gubaidulina. The principal attraction is the U.S. premiere of the composer’s Violin Concerto No. 2, In tempus praesens, conducted by SFS music director Michael Tilson Thomas and featuring violinist Anne-Sophie Mutter (Feb. 26-27). Under Kurt Masur, the orchestra will also perform Gubaidulina’s The Light of the End (Feb. 18-21). A chamber music program featuring the premiere of her Repentance with David Tanenbaum completes the lineup (Feb. 22.)

Throughout the two weeks, the 77-year-old composer will be in San Francisco, participating in a new residency program being launched by the Symphony. Gubaidulina’s arrival inaugurates the Phyllis C. Wattis Composer Residency; it also marks the composer’s first visit to the Bay Area. During the residency, she will participate (with the aid of a translator) in preconcert discussions at four performances.

In all, the two weeks of concerts, premieres, and — perhaps most significantly — the opportunity to hear Gubaidulina speak in person about her work are certain to illuminate the life and philosophy of a fascinating contemporary artist.

The SFS has played a handful of Gubaidulina’s music in past seasons, beginning with a 1995 performance of Astor Piazzolla’s Le grand Tango, for violin and piano, in an arrangement by Gubaidulina. In 1996, the orchestra played her Quasi hoquetus and, in 2005, her groundbreaking violin concerto, Offertorium. Music lovers who received their first exposure to her work at those performances were doubtless astonished to learn that Gubaidulina had been composing since the early 1950s. As is so often the case, a convergence of history, politics, and art often kept her work out of the public eye.

Sofia Asgatovna Gubaidulina was born in 1931, in Christopol, in what was then the Tatar Autonomous Soviet Republic (now the Republic of Tatarstan). Her mother was Russian, her father a Tatar. When she was very young, her family moved to Kazan. Gubaidulina began playing piano at age 5 (she claims to have started writing music for her own enjoyment soon thereafter), and studied piano and composition at that city’s conservatory. She graduated in 1954, and moved to Moscow the same year to attend its conservatory.

As a student, Gubaidulina embarked on the highly individual path that would diverge from traditional compositional style in Russia. It was a move that alienated her from the Soviet regime — at one point, the head of the Soviet Composers’ Union called her unfit to represent the avant-garde — but one that ultimately afforded her greater artistic freedom.

Like many Russian composers of the era, Gubaidulina first made her living writing for film (her credits include the 1984 film Scarecrow, directed by Rolan Bykov).

Yet her musical development was guided by other sources: an exploration of electronic music (in the late 1970s, she formed the improvisational performance group Astreia); a fascination with rare Russian, Caucasian, and Asian folk and ritual instruments; a deep belief in the mystical properties of music; and an interest in unusual tunings and instrumental groupings.

Architectural form and proportion shape her music, as well; her work hearkens back, and continues to be inspired by, J.S. Bach. She counts Bach, Webern, and Shostakovich (who was an early supporter) as her principal influences. She pays tribute to both Bach and Webern in Offertorium, which quotes a theme from the former’s Musical Offering.

In the 1980s, Gubaidulina’s music began to be heard outside Russia. Violinist Gidon Kremer was an early champion, introducing Offertorium to European audiences. Since 1984, when she was first allowed to travel to the West, her reputation has continued to grow. Her music is now played by major orchestras and she has received numerous commissions. In 2002, the International Bachakademie Stuttgart introduced her monumental two-part cycle, Passion and Resurrection of Jesus Christ According to St. John, commissioned for the 250th anniversary of Bach’s death. In 2007, she was awarded Hamburg’s prestigious Bach Prize as a “pioneer of contemporary classical music” who has forged a link between Eastern and Western music.

Gubaidulina, who moved to Germany in 1991, has composed symphonic and choral works, two cello concerti, a viola concerto, four string quartets, a string trio, works for percussion ensemble, and many works for nonstandard instruments. If there’s a common thread throughout her work, it’s a sense of great striving: the struggle of the artist to overcome the forces of society, of oppression, of fate itself. The composer, describing her process, has said, “Every composition is an enormous labor for me. … It’s still incredibly difficult. It hasn’t gotten any easier, and it shouldn’t be too easy. Otherwise, why do it?”

According to Mutter, Gubaidulina’s compositional strengths come together brilliantly in In tempus praesens. Written in 2006-2007, the five-part score is one of shimmering beauty and almost frightening intensity. 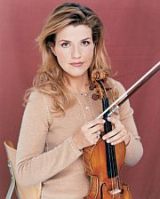 “It’s a 40-minute discourse of incredible emotional content,” says the violinist. “It really has a kind of life-changing power on you.”

In a recent phone call from New York, Mutter said the work creates an unusual, highly charged sound world. “What you will find in the score is quite intriguing in that she doesn’t use violins, other than the solo fiddle. We have the violas and the lower strings. The balance she keeps between the dark colors of the orchestra and the high registers is quite astonishing.

“In the process of composing, she draws a draft of the piece, and she uses two different colors for the high and the low registers in order to visually control the balance. In this piece the balance between the moments of heart-wrenching despair and the very positive and hopeful ending couldn’t be any more perfect.”

In tempus praesens (the title translates to “In the present time”) was commissioned by Paul Sacher for Mutter, who premiered the work with the Berlin Philharmonic, conducted by Simon Rattle, at the Lucerne Festival in 2007. The work is dedicated to the violinist, who has since recorded it with the London Symphony Orchestra under Valery Gergiev.

Mutter, a longtime admirer of Gubaidulina’s, didn’t actually meet the composer until the work’s first rehearsal. She says it was a memorable encounter.

Explosive Mix of Artist and the Work

“You can imagine the level of tension in the room,” she says. “If you’d lit a match, there would have been flames. I played it for her, and that, for me as an artist, was one of the great moving moments; when I finished I was drenched in sweat and blood and she took her glasses off and said something to the effect that this was just the way she always had hoped that it would be played. I was nearly in tears, because I love the piece dearly. I can feel it so intensely; it’s impossible not to love it.”

Since then, Mutter has performed In tempus praesens in France, England, and Germany, and hopes to play it in Russia soon. “It’s just very moving to see how a piece of contemporary music, written in a language which is alien, especially to an audience which is not living with that language every day as we musicians do, connects to people,” she says. “I’ve never seen an audience react so intensely to a contemporary piece as they do with In tempus praesens. No matter in which country, there’s just something in there which is so strong, so persuasive.”

Gubaidulina, says the violinist, “writes with her blood.”

“It’s there, in the way she orchestrates,” says Mutter. “There is so much of her biography present in the score that it is at times almost unbearable to play. Looking at her life story, she was born a Tatar, and she changed to the Christian religion, which of course made her an outlaw in a Muslim world back where she grew up. She was not one of the artists who wanted to be on the flag of the Soviet Union; they wanted to use her, she refused, and that led to a very difficult life. She was not allowed to travel; her music wasn’t played.

“I asked her how she survived all these decades, not being played, not being heard, and she basically said she was looking up. She always was looking up. So I have the greatest admiration for her life, which she’s led in the belief of the better [qualities] in people, in the powers of music, and in integrity, strength, and the willingness to suffer for what you believe in. All of which you can hear and feel in her music.”