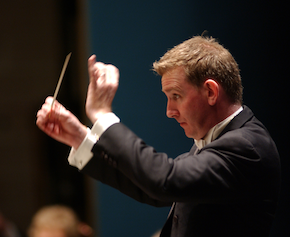 It’s a landmark year for both the Marin Symphony and its music director, Alasdair Neale. The orchestra is in its 60th season; Neale is in his 50th year. The British conductor, who also serves as music director of the Sun Valley Summer Symphony in Idaho, has played an important part of the Bay Area music scene since he moved here in 1989 to take on a three-year gig as associate conductor of the San Francisco Symphony. While he guest-conducts all over the world, he is very happy to call San Francisco home, and pleased to have led the Marin Symphony since 2001. He will conduct that orchestra in a program of Glinka, Bruch, and Tchaikovsky on Jan. 20 and 22 at the Marin Veterans’ Memorial Auditorium in San Rafael.

As you see it, what role does the Marin Symphony play in the life of Marin County, and as part of the larger Bay Area music scene?

Our mission is to bring great music to the community of Marin. Our audiences are very enthusiastic and very responsive. I can sense the level of concentration in the hall. They’re certainly not afraid of showing their appreciation, which makes life much easier for us on the other side of the stage.

What are your feelings about cultivating new and younger audiences?

It’s true that the old model doesn’t necessarily work. The challenge for us is to find ways of engaging an audience that are different from the ways of the past. For any organization, there’s going to be a certain amount of trial and error involved. Social media is, of course, a key to that. I do think we probably will need to refine and update the delivery systems that we use. But the actual product — the core of what we do as musicians — that has to remain intact. Beethoven is relevant. People want to hear music that enriches their lives, that gives a sense of permanence and asks deeper questions of us. Classical music does that so brilliantly.

What do you mean by “updating the delivery system”?

Up to this point, everything has been predicated on the fact that we, as the presenting organization, decide when you come and what you hear. We used to dictate what you wear; I’m happy to say that bond has been loosened, and people feel they can dress however they feel like it. Ultimately, down the line, we need to create a more flexible approach to how people enjoy our music. That may not be in the same traditional format of two hours in the evening, or the middle of the afternoon. I cannot tell you what that might look like, but all options need to be on the table.

How do you approach the process of rehearsing?

I walk into the room with a clear idea of what I want, based on my studies. But I think it’s important to respond to what you’re hearing. Often, I’ll hear a wind player turn a phrase in a way I hadn’t necessarily expected. But as I listen to it and respond to it, I’ll think, That’s beautiful. It’s expressing something powerfully. I’m not going to mess with it. So I keep myself open to as many expressive possibilities as I can. That’s important to me.

People want to hear music that enriches their lives, that gives a sense of permanence and asks deeper questions of us.

How do you program your season? You tend to pair warhorses with new works in interesting ways. Your April program features the Brahms Requiem and a 21st-century work, Within Her Arms, by British composer Anna Clyne.

Musically, the two are separated by 150 years. What they have in common is both works were written in response to the composer’s mother’s death. They have this DNA connection. Both deal with the notion of consolation in the face of grief. Anna Clyne’s piece was written around 2006. It’s for a small string ensemble, so it’s quite different from the Brahms, which is a massive piece for chorus and large orchestra. It’s low-key and understated.

Is this a way to get people to really listen to contemporary music — to put it in conversation with a piece you already know?

I think so. It’s understanding that contemporary music is part of a continuum, and not something to be ghettoized. It’s related to something that came before. Sometimes there’s a stylistic connection; in this case, it’s a philosophical connection. It shows that artists today are asking the same questions they were asking 150, or even 400, years ago. I think of it as tracing a continuous line that is not yet complete.

The programs are anchored with more-familiar pieces. But I have to create a menu for a season. Putting a few unexpected flavor combinations and new dishes in the mix keeps it fresh for everybody. We should be provoking as well as soothing, intriguing as well as comforting. If we’re not engaging the audience’s mind, it becomes lukewarm background music. That’s what you step into elevators for.

For your final program of the season, Joyce Yang will be playing some of the Debussy piano preludes, after which you’ll be playing new orchestrated versions of the same pieces.

I tried something similar up in Sun Valley a couple of years ago with Jean-Yves Thibaudet, and the response of the audience was overwhelming. I think it’s very interesting for people to look at the same piece with two different costumes on, and see the differences. It encourages people to listen more actively, rather than sitting back and letting the music vaguely flow over you. I think this sort of format draws the audience in. It’ll get people talking, I hope.

The orchestrations, by Colin Matthews, are vivid and bold, and anything but bland. They re-create these piano pieces not as Debussy might have orchestrated them. They have a much more contemporary slant to them. In a couple, there’s a reimagining of Debussy’s material itself. They’re not dutiful, by-the-numbers orchestrations. His sound palette is post-Debussy.

You are three-quarters Scottish, one-quarter English, and grew up in Scotland after age 10. Your mother was a music teacher. Was it a natural thing that you took up music?

I think my parents realized at an early age that I was very interested in, and naturally inclined toward, music. But I was never pressured by them either to pursue, or not to pursue, a career in music. They certainly encouraged me to develop my interest.

The thing that matters to me, above all, is that I continue to grow as a musician, and as a person.

There was a conscious, thunderbolt moment when I knew that I wanted to be a professional musician. That occurred when I was 14 and joined the National Youth Orchestra of Great Britain as a flutist. I’d played in other youth orchestras, but for me, this was hitting the big time. The experience of my first rehearsal, which was playing The Firebird under Charles Dutoit, was absolutely galvanizing. That changed my understanding of what music could mean. It opened a vast new horizon for me, and in the process made me realize this was what I was going to do with my life.

When did you decide to move into conducting?

That was a very gradual process. It happened my last year of college, but the groundwork had unconsciously been laid for many years. I started studying scores at age 11, just out of a sense of curiosity. I was interested in dissecting and analyzing and absorbing as much of the repertory as I could. I didn’t realize at the time that was a canny investment in the future! It was just something that fascinated me. I wanted to explore the sounds more deeply.

That’s why I was able to start waving my arms around at a ridiculously young age. The opportunity first occurred at age 14, with a small youth orchestra in Edinburgh. The conductor was Donald Runnicles [formerly music director of the San Francisco Opera]. I became his assistant, and then was the orchestra’s main conductor by the time I was 16.

My senior year at Cambridge [University], I really had to start thinking ahead to the future. I had a ton of conducting experience at Cambridge, but I was hesitating at one point, and my academic advisor helped me realized this was how I could best use my talents. He helped me find it within myself.

You then went to Yale for graduate study. How did you get there?

Based on the recommendation of a friend from Cambridge, who had gone there to study cello. I had a very high opinion of him, and I knew he had high standards. He wrote me and said, “You should come here and study with Otto-Werner Mueller.” So I did, and I learned a huge amount from him. He gave me a very good basis in technique. He brought home that you absolutely have to be prepared. It’s like an actor: You have to know your lines.

You stayed on at Yale for three years, conducting the undergraduate orchestra. What then brought you to San Francisco in the late 1980s?

The San Francisco Symphony called me about auditioning for the job of associate conductor. I thought, I’ve got nothing to lose. Why not? So I hopped on a plane. I remember rounding the bend on the road from the airport, as the skyline came into view. I thought, This is so beautiful! I really want this job!

Do you have a long-term goal — say, becoming music director of a major orchestra?

I don’t think like that. I really don’t. The thing that matters to me, above all, is that I continue to grow as a musician, and as a person. My goal is to be a better conductor in my 50s than I was in my 40s. I just turned 50 last summer. I celebrated in the most wonderful way: The night before, in Sun Valley, I conducted Mahler’s Sixth Symphony.

The one that ends with those crushing blows? That’s not exactly a celebratory or uplifting work!

I know! I had to tell people, “Don’t read anything into this. It’s not a midlife crisis!” In fact, it was a great challenge and a very affirmative experience.