This event has been postponed. New dates TBA.

Long Beach Opera is the little company that could, considering the troupe’s history of not only staging new or little-seen works, but also taking opera out of the concert hall and putting productions into unorthodox venues, all on a relatively small budget. Credit Andreas Mitisek, then, with raising LBO’s profile and bringing in new audiences to the art form.

LBO has been an artistic home to Mitisek since he was named principal conductor in 1998, assuming the position of artistic and general director in 2003. Indeed, Viennese-born Mitisek has been the driving force behind every new LBO concept and production since taking the reins of the company, upping the number of operas from two to five per season, tackling such topics as spousal murder and death row, while also managing to expand the operating budget from under half a million dollars in 2003 to $1.6 million in 2018. Subscriptions have grown by a whopping 500-plus percent, as well.

Mitisek’s operatic cred is undeniable. Having been music director of the Wiener Operntheater from 1990-1997, he has also conducted at the Wiener Volksoper, Berlin’s Komische Oper, and has been a guest conductor in North America, leading productions for, among others, Vancouver Opera, Opera Theatre of St. Louis, and Seattle Opera. In addition, Mitisek was general director of Chicago Opera Theater from 2012 – 2017, all while working his magic at LBO.

But Mitisek’s tenure with LBO comes to a close at the end of the 2020 season, his departure having been announced last summer. (The Industry’s Yuval Sharon was named as interim director while a search is on to name a successor.) The Austrian’s operatic mojo, however, is still in high gear, as he’ll not only direct Peter Maxwell Davies’s The Lighthouse, which will have four performances (now postponed due to the coronavirus), but has also designed the video and production for the work.

I spoke with Mitisek on a range of topics, including the Maxwell Davies opera, which he’s staging at the Aquarium of the Pacific’s new 300-seat Honda Pacific Visions Theater, an interactive space boasting cutting-edge, high-definition technology, with a 34-foot-tall, 180-degree wrap-around projection wall, and rumbling seats, with wind and sea-spray effects.

As you’ve previously mounted works in a parking garage — from Grigori Frid’s Diary of Anne Frank in 2007 and in an Olympic-size swimming pool for Ricky Ian Gordon’s Orpheus and Eurydice in 2008, to having performances inside the hull of the Queen Mary for Viktor Ullmann’s Emperor of Atlantis in 2009— I’m curious about your attraction to site-specific stagings and why the Honda Pacific Theater for The Lighthouse?

We somehow pioneered it in many ways in the opera world, as such. I’m interested in places that reflect the stories we tell. It makes it sometimes more interesting, more immersive for the audience. It’s everyday spaces that can be something else. It started with a parking garage and a swimming pool, like you said, and this space especially I was drawn to the possibilities of the big screen. It’s similar to an IMAX, and the story is associated to the sea, an aquarium, water, all of that.

We had also been looking for something to collaborate on since we did The Paper Nautilus [in 2012] by Gavin Bryars and since the new space just opened in the beginning of this year, we had been talking about it and I feel that the story about the lighthouse and the disappearances there fit it perfectly. 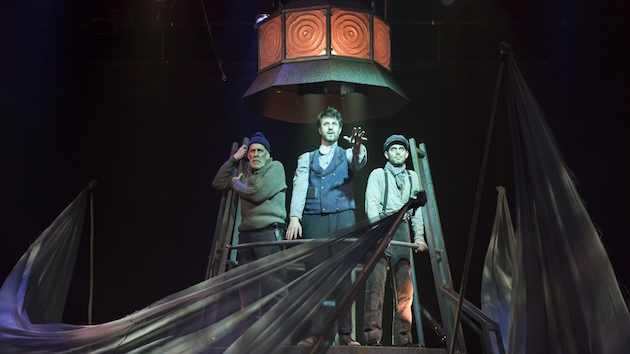 You’ve conducted more than 40 operas for LBO since 1998, but Stephen Karr is conducting Lighthouse, which is a modern, sea-based thriller based on the true story of three lighthouse keepers who disappeared from a remote Scottish lighthouse in 1900. Why did you decide not to conduct and where will the singers and orchestra be?

I decided not to conduct because I’m directing and designing, so I gave myself one less role. I wanted someone who is just focused on the music. It’s a pretty tricky score for the singers and they need a lot of attention. It’s also an amazingly beautiful score and very immersive, from the musical side.

[We’re] building a structure in front of the big screen and [the performers] will be basically in an area that is in front of that. There are amazing sight lines from every seat and I have three towers of structures that play with the idea of the lighthouse [with] projections all around it. The singers will be up and down and around.

I will be filming with the singers — close-ups of different scenes that will be projected during some of the scenes. Sometimes there will be an intimate moment blown up to a gigantic counterpoint [that] provides interesting content. I’ve played a lot with filming and this is a great opportunity to use the singers themselves. I’m not trying to create a film narrating the story but more the undercurrent of what’s going on underneath the surface that can be presented just by a look, a hand, a gesture, in the context of what’s going on.

How did you go about choosing operas to present over the course of your tenure at LBO? Was it generally with unconventional venues in mind or did that concept evolve over time?

It was always in mind with exploring locations in our community — I should go back and count how many I’ve done during my tenure. But my selection was always, ‘What’s the story that needs to be told with music that should be heard?’ I always want to tell a story we can relate to, that has connections with who we are today, that makes someone come away with an experience they didn’t have before.

It’s not in our genetic footprints to do Toscas and Traviatas. I have some ideas, but my time is up. I’m always driven by the story and everything starts with ‘why?’ Why should we tell this story, why should anyone care? Sometimes we succeed and sometimes we don’t. That’s the risk we take. My hope in the long run is that it’s been more on the positive side, but you’d have to be asking other people about that.

You’ve worked with a core group of artists on many productions, including lighting designer Dan Weingarten and sound designer Bob Christian, both of whom are collaborating with you on The Lighthouse. Why has that been important to you?

Once you work with people there’s a certain language to develop and it’s easy to say things, especially with lighting. It’s important to work quickly with lighting and with someone who speaks a similar language. When I say certain things, Dan knows immediately what I’m talking about. This has been a wonderful partnership and I’m really grateful to him.

Bob has basically been our house designer for all these years, especially in site specific, where it has to be flexible, organized, and quick. He has become an integral part, where you need to make sure things can bear it. These have been two long-time collaborators and I really appreciate it. And it’s not that we won’t work together again, because it’s a small world in arts production and opera. 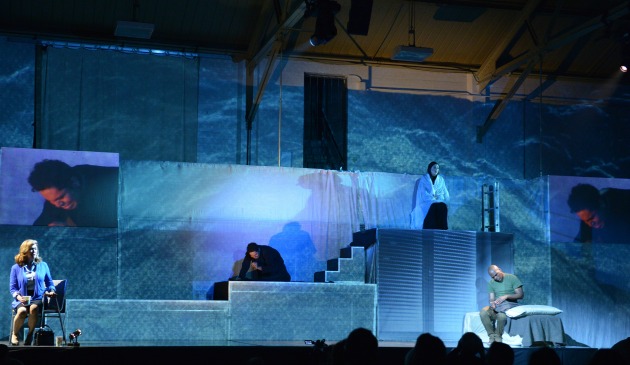 Do you feel you’ve achieved all that you set out to achieve with LBO and what have some of the highlights been?

It’s been a great journey and I’m happy with the general direction it all took. I haven’t yet spent the time to look back over my 20-something years and evaluate it. But there have been some memorable spaces — [Tobin Stokes’s 2016 premiere] Fallujah at the Army National Guard in Long Beach. Those are very memorable moments and Fallujah in that space was very powerful — the way it could connect with the community and to connect in a space that had relevance to the story. I also loved [Philip Glass’s] Hydrogen Jukebox at that space [Crafted at the Port of Los Angeles]. I should have thought more about this and made a list.

You’re closing out the season with two more productions that you’re directing: Robert Xavier Rodríguez’s, Frida, from 2016 (June 20 for four performances) and the U.S. premiere of Billy The Kid, with music by Gavin Bryars and a libretto by Michael Ondaatje (May 3 for four performances), which will be set at Long Beach’s historic Sunnyside Cemetery. You’ve had an ongoing relationship with Bryars, having mounted the U.S. premiere of his Marilyn Forever, an opera about Marilyn Monroe featuring two Marilyns, the inner and outer, in 2015. But did you know Ondaatje?

Ondaatje is a great friend of Gavin’s. He sent a message and out of curiosity he wanted to know why I decided to stage Billy The Kid at a graveyard. I responded to him that my inspiration — that a lot of Billy’s life — ended in the graveyard. The first scene is a description of a lot of the people he killed and he stands in a graveyard talking about it. It was a natural.

I had always had Sunnyside Cemetery on my radar, since last we did Gavin’s piece, Marilyn Forever — we shot part of the movie scenes in the graveyard — so there was a connection to Gavin in the cemetery. Gavin also had only conceived one Marilyn and I made it two, so he’s curious to see what I will do with Billy.

Why did you decide to step down as artistic director of LBO, what will you be doing next, and will you stay in L.A.?

I had no urgency to leave from someone, but I just decided I needed to move. Sometimes you have to close the door to push yourself into another direction. I just felt it’s time — time to open another door for me to do something else.

[Regarding living in L.A.] I have no reason to move, because once you get to California it’s hard to leave. I have some projects — some freelance work as a director — but I’m also taking a little break for myself, to give myself time. I’ve been so busy these years, including five years with Chicago, so it’s not that I’m slowing down but that I also need time for new things.