There’s no shortage of descriptors for the soprano voice type. Dramatic. Lyric. Coloratura. Spinto. Soubrette. Not to mention the mezzo-sopranos, either lyric or dramatic, coloratura, or not. But even with all this vocabulary, some voices still raise questions. If they don’t defy categorization utterly, they at least make it more difficult.

Anna Caterina Antonacci’s early career, which began in Bologna in 1985, was noted for her interpretations of Rossini heroines, especially those the composer had written for his wife, a mezzo-soprano by the name of Isabella Colbran, who had a remarkable upper extension to her voice. While Antonacci had what might be called her breakout success with the mezzo role of Carmen, opposite Jonas Kaufman’s Don Jose at Covent Garden in 2006, before that, around 2005, in her forties and the mother of a young son, Antonacci decided to make the move to soprano official. She has now taken on soprano roles such as Cherubini’s Medea, Elisabetta in Maria Stuarda, Vitellia in Mozart’s La clemenza di Tito, and notably Rachel in La Juive in Paris. 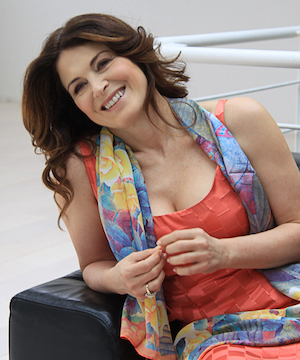 Antonacci is known for her dramatic stage presence. Fans are also intrigued by the timbre of her voice, her creative musical interpretations and character choices, and her interesting choice of repertoire, including Poulenc’s La Voix humaine, which she will perform here in San Francisco, in the intimate space of the Opera Lab’s Taube Atrium on March 11, 14, and 17. After being offered a role at the Metropolitan Opera and then having the offer rescinded and given to a bigger name singer there are no plans for her to sing at that house, but this doesn’t seem to trouble her greatly if at all.

Antonacci continues to stand out among her peers, improvising her path, accepting and creating opportunities that please her and make best use of her unique instrument.

Born in Ferrara, Italy, near the city of Bologna where she studied and made her debut, she currently makes her home in Geneva, Switzerland, although it is also fair to say she is at home in Paris, a city with audiences who are keen on her particular appreciation for French repertoire. She responded to our questions via email.

Did voice teachers have trouble identifying what kind of voice you are? And did you ever get into vocal trouble because of that?

There were doubts at first, but I simply chose the roles that complimented me. Rossini’s Colbran roles, Mozart, Monteverdi. And I wasn’t worried about the definitions. When I had vocal problems, they were not because of this. I never pushed the voice where it couldn’t go.

Maestro Riccardo Muti has described your voice as a “Falcon” type of soprano. What would you call your voice type?

Maestro Muti flatters me in so describing me. Cornelie Falcon had, in fact, a legendary career [in Paris, in the 1830s], though very short, and her extraordinary voice inspired all the musicians of her era.

You’ve said that French music “belongs to my soul now.” Was it Cassandre [in Les Troyens, 2005] or Carmen that really opened the door to French music for you?

To be given the job to play the role of Cassandre at the Theâtre du Châtelet, it was stupendous to work on the pronunciation and the style during the rehearsals with [Sir John Eliot] Gardiner and [stage director Yannis] Kokkos.

You have such a variety of repertoire. Why does this appeal to you more than doing the same handful of roles, as many singers do? Does the variety help you to explore the boundaries of a very unique instrument?

The change of roles has followed the course of my life, my maturity, and my curiosity for this or that historical or cultural movement period, as well as my affinity with different types of expression. I am completely different today from how I was at 30, and the roles have followed this evolution.

You are a film fan. How has Jean Cocteau’s sensibility influenced you? And how does it affect your approach to La Voix humaine?

Cocteau was a versatile artist and nonconformist, who spoke all languages, of painting, theater, cinema, literature. Here is a character who defies labels and definitions! His creative sensibility never ceased to change and evolve throughout his life. He was always trying new and different expressions. In Voix humaine Cocteau identifies with [the character of] Elle and staged the agony and anguish of abandonment that he himself lived. The loneliness and emptiness is represented with so much originality in the monologue and conversation without answers; the woman remains alone. 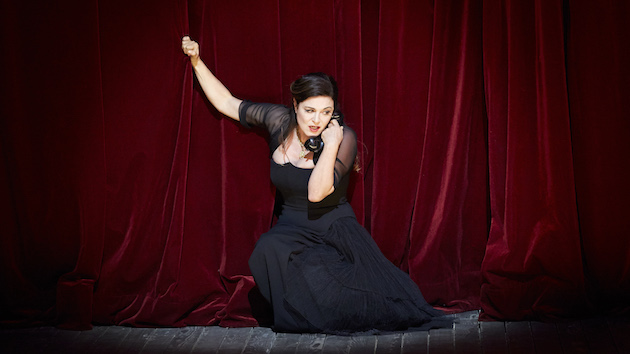 Can you talk a little bit about the Card Aria (En vain pour éviter) in Carmen? I love this piece and feel it is a bit overlooked, and you seem to have a sense of its importance.

It is true that it is a moment that is sometimes unfortunately unnoticed. Carmen for the first two acts is expressed only singing real songs — Habanera, Seguidilla, Chanson Bohème — saying very little about herself so far, but involving the public in festive and boisterous rhythms. The Card Aria is at a moment of feeling lost, at night and lonely.

In the trio with the cards, Carmen finally shows fragility, in her own way, facing the premonition of death, we feel her to be surprised, and fearful. Carmen does not doubt for a moment the veracity of the response cards, and accepts her fate as inevitable, but we see her drop the mask of carelessness, being challenging and reckless. Here she leaves behind the clichés to show her humanity.

Your father was a judge, and your mother was a psychiatrist. Please talk a bit about how your upbringing has influenced you. I’m a judge’s daughter too, and I wonder, did you ever feel that there is some connection between the careers of law and opera, perhaps in terms of trying to be persuasive in front of an audience? And did having a parent as a psychiatrist give you an interest in psychology that you use with your characters?

The ritual of the court has something theatrical in it. The judges have a costume, make a solemn entrance, a sort of affair follows, often with a final surprise, and twist, all observed by a public audience. My father told me that he was often very emotional when he had to read a serious judgment. But I think the similarities with the lives of the artists stop here. With my father I shared a great passion for music. He had dreamed of becoming a professional musician, and all his life has followed and encouraged me. He suffered with me but without saying anything, in times of difficulty or crisis.

My mother was a psychiatrist but not an analyst. She actually worked in psychiatric hospitals, with serious cases of insanity. She advocated for the closure of asylums, following the trend of the 1970s and the work of Dr. [Franco] Basaglia, who worked for the more humane and personalized treatment of the mentally ill. Since my mother died young, she did not see the actual closure of these hospitals. As a child I spent time with her in those departments and watched with great curiosity these people overwhelmed by madness. They were no longer themselves, but someone else. This being two people at the same time, changing that way, fascinated and frightened me a lot. Certainly I found a parallel between this split and the actor's work.

You’ve said you admired Régine Crespin. How did you come to meet her, and what was that like?

I wanted to meet Régine Crespin because I found her in all the recordings that interested me. Cassandre, Carmen, La Juive, Alceste, Iphigenia, Les Nuits d'été, Scheherazade, Debussy — everywhere she was the example, she was the most important point of reference, and her performances always fascinated me. A mutual friend, André Tubeuf, invited us both to dinner, and so I finally met her in person. I was very intimidated, of course. I found her to be an intelligent and honest woman, curious about others and open. I later visited her in her home. Once she even gave me some advice, very fair, about Carmen and Les Nuits d'été. She was struck by the fact of the personal suffering that the singing career involves: renouncing having a real life, not ever really being able to participate in the life of our loved ones or friends, because one is always elsewhere or worried about the voice, or the performances. As the years pass you cannot recover the time that you have been absent. I felt very close to her, but also that she was a great artist.

You’ve said that when you retire you will do something besides opera, and you won’t become a teacher. What are your current plans for retirement? Will you return to Italy?

I do not know if I am suited to teaching. Many things interest me outside of music, and I regret not being able to devote myself to more things in life. But about retirement, I change my mind all the time and I do not have any real plans. Ideally I would like to retire to a garden — like Monet.