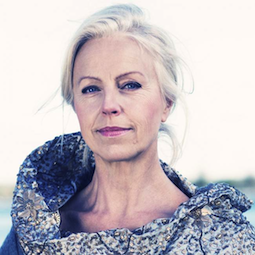 Thirty-one years after her operatic debut, mezzo-soprano Anne Sofie von Otter continues to confound expectations. As much as she is known for her embrace of Baroque music, the standard German romantic repertoire, and Scandinavian song, she has also recorded the music of Elvis Costello, ABBA, and other pop icons, and has collaborated with jazz pianist/composer Brad Mehldau.

On Jan. 23, von Otter joins pianist Emanuel Ax in Cal Performances’ Zellerbach Hall for the first of two “Brahms and Beyond” concerts. (Ax returns on Feb. 26 with Yo-Yo Ma.) Not only will she sing some of Brahms’ most beloved and engaging songs, but she also ventures into the unknown by premiering a work written for the project, Nico Muhly’s So Many Things, for mezzo-soprano and piano.

Graciously persevering in our phone chat through the tail end of a cold (until coughing took over), the beautifully voiced, exceptionally poised artist managed to touch on the arc of her career while discussing her forthcoming return to Berkeley.

You can help me right off with the correct pronunciation of your first name.

I heard you last summer in Salzburg in Julius Caesar with Cecilia Bartoli, Philippe Jaroussky, and Andreas Scholl, and you were wonderful. Now I’m listening to your new two-CD set, Douce France [on the Naïve label], and loving how you spin your voice so freely. Your love of singing really comes through. Did you ever think, when you began your career, that you’d be going strong and singing so well at this point in your life?

I didn’t think about that at all. I only started thinking about the future sometime after I passed 40, because when you’re young, you don’t think about what’s going to happen when you grow old, I don’t think. You take for granted that somehow you’ll live forever.

When I was young, I sang because it was fun. I didn’t have any plans, and I didn’t know what kind of singer I wanted to be. When I started in the choir in my teens, choral singing was what I wanted to do. Then I discovered it was fun to take singing lessons and sing solo, so I wanted to do that. I never wanted to be famous, or standing on the Metropolitan Opera stage, or anything like that. Things have come to me, and that’s wonderful. But I did it then, and I’m doing it now, simply because I love the music so much.

You’re singing a new work by Nico Muhly. I always find it encouraging when, at the time in their careers when singers can coast on repertoire they already know, they tackle new works. Have you had many pieces written for you over the years?

No, just a few. I’m not very proud of myself when it comes to contemporary music. I’m not like Dawn Upshaw or other singers who really have encouraged composers to write for them.

I’m always a little bit wary, because you never know if you’re going to like it. As I said before, I sing because I love what I’m singing so much. With new works, you don’t know if you’re going to love it; you might despise it, or find it too hard. There are things that I’ve sung that I know are very, very beautiful, but I don’t enjoy them because they’re not well written for the voice. That means I will never sing them again, which is a great shame, because somebody spent months writing a piece for me, and then I decide it’s not for me. It’s quite hard in that way.

Nonetheless, it’s always an adventure to discover new music. It’s particularly fun to be in a new opera where nobody knows the music, not even the composer, because he’s only heard it in his head. But, as there is already so much beautiful music that has been written that I can discover for myself, I’ve chosen to go down that road instead.

I never wanted to be famous, or standing on the Metropolitan Opera stage, or anything like that. Things have come to me, and that’s wonderful.

Who initiated the “Brahms and Beyond” project?

I don’t know. I think it was the fact that different concert houses — particularly [the principal one in] Los Angeles and Carnegie Hall — discussed it with Manny Ax, and they together decided that we really must give an opportunity to modern composers to write something. The discussion was more about which composers. In America, I think you’re very, very good at encouraging new music to be written and performed. Technically, it didn’t come from me, even though I do think that it’s a very exciting idea.

Has Nico worked with you to tailor the piece to your voice?

Yeah, I definitely feel that he has checked out my voice. We were also in touch a little bit by mail, and he asked recently that if I was working on the piece, could I record it and send it to him? I did, and he had some things to say.

It’s been very nice communicating with him. I like Nico. He seems a great guy. He has lots of energy, and is very productive.

We were discussing what kind of text. Did I have anything in mind? I didn’t, really, but I told him some poets and what kinds of literature I enjoy, and he had some ideas. The thing he sent me first was very, very long, and it was very hard. If you look at an opera libretto or a lied, usually the texts are very short. Even an opera libretto is not that long.

It’s always an adventure to discover new music. It’s particularly fun to be in a new opera where nobody knows the music, not even the composer.

I asked if he could look for something a little shorter, or use just part of it. He understood that and agreed.

The music has two texts, but it goes on so you don’t sort of notice the shift. The first one is by C.P. Cavafy [1863–1933], a Greek poet who lived in Egypt, and the second is by Joyce Carol Oates. That idea came from me. I’m a great fan of hers, and she has written poetry as well as books.

The piece is juxtaposed with Brahms lieder and folk songs. Do they all work together in some way?

Well, I don’t think Nico necessarily thought his piece had to fit right in with the Brahms. He has his style, and he knows what will work for him. That’s how he wrote it. There’s not a lot of common ground between the two composers, but that doesn’t really matter. I often put together programs that go in all kinds of directions, from Sibelius to Schubert to Brad Mehldau, so that is not important to me.

The piece is like [those that] a lot of American composers have been writing for the last 20, 30, or 40 years. There’s a lot of activity in the piano, with a lot of interesting things happening rhythmically and rather beautiful harmonies. The song melody is narrated, more than anything.

What are you singing of Brahms?

I’m singing songs I’ve sung for a long time that I know quite well, and some new ones, which were not so hard to find. I decided to make the first group folk texts — some you find in his volumes of folk songs, and some in others. Brahms can be very “Brahmsy,” but in the folk songs, you can hear the more-genuine folk flavor with his accompaniments. I tried to vary the sound of the songs.

We finish with the Zigeunelieder (Gypsy songs), which have a lot of energy. They’re fun to sing, and hopefully fun to listen to. There was discussion about what to end with, but finally we decided to go with them.

Before the groups of songs, Manny is playing a lot of beautiful solo pieces for piano, so we get a lot of variety. A lot of the audience will be there who love his hand, and I’m a firm believer in varying the program so you just don’t get the singer standing there singing song after song after song. So it’s a bit like a salon — drawing-room music!

I often put together programs that go in all kinds of directions, from Sibelius to Schubert to Brad Mehldau.

One of the most famous Brahms songs that I’ll sing is “Von ewiger Liebe” (Of eternal love). I also perform “Auf dem Kirchhofe” (In the churchyard), which is dramatic, and “Sommerabend” (Summer ending), which is very lyrical and one of his more sensuous pieces. At the beginning are “Da unten im Tale” (Down in the valley) and “Erlaube mir, feins Mädchen” (Allow me, fine maiden). After the intermission we have one of the most beautiful songs that he has written, a combined love song/lullaby, “Ruhe, Süßliebchen” (Rest, my love) from Die schöne Magelone (The beautiful Magelone).

Have any older singers served as models when you’ve developed your approach to Brahms? Have you listened to people such as Lotte Lehmann or Kathleen Ferrier, who sang Brahms with Bruno Walter at the piano?

When I was young, I heard [Dietrich] Fischer-Dieskau a lot, particularly singing Die schöne Magelone. But the singer I always listen to, if she has sung the repertoire I’m performing, is Christa Ludwig, because she’s such a wonderful singer with a wonderful technique. She’s very musical and yet very intelligent; she’s absolutely conscious of what she’s doing the whole time in a way that I admire very, very much.

Looking forward, what are your plans for the next few years?

April and May I spend in Madrid singing Nicklausse in [The Tales of] Hoffmann with a wonderful Swiss director called Christoph Marthaler, and I’m doing a lot of concerts, a master class in Salzburg, and all kinds of things.