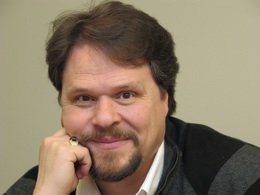 In 2008, baritone Mark Delavan sang the first Wotan of his career in San Francisco Opera’s production of Wagner’s Das Rheingold. Now, at age 51, the Merola graduate returns to our fair city for his second Wotan, that of Die Walküre. This time, he carries with him the experience of having recently sung the role in Berlin.

The Texas-born son of singers and voice teachers, Delavan was raised in Arizona from the age of 8. After the family moved, his father, who always had a university job, a church job, and voice students on the side, also became music director of the Phoenix Symphony Chorale. From his dad he learned about dynamic contrasts and vocal empathy. To this day, he can sense what fellow singers are doing in their throats, and can imitate their techniques and accents as he sees fit.

If there’s one thing that Delavan has besides a fine voice and deep commitment, it’s energy. In a 90-minute, in-person interview — he will not do phone — he gestured, thundered, and roared like a cross between a god and a die-hard Raiders fan. If it takes getting down and dirty to play a god, Mark Delavan is tailor-made for the part.

Tell me about Wotan.

First of all, this is a five-year assumption. I can only list the changes that have taken place as a result of taking on this project. One is that I have a very different work ethic. I was told by people that I trust, “You must learn this for a year. You must get this in your bones.”

If I just took that work process, and set that aside, that’s enough. That was a payoff unto itself. In other words, if you really, really want something bad enough, you will work your tail end off for it.

If that were all, that would be enough. If I just worked really hard, and all I got out of it was the ability to work really hard on something and achieve what I got enough, that would be a reward unto itself. But it’s not enough.

What, then, are you ultimately trying to achieve?

What opera is always trying to achieve is the perfect blend of music and drama.

When you started coaching, did you empathize totally with Wotan?

I ask because, yesterday, I listened to Clemens Krauss conducting the Wotan of Hans Hotter, live, in 1953.

Oh my God, that must have been a revelation. The things Hotter does! I have a later recording from Bayreuth where the voice isn’t pretty. But there’s one place where Brünnhilde protests that Wotan gave Siegmund the sword to use [to kill Hunding]. Then Wotan says, “And that sword I smashed to pieces,” with this incredible scream as he throws something on the ground, and you feel the collective gasp of the audience, and then you hear these quiet little notes, and he says ... what does he say first? [looking through the score]

You’d better remember this! You just did it in Berlin.

I just did it. The translation is, “Do not try, O maid, to get me to change the decision I just made. Your fate awaits you. It’s not my choice. You’ve made your decision.” But you hear in his voice sounds that are so close to weeping. And I’m sitting there with these earbuds in my ears, and I’m swearing, “Oh my God, oh my God ...”

Yeah. His performance is what great opera’s about.

It’s what opera is about.

People go to opera and they’re bored, because all they hear are people with pretty voices singing the notes.

Yes. I now have a new commitment to the character, and telling the truth about the character. I’ve dropped some characters from my repertoire because I just can’t do them. I want to say, “Like, Dude, wake up! She’s not yours. Let it go!” I’ve been that obsessed in my past, but to go to such crazy lengths to get a person, I can’t do it anymore.

But, back to Wotan, he may say to Brünnhilde, “Don’t try to get me to change my mind,” but in fact, he does change it a bit.

He does. At one point, he says, “So you’re enjoying love, are you, sweetie pie? Great isn’t it, great isn’t it, while me, the god, has to sit here and mix my own gnawing gall.”

She keeps saying, “I am you,” as though she is the mirror of who he is.

Yes, she basically says, “I’m your soul.” Her argument is that she did what he wanted.

But she responds, “That’s beside the point. Am I or am I not your soul? I’m the voice of your soul.”

I am your eyes. I am your inner voice. Faithful to you inwardly, I disobeyed your command.

He sings, “You broke the law.”

“Yes, but I did what you wanted me to.” And here, this kills me. [As the meter of their respective parts changes] the roles switch, and she realizes that she has to be the sacrifice. Somebody has to pay for this, and it’s her.

What is it like getting all of this into your voice?

It is profoundly — I don’t have one word — it’s profoundly spiritual. You’d better be spiritually fit if you’re going to do Wotan, because it will either turn you into a cold-hearted piece of wood, or it will wrack you.

There are only two other roles I’ve done that are that emotionally taxing. One is Boccanegra, the other Rigoletto. Both are fathers of girls. When it all comes down to it, that final scene is a father saying good-bye to his daughter forever. It’s a farewell that very few of us have any concept of.

That last scene has brought me to tears maybe 20 times. How can he do this?

So “spiritually fit” means what, in this context?

I will plead the Fifth, and prefer to stay enigmatic. But let me put it this way: If you have a spiritual tradition, and you take on the role of Wotan, you’d better double up your prayer life and pray for other people you don’t like, because the challenge of the role is so encompassing.

So you have to keep your center. You have to be in the center of Mark at the same time that you’re totally consumed with the character of Wotan, because if you just go with the drama, your voice may not last.

Voice? My mind may not last! Because if you think about that day, he’s lost his marriage and his two children. You don’t say to a man, “Honey, I need you to kill your stepson, but it’s going to be OK between us, right?” It’s not.

I have four sons. When I hold the body of Siegmund in my arms, I put a real face on it. I lose my marriage, kill my own son, and then condemn my daughter to sleep for 30 years and wake up in the arms of some bozo.