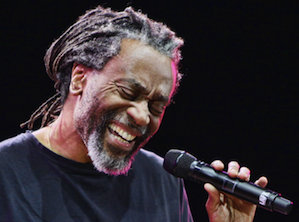 “People are always trying to categorize you, so why put on some kind of campaign to get people to think of you as one thing?” Bobby McFerrin asked during an interview in 1990, my second with him. “I think if I did that, and everyone started to think of me in one way, I’d regret it.” Earlier that year, he’d made a “midlife decision” to celebrate his 40th birthday by conducting the San Francisco Symphony. This continued the defiance of categorization that the singer/conductor had followed since moving to San Francisco with his wife, Debbie; two dogs; and a hundred bucks, in 1979. He’d evolved from small-club piano gigs to a cappella vocalizations in recordings and live performances, with material that ranged from jazz to pop to transcendent original compositions and the infectious reggae-ish hit Don’t Worry, Be Happy, all the while expanding his vocal instrument over several octaves.

After departing the Bay Area, McFerrin functioned as creative chair of the Saint Paul Chamber Symphony, and guest conducted the orchestras of New York, Chicago, Cleveland, Philadelphia, Los Angeles, London, Vienna, and Israel. The singer’s educational mission extended from audience participation exercises to school appearances, and to the formation of a Bay Area–based a cappella vocal choir that he named Voicestra. His current tour, reaching the Mondavi Center at UC Davis on April 5 (his March 30 gig at Davies Symphony Hall in San Francisco has been rescheduled to Sept. 23, as a result of the musicians’ strike, now resolved), augurs the May 14 release of his latest Sony Masterworks album, called spirityouall. The title refers, in part, to the legacy of his father, the late Robert McFerrin Sr., an operatic baritone who was the first African-American signed by the Metropolitan Opera and who provided the singing voice of Sidney Poitier in the filmed version of Porgy and Bess and recorded an LP of spirituals, Deep River, released by Riverside Records in 1958. McFerrin spoke with SFCV from a stop in Utah.

I’m thinking back to when we were both bringing up kids in Noe Valley here, and you were performing at the Noe Valley Ministry, in the 1990s. Please remind me of your and Debbie’s kids’ names.

Taylor, Jevon, and Madison. They’re adults now, and the oldest is a musician, as is the youngest. The middle child has a very good voice, but he’s into acting.

Your own dad studied classical vocal technique at Chicago Musical College in the 1940s, and with Hall Johnson after he relocated to New York City, where you were born. Your mom, Sara Copper, had also studied voice, at Howard University, and they both later became teachers themselves. Was any of that classical training passed on to you?

Well, maybe somewhere tucked back in my subconscious, there might be some truth to that. As a kid, I would hide under the piano when my father would give vocal lessons, so I probably picked up some of the things he talked about. He was all about the lyrical content and what the song was saying, so if you needed extra time within a bar to say something meaningfully, then he was all for that. He would stretch a note out, broaden the meter in some kind of way, more than other singers would.

Wouldn’t that require more than just will and imagination? You’d also have to have a certain amount of power and technique, which I can certainly hear in his YouTube videos.

Your technique has to be so fundamentally sound that you don’t even think about it anymore. And that takes years and years of singing. Not only singing to yourself, in a practice room, but singing in a hall under performance conditions, which is very, very different. You have to be powerful in that sense, that you can fill the room.

You’ve said, though, that there’s a consistency between singing in a hall and singing in the shower.

You know, you make every space, wherever you are, your singing space.

So you never had any formal classical training?

I did, on piano. I started in New York City, when I was about 6, and I thought that was my instrument, until I hit college.

Your first gigs in San Francisco were on piano, after you moved here. Did the piano inform the vocals?

I’ve always tried to play within the bar lines, to see what I can do with it, and I got a lot of ideas from piano players, particularly [jazz pianist] Keith Jarrett — the way he would stretch a line out, play around the rhythm, play against the rhythm. I just found that fascinating. Now when I write, I write on piano, or on a keyboard.

How much classical voice have you performed in the past few years?

One of the pieces in my repertoire is the Vivaldi Double Cello Concerto. I don’t do much, though. When I’m working with an orchestra, I’m usually conducting.

Your technique has to be so fundamentally sound that you don’t even think about it anymore.

Have you gone to the cello repertoire because it matches your natural vocal range?

In those YouTube samples, your father doesn’t feel the need to stay in “safe” baritone territory. Did that influence you?

It might have. He had a pretty wide range for a baritone; he could sing tenor parts, too.

How soon did you start stretching your own range?

When I decided I wanted to do solo voice concerts — that would have been ’77 to ’83 — I worked every day on my technique, for a good two hours every day.

Do you hear your dad at all in your own voice?

How was he different?

Just in terms of his power, and the sound, he had a very warm sound. I don’t sound anything like my dad at all.

Your dad contributed a track to your Medicine Music album in 1996. Did the two of you get to perform together?

Not that often. I think the first time was in Berlin, maybe in the early ’80s. We did the Bach Ave Maria. It was great.

You once said that when you direct a choir, you go for your dad’s sound.

Your new album has a batch of songs about spiritual matters, and that’s another connection to Robert Sr.

One of my focuses is trying to get people to not perform, but just sing … in their “regular blue-jeans” voice.

Well, I grew up in a family of faith. Both my parents were Christians, I was an acolyte in church [St. John’s Episcopal Cathedral in Los Angeles], and I was an altar boy and sang in the choir.

In 1990, you told me, “If we were not spiritual beings, we wouldn’t be here,” and that your Voicestra group prayed before every performance. Is the time right, now, for your launching a manifestly spiritual recording?

I think everybody is ready, whether they know it or not. I think people are hungering for enlightenment. They’re certainly looking for happiness, but in all the wrong places, many times. [Laughs] I first thought of this [spiritual theme] at least 30 years ago, and tried to record it several times with other musicians, and it just never got past the demo stage. This just seemed to be the right time, particularly coming off VOCABuLarieS [his 2010 album on EmArcy, involving ecstatically multitracked vocals]. I wanted to do something with a band, and a lot simpler. [The new album’s musicians include San Francisco native Larry Grenadier on bass, and Portland’s Esperanza Spalding on bass and vocals.]

When you're teaching do you urge the voice as a vehicle of the spirit?

As a matter of fact, I have a workshop today, in a couple of hours, and that question will probably come up. One of my focuses is trying to get people to not perform, but just sing — the same way they do when they’re just hanging out waiting for the bus, in their regular “blue-jeans” voice. Don’t make a big deal out of it.

And that makes them sound different?

It surely will. The worst thing a singer can do is stress out about things.