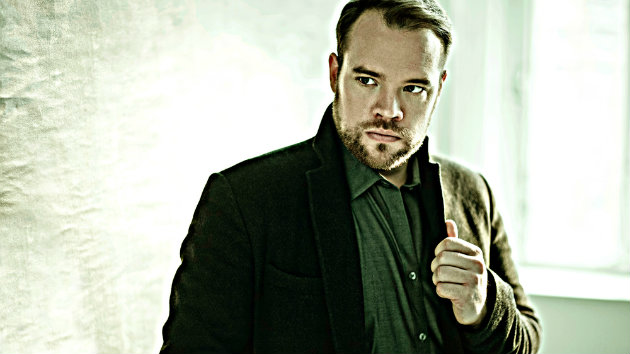 Brian Mulligan has been so much involved with murder and mayhem at the War Memorial Opera House, and will continue to be, that you might almost have expected the path to our appointment in the press room to have been marked with fake blood. The busy baritone is finishing the last of his weeks there in the title role of Sweeney Todd, and a week later he’ll be doing fearsome filial duty in the San Francisco Opera’s next production, Lucia di Lammermoor.

In December, he’ll portray another tragic brother, Roderick, in S.F. Opera’s double-header of Usher House, by Gordon Getty, and La Chute de la Maison Usher, by Claude Debussy. Mulligan won’t escape the horror by relocating to the Minnesota Opera next Spring, where he’ll premiere the unhinged role of Jack Torrance in Paul Moravec and Mark Campbell’s The Shining. But Mulligan, as evidenced in the Sunday matinee performance of Sweeney, which my son Nicholas and I witnessed, finds the accessible human facets even in his most tortured characters, much as he has in other sorts of parts he’s sung here, across the country, and in Ireland and Europe, including the title role in Nixon in China and Marcello in La Bohème.

The singer has also appeared with several major orchestras in concert, and on the Deutsche Grammophon DVD of Mahler’s Symphony No. 8, featuring Gustavo Dudamel with the Los Angeles Philharmonic and the Simón Bolívar Orchestra. But Sweeney was Mulligan’s first professional experience with musical theater, and the starting point for our chat.

Does Sondheim ask things of you which opera hasn’t?

Certainly, the spoken dialogue is the biggest difference. It’s not like you and I just talking here, it requires a lot of thought. And this is a very physical production, I love that, though I’ve been physical in other productions; that’s something I gravitate towards.

Well, you’re in good shape, with a wonderfully deep and resonant voice, even just talking here. But what about the music in Sweeney?

Everybody thinks that musical theater would be easier than opera. [Chuckles] But I’m telling you, Sondheim is hard! Right at the very beginning of the show, the first “The Barber and His Wife”, the meter changes every single measure --- 3/4, 4/4, 2/4, 3/4, 5/8, it's very difficult, comparable, say, to John Adams' writing in Nixon In China. But once I learned it, I realized how brilliantly it was set to the cadence of the English language. "The screaming, oh my god, that requires so much breath, so much technique, to do it healthily. I’m amazed at how Broadway singers can do this, eight times a week!"

Seems like it also often matches Sondheim’s whip-smart way with words. Those changes draw people into the lyrics.

The screaming, oh my god, that requires so much breath, so much technique, to do it healthily. I’m amazed at how Broadway singers can do this, eight times a week! But I want to be singing for a long time.

And we’re expecting you to!

For another 30 years! And this is my voice, and I’m very, very careful with him, very gentle with him, I respect him very much.

How have you protected him in Sweeney?

With the screams, the technique I invented, on my own, was to kind of pick a pitch to scream on. And at the end, I could add in a little vocal fry or something. It’s all based on air.

Was there special coaching for singing musical theater?

Essentially, I sing this role the same way I sing every role, and I sing a very wide repertoire, so it constantly forces me to approach every single role that I do from square one. And it all comes back to the technique I learned from my teacher, Steve Smith, at Juilliard. He published a book, called The Naked Voice: A Wholistic Approach to Singing [Oxford University Press]. It’s essentially how everything is buoyed by air, and how every sound that you make comes from inspiration [literally, the drawing in of breath]. And he’s very much about removing any tension from your articulators, like your jaw or your tongue or your mouth.

You’ve said you favor roles that are physical.

What’s helped my vocalism and my artistry is to be physical on stage, not stand and sing. It gets me out of my head, relaxes my body, and maybe improves my breath mechanism.

What about the psychology of roles? Are you more a Sweeney, or more a Marcello?

I’m more emotional than Marcello, and more of a thinker. Sweeney is a thinker, a planner. 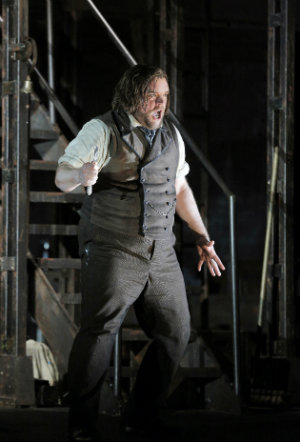 And what about your Enrico, in Lucia? Is he closer to Sweeney?

I’ll have the [S.F. Opera’s] Wig and Makeup Department and the costume designer really differentiate my look from Sweeney, because the two roles are so close in time.

You’ve said you’ve sung Enrico more than any other role. What does he mean to you?

This production will be with Maestro [Nicola] Luisotti, and with Michael Cavanagh, who directed Nixon [with S.F. Opera, in 2012]. It’s funny, because the way I approach Enrico is, he’s Lucia’s brother, and there’s kind of a mental illness in the family.

That sounds a bit like your Roderick, in the upcoming Usher operas.

Yes. [Chuckles] And a little Sweeney-like. Lucia is pushed to the edge, and murders her husband. With Enrico, there’s only so far he’ll go. You think, through the night, that he’s the crazy one, but then it turns out that his sister is the real lunatic.

And there are musical rewards for you in that family tale.

Oh, that music is so atmospheric and gorgeous! I never get tired of Enrico! It’s beautiful bel canto singing, and there’s room for a lot of classic villainous baritone singing and machismo.

I learned the music in May and June. I worked on a lot of nuance very early, because the Debussy requires it.

Have you met the living composer?

Not yet. But I’ve done research on the story, there’s so much room for interpretation: what’s the matter with Roderick, how [Roderick’s sister] Madeline died, and the nature of the Usher house.

I’ve heard about your zeal for research. Does it work the same for fictional and non-fictional subjects?

Where was your childhood bed?

Upstate New York. Anyway, I visited Nixon’s childhood home and his presidential library, in Yorba Linda [near L.A.], to feel a little more of who this person was. Then I felt I could increase the similarities by me experiencing going to China, just as he experienced it, seeing this new way of life. And I would have all of these things to draw from, in my performance.

China was where the train was going.

And how did you research Roderick Usher?

It’s in going to the text, the Poe. [Getty’s and Debussy’s operas are both based on Edgar Allan Poe’s 1839 short story, "The Fall of the House of Usher."] But it’s also going to the texts of the librettos [by the two composers].

The Debussy is so rich and textured. If you think of the classic horror film, with a haunted house and cobwebs and a mass of scary things, the Debussy is like that, murky and unsettling, because you don’t understand what’s going on. The Getty is more like [the 1980 Stanley Kubrick film] The Shining, where it’s the starkness which is so unsettling. There’s this transparency, which is terrifying, and the cleanness of the score, juxtaposed with the murkiness of the Debussy. It’s really fascinating, two different takes on fear and terror. And I’ll be working with the Wig and Makeup and Costume Departments again, because I want both Rodericks to look different, so that the focus is more on the pieces than it is on me.

It’ll be unique for both you and the audiences.

It’s gonna be great fun. I don’t know when I’d ever have this opportunity again.

Talking about The Shining, that’ll be taking operatic form for you in the Spring.

I’ve already learned the whole role, and workshopped it.

And it’ll have you back in a “dreadful” role.

I’m trying not to take it personally, my friends say I’m being typecast. The source material for the opera is the more the book [by Stephen King] than the film [by Stanley Kubrick]. But I’m gonna do what I can do to bring a couple of winks from the Jack Nicholson film portrayal [of Jack Torrance] to my performance.

Do you seek that same sort of tone when you’re watching TV, in whatever little free time you have?

Well, I have to spend quite a bit of time shutting up and being quiet. I can’t listen to music, because it’s almost impossible for me to not want to sing along, though I like piano jazz, like Oscar Peterson and Bill Evans. But with TV, I can be entertaining myself, unplugging my brain, and being quiet.

I’ve heard you share my affection for [HBO’s] True Detective.

The first season to me was just transcendent. I always think about the season closer, when Matthew McConaughey was looking up and could see the universe opening. I’m a humongous David Lynch fan, my favorite TV show of all time was Twin Peaks, and Lynch famously said, “Dreams don’t make sense, life doesn’t make sense, so why would you expect art to make sense?” I like having those kinds of moments in art where there are inexplicable things. And I expect there probably will be a lot of that in the Usher operas, because the things Roderick says are just insane!