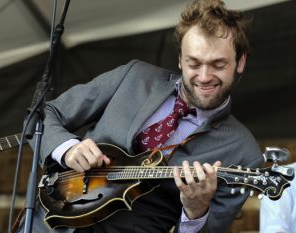 In more than one sense, 32-year-old mandolinist Chris Thile (pronounced “Tee-lee”) has been able to pick among paths to musical renown, one of which will position him this weekend in all-star company at Sonoma’s Green Music Center and Berkeley’s Greek Theater. Success started early with the group Nickel Creek, whose debut recording in 1994 went platinum and won the San Diego County natives a Grammy for Best Contemporary Folk Album. After 13 years and several other successful group and solo recordings and tours, Thile became part of the Punch Brothers, another sort of contemporary take on bluegrass instrumentation, which debuted Thile’s The Blind Leaving the Blind, a 40-minute suite in four movements, at Carnegie Hall.

The Punch Brothers continue to tour and record, but Thile has also formed other alliances to explore a variety of musical genres, among them Baroque and classical, with collaborators including banjoist Bela Fleck and fellow mandolinist Mike Marshall. Thile’s 2009 mandolin concerto Ad astra per alas porci was commissioned by a consortium of orchestras. A couple of years later he joined cellist Yo-Yo Ma, bassist Edgar Meyer, and fiddler Stuart Duncan to record The Goat Rodeo Sessions for Sony Masterworks, and it’s that group and material that will be featured this Friday and Saturday, with vocalist Aoife O’Donovan guesting. Although the album was awarded a Grammy for Best Folk Album this year, its approach is more a suave evocation of the players’ own sensibilities and virtuosity than a tribute to traditional forms. (You might dub it “salongrass.”) After auditing Thile’s latest disc — his solo take on Bach: Sonatas and Partitas, Vol. I (Nonesuch) — SFCV got to chat with him between sessions in the practice room.

The Goat Rodeo has corralled players from a variety of backgrounds. What brings you together?

The common desire for increased understanding of music as an all-encompassing pursuit. I think all of us fervently believe that music need not be divided into camps: classical music here, bluegrass music there, rock music over there, and so on. Great music can come from anywhere; and instances of it, regardless of source, or the aesthetic conventions of the presentation, have more similarities than they do differences. And those similarities are tied up in a skillful wielding of the constructs of music: melody, rhythm, harmony, form, those types of things.

Was your eclecticism born in your family?

I suppose so. I was born in Southern California, which is generally not known for having a streak of traditionalism. So I suppose that rubbed off on me. My parents are fairly omnivorous music listeners. And I was a lot more concerned with whether I perceived something as being good or not, than what category it was in.

Your dad, Scott, is a piano technician. Did he have anything to do with your settling on the mandolin?

He facilitated my seeing the mandolin for the first time, though not intentionally. We went to go see a bluegrass band play at That Pizza Place, in Carlsbad, California.

Was that a family favorite for dining out?

Yes, it was. And my parents love live music, and heard there would be some there. Though I don’t think they anticipated my becoming obsessed with the mandolin as a result.

What did you experience, along with the pizza?

For me, I think it was as much the person playing the mandolin as it was the instrument itself. That was John Moore, who would eventually become my teacher, a very good player, also a very charismatic fellow. And I think, for a little kid, you’re just drawn to people like that, the leaders and people who shine brightly. I wanted to play the mandolin because he played it. But also: I think the sound appealed to me, the size of the instrument, it’s very small, and so was I. It’s sometimes by chance that you find these voices. And then you decide at a certain age that luck was either kind or cruel. And by the time I was conscious of having made the decision, I felt it was a good one.

This was the mid-1980s. Was it a good time to be coming into that kind of music? Did you catch a wave of revival of bluegrass or Americana?

I’ve seen a couple of waves of acoustic revival. They come in when people get a little tired of spit-shined electronic music, and it subsides when people get tired of grittier acoustic music. But I’ve never really much cared about that sort of analysis. That’s for people who work for record labels to care about.

Your first group, Nickel Creek, came out of a couple of families, and played some of its first gigs at That Pizza Place before going on to fame and fortune.

That was my family — my dad played bass — and the Watkins, two siblings, Sean and Sara.

Music need not be divided into camps: classical music here, bluegrass music there, rock music over there, and so on.

Were the family roots important?

I don’t know if we were conscious of it.

Well, musicians take on extended family in the process of making music.

Exactly. I feel like my fellow Goat Rodeo participants are family, as well.

How soon did you start applying your mandolin to classical repertoire?

I guess I was about 10 years into my development as a musician, around age 15 or 16 (I was 5 when I started playing mandolin). I came into contact with Glenn Gould’s second recording of the “Goldberg Variations,” and I felt like his approach to that music, rhythmically — well, I just felt it was extraordinary, and it elicited a very deep physical response from me in a way that I had not hitherto associated with classical music. And he was someone who deeply understood the music of Bach. Even if he could make choices that would be fairly confusing, he could also make choices that were extremely illuminating. And it proved to be so for me, and it was then that I decided I at least wanted to have a meaningful musical interaction with the music of Bach. And that that should not be separated from the other music I was interested in.

But Bach didn’t compose for mandolin.

No, he never did. But Vivaldi did, and Bach was certainly keenly aware of Vivaldi’s activity. I believe the “Brandenburgs” were a response, of sorts, to hearing some of Vivaldi’s concerti. I’m assuming Bach was aware of the mandolin. But history does not shine brightly on the mandolin. And I imagine, with the instruments that were available during Bach’s time, there wasn’t much to recommend it, I’m afraid. The Baroque mandolins I’ve played were slight in sound and appeal.

So your modern mandolin is better suited to the classics?

It was then after Glenn Gould’s recording that I decided I at least wanted to have a meaningful musical interaction with the music of Bach.

Well, I’ll only say that the instrument could be better than it is, but it’s better than it was. It’s more pleasing, a more complex tone than it used to have. I think the F-5 style mandolin [originated by the Gibson company, and copied by others] has more “sustain,” it’s louder, it’s more precise, but it’s also more complicated. Which is good.

Hilary and I have played together, and that was delightful.

Will there be a Bach Volume II? On Michael Lawrence's documentary Bach & Friends, you said that the Bach you've included in your concerts "is something that people come to hear now, and these are not classical music fans."

Oh, yes, I’ll finish that recording project up, the remainder of the six sonatas and partitas, hopefully within one or two years.

What have you been doing with the MacArthur Fellowship you were given last year?

The Fellowship was out of the clear blue sky, and was one of the most pleasant surprises I’ve ever experienced. The best part of it is the feeling of responsibility that comes with it. Even though the Fellowship is no-strings-attached, I feel a lot of responsibility to be worthy, and to work hard and work well. It allows me some freedom as far as the projects I feel compelled to take on, because maybe money can be less of a factor than it was previously.