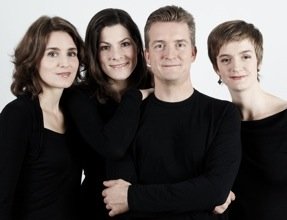 Seventeen years into their founding, the members of the Tetzlaff Quartet rarely find time to perform together. After a glance at the schedule of the quartet’s founder, violinist Christian Tetzlaff, the reason becomes clear. In the months preceding the quartet’s April 16 performance in Herbst Theatre, sponsored by San Francisco Performances, Christian Tetzlaff will perform orchestral, small chamber, and solo concerts in Berlin, Salzburg, Miami, Strasbourg, St. Petersburg, Lübeck, Zürich, Boston, New York’s Carnegie Hall (one of three Carnegie appearances this year), London, Paris, and several other European cities.

The other quartet members — violinist Elisabeth Kufferath, a former orchestral concertmaster who mixes a violin professorship with frequent guest appearances; violist Hanna Weinmeister, first concertmaster of the Zurich Opera Orchestra and frequent guest presenter; and cellist Tanja Tetzlaff (Christian’s sister), another frequent soloist and collaborator — are all multiple prize winners with equally intense schedules. Everyone is so busy that it took 14 years for the quartet to issue its first solo recording.

In this phone interview, conducted while Tetzlaff was in Miami for a series of performances, we discussed Schoenberg’s quartet in the context of the program, as well as the process of artistic expression and the realities of life on the road.

It’s very simple. If you are a violinist and you have the opportunity to play, let’s say, Schubert’s G Major String Quartet or the C Major Quintet, or Berg’s Lyric Suite and Dvořák quartets — all this incredible, wonderful, beautiful, touching music — it would be stupid not to do it. Of course, we also have nice violin concerti. But that kind of emotional intensity we may encounter only in Brahms and Berg and Beethoven violin concertos. So chamber music is something I crave and really need to do.

I know that your need is great. I also have recordings from the annual festival where you perform chamber music with Lars Vogt and other groups of people.

Yes. We have each year one week where we quickly rehearse stuff and put everything live on CD. It’s a very different concept from how usually CDs are made or chamber music is done, because we have rehearsals, a dress [rehearsal], and then we have a CD. So it’s from hand to mouth [sic].

The criticism often leveled at ensembles that consist of stars who come together infrequently, or only once, is that the artists never merge to form a musical unity.

In Heimbach, we have a complete Woodstock feeling. It’s like audience of Woodstock. There are no soloists; the people Lars invites are fantastic musicians, but they are all really just musicians.

We don’t get paid, it’s noncommercial, and it’s a whole week of eight concerts. We rehearse every day for seven hours and we play at night. Every night we have 550 people. The festival is announced in February on the Internet, and all concerts sell out in 15 minutes.

The only way you can put together a string quartet in a quick time is that you only listen to the other players. You try to merge with them. Only a few times in the last few years was there a person with an ego, but they were not reinvited. It’s a completely different feel there. The group we have there now makes things possible that I would have thought absolutely ridiculous to try 10 years ago.

I also play in my quartet. We don’t have a big repertoire, but we’ve lived with the pieces we play for a long time. So there are advantages to getting deeply into something. It’s not either/or. There are good sides to both ways of studying.

I must admit that it was a challenge to listen to your recording of the Schoenberg string quartet. There are so many ideas coming so fast, that as soon as I’d get drawn into one idea, I’d discover we were already off to another.

Ja. That is for the first 20 minutes, because he is collecting all those ideas. Then he puts it all together like a puzzle, and resolves it as a finished picture. For me, that’s the feeling. But I’ve been living with the piece for a long time. We first played it 17 years ago.

It’s a long piece. How do audiences react? Are they puzzled? Do they go with it?

Absolutely. They love it! I think it’s because there’s so much action. I think what you find disconcerting on a CD is helped a lot by living at the same time with the musicians onstage. Especially because it’s in two big parts with this big break in the middle, after the “big catastrophe.” I think things like that are really difficult on CD.

As audiences are decreasing for classical music, and people approach music as a commodity that can play in the background while you’re shopping or doing other things, the extra dimension of live performance is lost. What does it convey to you?

I think only in a live performance do we get this kind of religious sense of belonging together, where everybody in the audience is experiencing something similar at the same time. A recording doesn’t come close to the intensity of watching enthusiastic players doing their best onstage. You may be involved by yourself while listening to a recording, but this kind of being moved into ecstasy happens in the concert.

You sounded so pessimistic. I think the audiences for this kind of intense, true experience were never huge. Classical music, in general, was always something like way below 5 percent throughout the centuries. Still, we have dedicated audiences everywhere. Sometimes, with some organizations and promoters, it’s better; sometimes it’s going down the hill because too much is about commercialization and superstars. But in general I think even if we are only a zoo or a museum, we always have people who want to get close to their hearts and their emotions, and I find this shall be done or works better in a concert rather than at home.

You perform in many different venues. Herbst Theatre in San Francisco is a very [acoustically] “dry” hall. Do you find yourself adjusting your sound to your venue in order to convey what you want to convey?

It’s something that happens just by itself. And it’s about more than adjusting. If a theater is really dry, you will hear a lot of beautiful nuances, as if in a living room. You gain in intimacy what you lose in glamour and big sound and beauty. So dry halls I really like, because every sigh and every slight change of vibrato really registers.

In another hall, you rejoice in the reverberation and the beautiful orchestral sound. These are all very different concert experiences. It cannot all be adjusted, and it doesn’t have to be adjusted.

You are the first artist I’ve spoken to who has framed a dry and a dead hall in such a positive light. I always miss the richness of sound in a dry hall.

But the detail can be much more touching, especially if you hear the vulnerability of the players. If they want to play expressively and softly, you will hear all the detail that goes with that. There may be a general danger that so many people are aiming for beauty, and beauty is often the enemy of expression.

Do you sometimes sacrifice beauty of tone for expression?

All the time. In many pieces there are some gloriously beautiful moments, but beauty instead of expression is ridiculous, I find. We really must be actors, and we have so many bitter and not-beautiful and wild moments in our pieces. Beauty is one side of it; truth is what, in the long run, will give an image of beauty for a whole piece.

For example, in Schubert’s Piano Trios or String Quartets, there are pages marked in pianissimo, with some accents. If you play those melodies — and they are mostly beautiful melodies — with a good sound, you will say something completely wrong just for the sake of being liked for the sound. Schubert is saying there is some beauty out there, but we cannot reach it. That’s why it is undermarked. That’s why you have to play pianissimo, soto voce, not speaking freely. Then you gain a beauty that is very strong because of the musical context, not because you played beautifully.

That’s a good one. I think it works wonderfully as an arch. The Mendelssohn and Schoenberg, in a way, are really related, both by form and by content.

Schoenberg wrote that his string quartet was an account of his emotional life in connection with women at that time. It has some very personal background, and is a story-telling quartet. The Mendelssohn is actually about this song he wrote about an unfulfilled love relation. He also writes in an arch form, so that the beginning comes back at the end. Parts of the first movement come back in the last movement. That’s a formal argument and not so important.

The Haydn is an absolutely beautiful and crazy piece, so we had to put it on the tour. I don’t have more reasons.

What do you mean by “crazy”? I tend not to think of Haydn as crazy.

It’s very excessive, dynamically and harmonically, the way it’s written. You can’t talk about music; you have to hear it. The first movement is very expressionist, and is consistently interrupted. After the interruption, one line is pianissimo, and the next entrance is complete fortissimo, and it’s all marked by Haydn. We have lots of chromatic figures, contrasted by a slow movement of great serenity and beauty. It’s one of the really great string quartets.

I’d love you to address the best ways to approach classical music.

This is the job of those telling the story onstage. If he or she doesn’t draw you into the music, then nothing can be done. This is where we really do come in as interpreters. We need to really open your hearts and offer ourselves fully — not as instrumentalists, but as persons. It’s our job to draw you into classical music that speaks intimately about friendship and compassion and terrible things happening and wonderful things happening. We need to draw you into this world, and get closer with your own emotions and heart.

Often this doesn’t happen. It’s not the audience’s fault. A story has to be told in a compelling way. I find there is a lot missing in many concerts, but there is a big chance that the connection will happen again and again.