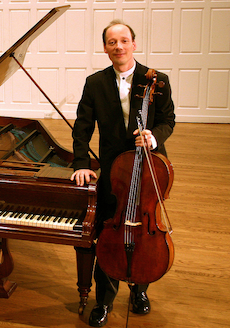 Once praised by SFCV critic Michelle Dulak Thomson for a “magnificently unanimous” performance, the Tokyo String Quartet has, in its 44 years of existence, evolved through various players and expanding repertoire, apparent in the program of Mozart, Brahms, and a brand-new commission by Lera Auerbach, presented in concert at Herbst Theatre this Thursday. The Tokyo was founded in 1969 at the Juilliard School by four recent transplants from Japan, who went on to win several competitions plus a contract with Deutsche Grammophon. After many more awards, more than 30 recordings (the most recent on Harmonia Mundi), and the replacement of some retiring members by non-Japanese players, the Tokyo has finally decided to discontinue one of the world’s best-loved chamber ensembles. In the process of a farewell tour, cellist Clive Greensmith, two years older than the Tokyo itself and a former faculty member at the San Francisco Conservatory, spoke with SFCV from Canada about his treasured time with the Quartet, and what lies ahead.

I understand you’ll be presenting a different program in San Francisco from what the Quartet is playing up there in Calgary.

We’ll be playing the Mozart Hoffmeister, K. 499, and then a new piece we commissioned this year. It’s called Farewell, by Lera Auerbach, a contemporary composer we’ve worked with quite a bit. Then comes Brahms’ Quartet No. 1, in C Minor.

Is the title of that Auerbach piece auspicious?

Yes. We’d already talked to the [commissioning] 92nd Street Y and the promoter in Madrid, and when Lena heard we were retiring, she responded with an ambitious piece to tell the story of the life of a string quartet, which is quite a bit to ask in terms of the demands she places on performers and listeners. It starts with a strong declamatory opening, with the first-violin, in some senses, pitted against the three others. Then other relationships are explored, and rather than smoothing over and creating a homogenous sound, there’s more a sense of disparate personalities. I think she was trying to say we have to try to understand each other’s differences and work to find a way through conflict. Along the way, there are these quasi-cadenzalike passages, so she exploits the range of timbre of each instrument. In the end, everything is resolved, and we hit this beautiful, tranquil C Major.

Her portrait sounds interesting, because the Quartet has often been praised for unity of sound and technique.

I’d think it would be an extremely boring Quartet if we had four Clive Greensmiths! I think she found the differences in the group more revealing and interesting — she sat in on our rehearsals and many of our concerts — and it gave her a more fertile cache of ideas to work with, rather than just homogeneity.

I’ve heard that difficulty in finding replacement members is part of what led to the decision to retire the Tokyo.

I have to remind everybody that there is a 20-year age gap between the two halves of the Quartet, and it was entirely reasonable that our violist [founding member Kazuhide Isomura], who was nearing his 66th birthday after 42-plus seasons, had decided that he’d had enough. He’d played the repertoire long enough, had recorded the Beethoven cycle twice, the Bartók twice, and had a lot to be proud of. And our second-violinist [66-year-old Kikuei Ikeda, who joined the Tokyo in 1974], quite understandably, decided not to start all over again with another member change; he’d had to sit next to no less than five first-violinists. I think [45-year-old first violinist] Martin [Beaver, who joined the Tokyo in 2002] felt it was worth trying, but Martin and I had no illusions [but] that a double-member change, especially of the middle voices, would make it hard to find two people who’d gel with the existing members and with each other. In the end, we decided it was a more noble thing to do to say we’ll call it a day and go out together.

There was a very refined sense of the balancing of voices, which meant you had to be very careful what color you wanted to use to support the Quartet in a certain role.

When did that decision come down?

Just over a year ago. It was made easier by the fact that Martin and I had pretty much learned the core standard repertoire of the Quartet and had recorded quite a bit; we’d had some very good years together. And I felt that at my age, it wasn’t too late for me to embrace another kind of lifestyle, and sort of reinvent myself.

Backtracking to when you came on board, I wonder about the “core Japanese social philosophy” that you’ve said you encountered.

I had certain advantages, in that my wife, Chizuko, is from Japan, and had been to the same school [as had the founding members, in Tokyo]. The founder of that Toho School, Mr. [Hideo] Saito, had instilled in the students a massive sense of civic duty, and a strong sense of homogeneity. I think this has been a very great strength of the Quartet. And the group was also very careful about whether members should take on extra work, outside of the group.

You noticed the differences in rehearsal?

I was very taken by the unanimity of bow strokes, and there was a very refined sense of the balancing of voices, which meant you had to be very careful what color you wanted to use to support the Quartet in a certain role. And there was a sense of respect, an objectivism which allowed the music to speak for itself.

You’ve spoken before about the influence on the Quartet of recruiting non-Japanese, English-speaking replacements, starting with first-violinist Peter Oundjian in 1981.

There are honorifics which they’d used for coworkers and bosses, but after Peter came in, it was just “Peter,” and suddenly they were able to tackle things in a more direct way, which is very good. That had to happen; there’s not time to couch things elegantly.

Have either of the older guys spoken with you about the Quartet’s evolution?

Yes, often. I think you could say it went from a period of the young quartet carving out a career against all odds, and then came Peter, when there was an earnest search to find music-making that was more improvisatory and freer in style, more risk-taking. More recently, we’ve tried to balance out those two very important personalities of the group. With the 20-year age gap, I like to think there’s been some rejuvenating.

There’s a huge appetite and confidence among young people to be in a quartet and relish that repertoire, a fearlessness to tackle very difficult pieces.

You have been and will be a teacher, so you’ve also looked at players 20 years your junior. What will they be doing with chamber music?

I hate to generalize, but from my perspective of teaching at Yale and the Manhattan School of Music and while on tour, there’s a huge appetite and confidence among young people to be in a quartet and relish that repertoire, a fearlessness to tackle very difficult pieces. I’m wondering what’s driving it, and I think a lot of it is these wonderful groups who’ve had very important teaching positions. In America, it’s one of the things we can be proudest of, that we have these wonderful residencies.

Have you had a peek at Classical Revolution?

I think it’s absolutely vital that chamber music find its way into all kinds of different venues. You may have to adjust, but you’ll play it with passion and vigor, and try to get people to come and listen.

Do you have any regret about what you haven’t been able to perform with the Tokyo?

I happen to love the Berg Lyric Suite, and we never got to do it. Another piece we only played a little, and I absolutely adore, is the Schoenberg Second Quartet, because it is such a seminal work. I’m very interested in some music that a lot of people might turn up their noses at, like Wolfgang Rihm, and Hans Werner Henze. I would have liked to have played more Hindemith, because I think he wrote wonderfully well for the string quartet and was a great player himself.

There’s something similar in our journey: the highs and lows, the drama, the melancholy, the joy and the rapture, and everything else in between.

There were little gaps here and there with our Quartet; for some reason, they were not all that keen on Dvořák, which is why I’m so happy that our final album was the Dvořák American, and the Smetana Quartet. The recording had taken place in 2006, and it was languishing in the vault. Harmonia Mundi heard we were retiring, and straightaway they said, “This is the time to bring out that disc.” It was very poignant, because Smetana’s From My Life is like the life of the Quartet: an intensely autobiographical work. And there’s something similar to Smetana in our journey: the highs and lows, the drama, the melancholy, the joy and the rapture, and everything else in between. We hadn’t recorded it before, and I think it’s some of our best playing.

Interesting; that’s a good question. The Quartet has given me so much; the process of putting very hard, demanding pieces together has really enabled me to grow as a musician. I have no illusions that I won’t be able to have the same kind of intimacy again in a quartet setting, but I do have some clear projects I’d like to do. One of my favorite pieces is the Brahms Clarinet Trio, and I’m going to be recording that for Harmonia Mundi in November, with Jon Manasse and Jon Nakamatsu. I’m going to be teaching at the Colburn School in Los Angeles, where my colleague Martin will also be coming. I’d like to play a limited amount of solo concerts, because when you play in a string quartet, you’ve very much in a supportive role, and you can lose a little bit of your profile.

Will we hear you up here?

I certainly hope so! I did do a number of recitals when I taught at the [San Francisco] Conservatory [1998–1999], before joining the Quartet. I’ll also be teaching at Meadowmount [School of Music in Upstate New York], and playing a festival at Santa Fe, and I’ll be going to the Japan Cello Congress on my own, and there will be more festivals in the L.A. area.

Well, you’ve been a great exponent for the Quartet, and I appreciate your sharing your feelings.

My pleasure! And I must say I’ve always enjoyed San Francisco Classical Voice. I’ve always thought the writing is great, whether it’s reviews or interviews, and the amount of coverage is massive!

Do please stay up with us.