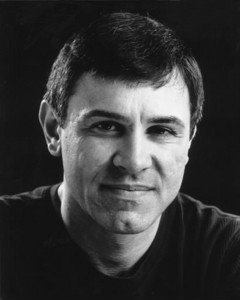 David Conte doesn’t look like a sexagenarian, even though his seventh decade will begin on Dec. 20 and he’ll be publicly celebrating it with a Birthday Concert on Nov. 1 at the San Francisco Conservatory of Music, where he chairs the Composition Department.

Young at heart as he manifestly remains, Conte has credentialed connections to the past. He spent several years as one of the last students of the legendary Nadia Boulanger and then spent scholarly and personal time with Aaron Copland, who’d been a pupil of Boulanger a half-century earlier. Conte secured academic degrees from Bowling Green State University and Cornell University, before joining SFCM in 1985. He’s composed extensively for chorus, as well as for solo voice, opera, chamber ensemble, orchestra, and solo instruments. SFCV shared a lunch with him near his Corona Heights home before he took a sentimental journey to his original hometown of Cleveland.

Are you excited to be going back to Cleveland?
It’s a great musical city! I’ve written a clarinet sonata for the Cleveland Orchestra’s recently retired principal clarinetist, Franklin Cohen. And I was interviewed by clevelandclassical.com, which is modeled on SFCV.

I hear that you were raised Catholic there. Is the church still vital to you?
I attend St. Dominic’s, at Bush & Steiner [in San Francisco], and they commission works regularly. I recommend many of my students, after they graduate from the Conservatory and want to sing in a choir, to join St. Dominic’s, because they also do Renaissance masses, liturgically, almost weekly, in addition to doing a lot of new music.

Has the Catholic Church become more musically hip?
Vatican II had thrown the baby out with the bathwater, with what they thought would make music less formidable and more inclusive. The Church, as Donald Grout said, was the chrysalis within which Western culture was formed: Including Gregorian chant, the Church was responsible for so much great art. Over time, some people are trying to bring great music back, and that’s happened at St. Dominic’s. Along with Grace Cathedral, it’s the best church music in the city. Vaughan Williams said that music should invite listeners into the magic casements of transcendent experience, meaning that great music actually creates a certain atmosphere that allows a person to have a spiritual communion.

How much does a communal spirit affect what you want to write, and how you want to write it? Where do the spiritual and the social come together?
I’m one of the last students of Nadia Boulanger, who was a devout Catholic, but I have to say, I was not so consciously aware of those things at that time. I was 19.

How did you get to her? Or maybe we should go even further back in your musical evolution.
My mom sang with Robert Shaw in the Cleveland Orchestra Chorus, and my dad had been a trumpet player in the Air Force Academy Band. So my earliest memories are watching Robert Shaw rehearse, with James Levine as accompanist, in the rehearsal rooms of Severance Hall. I went to a very good public high school that had outstanding music, and then to Bowling Green, where I started as a piano major and went on to a double major in piano and voice. But I was already composing. In between my sophomore and junior years, I was sent to Paris and to Mme. Boulanger by my music history teacher, Ruth Inglefield, who had studied with Boulanger.

Did you have an inkling of what you were in for?
I’d first heard her name in the film Love Story, when Ryan O’Neal says, “Can’t you marry me?” and Ali MacGraw says, “I’m going to Paris to study with Nadia Boulanger.” I was in junior high. As a music student, I found out that Boulanger was the teacher of Aaron Copland, whom I admired, and Elliott Carter and Philip Glass and Walter Piston and Virgil Thomson and dozens of other composers. So when I got to Paris, I was in a state of awe, but she put me immediately at my ease. And I played for her a recording of my composition for double chorus, Cantate Domino, which had just been published, and I played Bach, the D Major Partita.

What was her reaction? 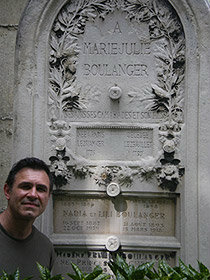 She didn’t say, “You’re a great composer,” she said, “An apple tree produces apples, and you will produce music.” The heart of her teaching was the training of the memory, through the memorizing of piano repertoire. It’s interesting today that many composers do not do that, and I think it’s reflected directly in their music.

Out of all you learned from Mme. Boulanger, would you share another part with us?
She said a very deep thing: that true personality in music is revealed only through deep knowledge of the personality of others. There’s a new book which is astonishing, Teaching Stravinsky: Nadia Boulanger and the Creation of a Modernist Icon [Kimberly A. Francis, Oxford University Press]. Boulanger constantly strove to hold Stravinsky up as a model for the age, and the reason was, she believed great art was represented by what she would call the supreme balance between the intellectual and the intuitive, and she thought Stravinsky represented that most completely, and I agree with her.

And I assume her mode as a teacher has affected yours.
Those students who are interested in that legacy know that they can get that with me. Every summer, in Paris, for the European American Musical Alliance, I teach students from many prestigious musical schools and conservatories, in a program for the European Music Alliance, devoted to the teaching methods of Nadia Boulanger. And I’m recruiting every year from that program [for the SFCM]. I also use Stravinsky and Copland as models, for what they did as students, for my students, a mentor relationship.

Say something about your connection with Copland.
When I went to Cornell, in addition to writing a piece of music for our degree, we had to write a thesis. I decided to write mine on Copland’s Piano Quartet, which was his first 12-tone piece, in 1950. My thesis advisor was William Austin, a brilliant musicologist who had written the Grove Dictionary entry on Copland, and he said, “Let’s send this to Copland!’ I still have Copland’s letter, he said, “I’d be happy to meet with you when you’re in the New York area.” He was 82, he already had Alzheimer’s, but I think he was probably very touched by my thesis. So I decided to go on and write a doctoral dissertation on Inscape, which was his last orchestral piece, in 1967, to reconstruct the way Copland wrote that piece, based on his sketches. I took an apartment at 80th & Columbus, and every Tuesday I took a train to Peekskill, where Copland lived, and I stayed there from Tuesday to Thursday or Friday, every sketch was in the house there.

What is your brand of pedagogy? And how does it fit within your department?
It’s Boulanger and Copland and, I hope, myself. And I admire all of my colleagues, I have three, the newest being Mason Bates, who is a wonderful new addition. Elinor Armer, who’s been here for 40-plus years, and David Garner, who’s been here almost as long, are outstanding teachers, and I think they have the freedom to teach in the way they believe. We have our aesthetic differences, but not serious ones. I ask my students to model, because that’s always what’s happened with great music. There’s an obsession with originality, which I think comes from Freud and Darwin. I think it’s a lack of connectedness to one’s ancestors, and also kind of a materialistic view of a human being, which has had a negative impact on culture. A human being is a spiritual being, in my experience.

Has Catholicism supported you in this approach?
Some, yes. But as a gay man, I have many friends who can’t believe I’m Catholic. I have no problem with my relationship with God or with Christ, being gay. Boulanger used to say, “There’s a lot in the Church I disagree with; however I must remain obedient.” I’m being obedient to something higher than whatever the institutional failings of the Catholic Church are.

And you feel supported by the Conservatory.
When [SFCM president] David Stull came in and said, we can be a true conservatory for the 21st Century, he made perfect sense to me. I think the school is getting better and better, which means we’re attracting better and better students, which means I have more talent to work with. And people in the community, the kind who serve on boards, are very excited about David Stull. Of course, he’s a fellow Ohioan; he was dean at Oberlin for 14 years, which was right down the street from where I grew up. Students are coming in with such enthusiasm now. And I recently was honored to get the Sarlo Family Foundation Award for Excellence in Teaching, just last month.

Will becoming a sexagenarian gain you anything?
I’d say I have a new-found freedom, which comes out of a sense of responsibility. I’m professing my truth, and the ones who have ears to hear it are drawn to me.

And some who’ve been drawn will be coming back to help celebrate you on Nov. 1. Tell us about the program.
I’ve always enjoyed doing alternate versions of my work, so I said, I’m gonna see if I can make my Sinfonietta, which was commissioned for chamber orchestra, work for 11 instruments. The players are all either teachers at the Conservatory or in the Opera Orchestra, and Michael Morgan’s conducting, I’ve worked closely with him for 25 years. The next piece is 24 Preludes, modeled after Chopin, one in each key, composed by 24 former students. They’ll be played by Scott Foglesong, chair of the SFCM Musicianship Department, and by Keisuke Nakagoshi, staff pianist and my former student.

Where are these students now?
All over the world, and I’m in touch with all of them. Nine still live here, two are teaching theory for us, a third conducts the Conservatory Chorus. Then there’ll be an intermission, and the in the second half there’s a Dance Suite. I sent eight other students a list of Baroque dances, and I said, pick one, and we’ll make suite.

Any conflicts of choice?
Two wanted to do a gigue, but I pointed out to one of them that it was really a forlane. These will be played by my 15-year-old precollege student, Tristan Yang, who’s brilliant, and he’s writing a piece. Then the last offering will be American Death Ballads, four ballads I wrote for [tenor] Brian Thorsett, an alumnus of the school who’s now teaching at Virginia Tech. John Churchwell from the San Francisco Opera is accompanying him.

So how many world premieres do we have there?
All of them! Thirty-four! And I’m not playing, or conducting.

You’ll just be having a great, proud time.