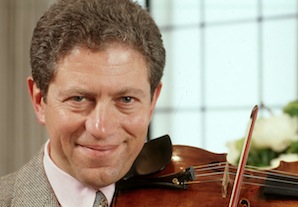 When SFCV connected with San Francisco Symphony Concertmaster Alexander Barantschik earlier this week, he was in the process of rehearsing this weekend’s all-Baroque program, which includes the first, fourth, and fifth “Brandenburg” Concertos. His solo responsibilities in that program and later this month in the Schnittke Violin Concerto No. 4 seem to this Russian-born virtuoso, whom his loving colleagues call “Sasha,” the best way to celebrate his 10th anniversary with the Symphony. Formerly concertmaster of the Netherlands Radio Philharmonic and London Symphony orchestras, Barantschik has served under Music Director Michael Tilson Thomas through acclaimed cycles of Mahler, Stravinsky, and Debussy, and has premiered works by André Previn and Viktor Kissine.

Firebird and Flash With Denève at the Symphony

So even though your anniversary is cited in the SFS publicity, there won’t be any party with cake?

Not that I know of. But for me, just to be able to play with my colleagues, this is as good as I can only dream of. Though nothing can be more challenging than to play with your own orchestra. It’s actually much easier to play with strangers.

It feels unusual, because usually I sit in my chair and am just part of the orchestra. When I solo, I’m surrounded not only by colleagues but by friends, so maybe that makes it more challenging. I want to do even better.

And you’re operating without a conductor [in the Baroque program]. Does that mean that they’re watching you in a special way?

Yes, of course, there still needs to be a coordinator. It’s not a string trio or quartet, and the cellos and violins are quite far from each other. But for me, it’s still like making chamber music with my colleagues. In some ways I would probably be more worried if it were some unknown orchestra, without knowing people. Here, we know each other’s body language, and we share ideas. It’s a very democratic process, because everyone is allowed to have their say about musical ideas, tempi, phrasing, and everything else, so it’s kind of a collective.

So it will be a different reading of the “Brandenburgs”?

Every time I play any piece, it’s different from how I did it the last time. I always look at my previous markings [on the score], and I disagree with myself, because it was me, but it wasn’t me today! And I’m not scared about that. It was scary in the beginning of my career, but I actually quite like it now, and I change all the time.

Has your getting older changed things?

Generally, my tempi are faster than they used to be. And my whole approach, especially for Baroque music — Bach, Handel, Vivaldi, and even Mozart — the strokes, the character of the sound, I like it much lighter than I used to. I do not believe anymore in the bow glued to the strings. I’m into a lot of air, shorter phrasing, lighter sound, and faster tempi. It’s part of my evolution. [Chuckles]

I think I witnessed quite a dramatic transformation. Many wonderful things happened, like the Mahler project, and “Keeping Score” [the PBS TV and radio series], and extremely successful, high-profile tours to the East Coast and Europe. We’re probably more noticeable on the world map than we used to be. Of course, there have been dramatic changes in personnel too, a lot of young, eager players, hungry to play, looking into new achievements, and this is something the public generally notices.

What makes the difference between a great orchestra and a very good orchestra is that our people are comfortable with taking a lot of risk.

But what also happens that the public would not easily know, and what makes the difference between a great orchestra and a very good orchestra, is that our people are comfortable with taking a lot of risk. People have the freedom to take rhythm and phrasing and make music which will not turn out to be a risk for the ensemble. This is very dear to me and close to my heart, that ultimate freedom of music-making, to be sure that you will be understood and followed, and that you, in turn, with your colleagues, will be able to give them the space and this feeling of assurance that, whatever they do, you will be with them.

What are the other job duties of a concertmaster?

It’s how to keep the tradition, and at the same time be open to anything new that’s good. Playing programs like we’re doing this week really brings everyone closer together. It makes us listen more closely to each other and really form a tight ensemble, because there’s no one regulating traffic, it’s just us on our own with our eyes and ears. And you can really hear how things are growing. This morning, when we started to rehearse, for a few moments it’s adjusting the sound, finding the right tempi, and then it’s just a pleasure. It’s like you start the engine of a great race car, and after a few seconds, it runs smoothly. I had a great time today.

What was different about your earlier work with MTT, with the London Symphony Orchestra in the ’80s?

That was a long time ago, I was different, and he was different. [Chuckles] But it was a different situation. Here we have three, four, or five performances of the same program, every week. There, the orchestra was playing two performances every week, but different programs, and maybe different conductors. Because of that, there was much less rehearsal time, and the programs could not be as challenging. There were rarely pieces performed that the orchestra hadn’t played before, and no time to learn big new pieces, like a John Adams commission.

This is how big the role of the instrument can be: It changes my perspective, my hearing, the colors, and everything else.

Did having access to the Heifetz Guarneri [his instrument, the 1742 Guarnerius del Gesù violin formerly owned by the virtuosos Jascha Heifetz and Ferdinand David] make any difference in your signing on with the SFS?

I didn’t even dream, when I came, that one day I would be playing that violin. It was known to me that it was kept here, in the Palace of the Legion of Honor, and that there was an agreement made by our director, Brent Assink, that it could be used by the Symphony’s concertmaster.

When did you first pick it up, and what did you do with it?

I believe it was 2003, and, you know, the violin had been silent for some time. It was occasionally played, but only for very, very short periods. I know that Isaac Stern had played it a couple of times, and Itzhak Perlman did, and Gil Shaham. But I had this feeling that the violin needed to wake up. It was not easy to make it sound as it sounds today. It took me some time, first of all, to get familiar with it; it’s not an easy instrument. Finally, the violin started to vibrate in my hands, so to speak.

What were its particular challenges?

Is not a very capricious instrument. Sometimes instruments sound different because of weather and humidity, but that’s not the case here. But it asks for great discipline, and by that what I mean is, there is a particular way to make it sound. It likes one particular way, and if it’s not “it,” then it can be very disappointing.

When you get it right, do you sound more Heifetzy?

[Chuckles] That’s an interesting question. Let me put it this way: Nobody can have a sound like Heifetz. But — I have a lot of Heifetz’ editions at home, his arrangements, fingerings, bowings, cadenzas, and when I played another violin, most of his fingerings, for instance, didn’t make much sense. Now that I’m using his violin, I must tell you, I had to rethink many things I did before, and I now understand the way he was working on particular pieces, and I returned back to his markings. And it works just fine! This is how big the role of the instrument can be: It changes my perspective, my hearing, the colors, and everything else.

This was also the Guarneri played by Ferdinand David at the premiere of Mendelssohn’s Violin Concerto in 1845, which you performed with the Symphony a year ago. Was that a magical moment for you?

Yes, and I did play that piece differently than I had before. I tried not to think This is what was played when the Concerto was played for the first time, because things like that never help, when you’re performing. But in the back of my head, it had its influence. And the orchestra kind of enjoyed it, thinking, Wow, maybe this is how it sounded back then.

NOTE: The author thanks SF Opera violinist Leonid Igudesman for providing information on his friend and former schoolmate's instrument and background in Russia.