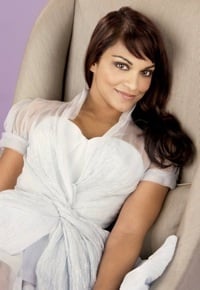 The clock said 10 p.m., but soprano Danielle de Niese, 31, was bubbling with energy. Just in the door from two hours at the gym, she charged into a phone interview on a day that also included a 4½-hour run-through of the opera that occasions her San Francisco Opera debut, Mozart’s Nozze di Figaro on Sept. 21. Talking off the cuff comes easy to the strikingly beautiful, Australian-born artist. Raised in Los Angeles, with a Valley Girl accent for days, she balances her exotic mixture of Sri Lankan, Dutch, and Scottish ancestry with an unassuming directness that bespeaks a sharp, even fierce, intelligence. Channeling the same infectious joy that helped win her an Emmy at age 16, when she was hosting segments on a popular Southern California TV show called LA Kids, de Niese engaged in a lively exchange about iPod technique, her SFO debut, and the Mozart of Music Director Nicola Luisotti.

What do you do at the gym?

Circuit training on the machines, as much cardio as I possibly can, and toning exercises. Everything to keep my heart in shape, and feel flexible, engaged, and centered. Then I swim in the pool for maybe 20 minutes, and go into steam. I sneak my iPod into the steam room, which is quite an ordeal.

You take your iPod into the steam room?!

Yes! If I can possibly have music everywhere I go, then I would have a microchip implanted in my brain. But I don’t do that. Instead, I wrap up my iPod in towels. …

And the moisture doesn’t destroy it?

Nope [laughing loudly]. Try it next time you go to the gym. You’ll see. It’s quite spiritual, I would say, to be that focused in a hot steam room, and then listen and have music in your whole being.

What is your choice of “music to steam by”?

[Laughing] I just put it on shuffle, put my fingers through the towels, and skip the ones I’m not in the mood for.

Today, I was listening to The Rake’s Progress. I’m dying to sing Anne Trulove, and I’ve had a couple of offers that I’ve agreed to do. I’ve been thinking about what I want to do with the character, and it was wonderful.

Talk about sweating through Stravinsky. Your earbuds must be a mess. Oh, I don’t want to go there.

I don’t really sweat into the earbuds because, the thing is, I put the buds in first. Then I wrap my head, because I don’t want to get my hair wet in the steam room. So my head is warm, and I sweat a little bit, but I also have a towel absorbing all the moisture. It’s quite fine, actually. They’re essentially locked up in the towel, so they don’t get wet either. [Laughing] I’ve worked for years on this technique!

Speaking of technique, how many weeks have you been rehearsing Figaro?

Do you often get such a long rehearsal period?

It’s awesome. But what’s quite interesting is that today is the last time we’re going to do any more rehearsing, because we only have three more rehearsals between now and the 21st. I know that sounds weird, but we have our first full day of piano dress [rehearsal] tomorrow. We’ll really be jumping in.

We’ve got the added bonus that [stage director] John Copley is here with us. That’s a luxury. We’re not doing this production flying blind, with a book full of stage directions. John is spot-on, really on the mark. He’s done something like 50 Figaro productions, and he’s been working for 50 years now.

He’s an absolute treasure trove of information. I keep telling him he should write a book. The stories he keeps telling us! The anecdotes! Oh, my god. His life and career are absolutely show-stopping. He’s a real force to be reckoned with.

Is this the first time you’re working with Nicola?

It is the first big, big time. I did sing three big performances of Nozze with him in Tokyo in the big concert hall, directed by Gabriele Lavia, an amazing Italian director who will do Don Giovanni in San Francisco next year. So, this is the first time I’ve worked with Nicola in America, and the first time in a fully staged opera house production.

What is he like in Mozart? I wonder what happens if a singer doesn’t have a big enough voice to carry over Nicola when he’s filled with passion and whips up the orchestra.

Nicola and I get along really well because we have quite the same kind of energy. I’m the same about everything I do when I’m working. It’s just super love. Love love love love for everything. And that’s one of the reasons I love him so much. I mean, I love working with him.

Nicola’s Mozart is truly original. It’s one of a kind. And it’s not different in his way with appoggiaturas. Instead, he’s different in that he finds some truly genuine moments where he controls greatly the pace of the music in a way that’s very, very different from anything that people will have heard in other Mozart that’s been performed.

The minute you get in the theater, you’ll hear it. He’s very fast-paced, he’s very lively. But then he has these moments when he brings the orchestra into a rubato of sorts that you’re not expecting to hear in Mozart if you know the piece well. He takes some freedom, and then gives it back, if you will. When you hear it, you go, “Oh, my god, well, that’s very interesting,” and it makes sense, and it works, and it’s just great, but it’s very original, and it’s very him.

The Met has just issued all these CDs and DVDs to celebrate the 40th anniversary of James Levine’s tenure [as music director]. They include the 1985 Nozze di Figaro where Kathleen Battle sings the role the most perfectly I’ve ever heard. What is it like for you to approach arias and moments like “Deh vieni non tardar” that are so well-known, and can be so transcendent?

Dramatically, I’m completely in it. The first thing that came to my mind was “intense,” but, funnily enough, it is not an intense aria. But it’s a very intense focus that I need when I’m singing it, because I have double intentions throughout the whole aria. What I really enjoy doing is taunting Figaro through that whole recit.

I’m singing it to the Count. I take that approach, because I know it’s going to make Figaro so jealous. There’s an element of sincerity, but there’s also an element of play.

I like to rub it in a little bit. “Oh, I’m so excited; I can’t wait to see him. Ah, I won’t be afraid, oh, I’m going to let nothing stop this nice moment I’m about to have WITH THE COUNT.” And I know that as he hears me panting and singing, that he’s assuming that I wouldn’t be singing about anyone else than the man I’m going to meet in the bushes, which is the Count.

Then I sing the aria. I’m really just enjoying the line of it. The line is so gorgeous and beautiful. It’s a very, very seductive aria. I’m singing it word for word. I try not to treat it like a piece that’s a jewel of an aria that I’ll sing very beautifully and make sure that everything comes out of my mouth sounds really good because it’s a famous aria. Instead, I try to remember that the aria is so beautiful because of its text, as well. The way that the line caresses all of these words — the rushing rivers and the breezes and the grass fresh — she says, “l’erba è fresca”: Everything is a word you can eat. It’s a tasty, tasty phrase.

I really enjoy all of that. And it’s so heartbreakingly sincere at the end. She says, “I would wish to crown your head with roses.” It’s bittersweet, really, because she’s playing, and then she’s not. She’s thinking, I can’t believe you would actually think me capable of betraying you.

My voice is growing so much right now.

At [email protected], I just heard a handsome young tenor, Matthew Plenk, who has been singing Britten at the Met. He told me that his voice was changing so fast that he was doing things that week that he couldn’t do the week before.

Yeah. That’s what it’s like for me now. It’s growing, my control is growing, and my access to certain tools is changing. It’s like trying to jump on a moving train. My instrument itself is moving and growing. It’s a wonderful, exciting thing, but it’s also a little daunting. It’s for the most part good, because everything is getting better instead of getting worse. Now that, I think, would be really problematic [Laughing.]

Right. Who needs a Maria Callas moment at age 31?