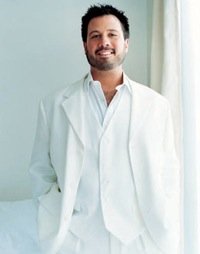 Change can be good. It certainly was for David Daniels. After studying at Cincinnati College's Cincinnati Conservatory of Music as a tenor, he switched to the highly unlikely vocal category of countertenor as a graduate student at the University of Michigan. Since that time, this award-winning singer has performed with opera companies around the world and helped put countertenors back on the musical map. He also has the distinction of being the first countertenor to give a solo recital in the main auditorium of Carnegie Hall.

You can hear Daniels perform with the Philharmonia Baroque Orchestra Jan. 15-21. In addition he'll conduct a master class for countertenors at the San Francisco Conservatory of Music on Jan. 19, which is also open to the public. In anticipation of his upcoming visit, he spoke about his career — and the importance of Michigan football and the Atlanta Braves in his life.

You’ve performed with the PBO before. I presume you’re looking forward to this return visit?

Yes, they’re a lot of fun. I enjoy Nic [McGegan, the music director], the Bay Area, and the players.

It was a decision that needed to be made. It happens in any career. It was a natural fit, and, once I made the change, doors opened up and things began to happen.

At the time, the career for countertenors really didn’t exist. Now, universities all around the country have one or more students [singing in that vocal register]. When I was in school in the ’80s, that was unheard of. I’m not responsible — don’t have that big of an ego! — but I’m part of the equation.

I’m also fortunate to be one of the few with an exclusive recording contract [with Virgin Classics]. I’ve won things like the Richard Tucker Award [in 1997] that helped get me noticed.

Your parents taught singing; that obviously influenced you. What was your life like as a child?

They taught me, but I never felt pushed. I also took piano and cello lessons. But no stage parents. No interest in seeing how much money they can make. If I had said I wasn’t interested in music, they would have been fine. They probably would have preferred it.

Do you feel like you’re exploring the range for countertenors, rather than just doing Baroque pieces?

No, not at all. Operatic Baroque roles are what I usually do, although I have forged into 19th- and 20th- century song repertoire. I’ve recorded Berlioz, which is 19th century.

Now for the important stuff: Are you still a big sports fan?

And it’s University of Michigan for football. Would you ever root for the Hawkeyes (sorry; I have to ask on behalf of my Iowa-raised husband)?

I love the University of Michigan football team, but I’d root for Iowa if they weren’t playing another Big Ten team. I haven’t been there, but my parents taught at Luther College in Iowa. I’ve heard good things about Iowa City.

And you’re even more of an Atlanta Braves fan. Even though San Francisco beat Atlanta in the playoffs, are you OK with them winning the World Series?

I moved to Atlanta four years ago. And I’m happy San Francisco won. I’m glad that, if the Braves were beaten, it was by the team that eventually won the World Series. I don’t feel quite as badly about their [the Braves’] loss.

It turns out that Buster Posey is actually a distant relative of my partner, Scott. So we have that connection.

Do you still play basketball?

Not quite as much. During the Young Artists program in Santa Fe in the summer of 2008, we played three or four times a week. Now, it’s harder to find time and people to play with. When you’re 44 to 45, you’re not really up to playing with the 20-year-olds at Georgia Tech.

What do you think you’d be doing if you weren’t singing?

I don’t know. It’s what I’ve always wanted to do and always envisioned. My grades were not amazing, so I don’t know what I would have done for university.

Any hobbies when you’re at home?

Usually when I’m in Atlanta, I catch up with friends. And there are Braves’ games in the summer.

What are you listening to these days?

Well, they aren’t really in Atlanta, but north of it.

It will be nice to come back to the Bay Area. It’s been a long time since I’ve done concerts in Berkeley. I guess I’ll also be in Atherton and at the Herbst Theatre in San Francisco. I’m looking forward to it.