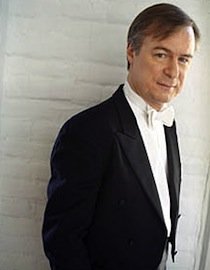 The American conductor David Robertson has been described as a born communicator — both as a conductor and in the way he engages the audience. A quick YouTube check confirms this assessment, but remarkably, the videos in which Robertson is conducting are outnumbered by the ones in which he’s speaking to an audience.

One of Robertson’s most powerful videos shows him delivering the traditional conductor’s speech at the Last Night of the Proms, 2009. Robertson concludes by describing the symphony orchestra, with its “wide diversity of instruments from different backgrounds and histories, from different parts of the globe with different developments and totally different sounds and looks,” as “a powerful symbol that the things which unite us are far stronger than the things which would seem to keep us apart.”

Robertson, who was both born (in 1958) and raised in Malibu, California, and educated at the Royal Academy of Music in London, is currently the music director of the Saint Louis Symphony Orchestra and principal guest conductor of the BBC Symphony Orchestra. Since his appointment by Pierre Boulez as music director of the Ensemble InterContemporain in Paris in 1992, he has established a reputation as a new-music specialist and has conducted a large number of world premieres. But that’s not all that he does.

You are known as a contemporary music specialist, but at your upcoming concert at the San Francisco Symphony, you will be conducting Rossini, Chopin, and Dvořák. What gives?

This is one of my first programs at the San Francisco Symphony where I am not pushing the boundaries. Next season, I will be doing stuff that is more challenging, I promise. But there is so much great traditional repertoire. What surprises people is that I love the Rossini overtures. They are very much underestimated — for the same reason that a lot of minimalist art is underestimated: It looks very simple when it is done to perfection. Go to any restaurant in Italy, order an insalata caprese, and they will give you a slab of buffalo mozzarella, some cut-up tomatoes, a leaf of basil, and some olive oil. And you think: What is this? This doesn’t take any trouble to throw together. But when you taste it, you realize that all the elements fit perfectly.

What do you look for when you program a concert?

I want it to be enjoyable on lots of levels. I try to put together a program, whether innovative or more traditional, that is something like a building with lots of different entrances and exits. Everybody can come in, in their own way; there is no “Enter Here” sign. The building has all kinds of nooks and crannies; somebody could sneak in through a window. All these different kinds of experiences justify a live concert for me. Everybody in the hall hears a different performance.

I try to put together a program that is something like a building with lots of different entrances and exits. Everybody can come in, in their own way.

This is very traditional overture–concerto–symphony program…

I agree, but it is not a bad format. And another way to look at it is in terms of orchestral culture and harmonic development in the 1800s, with Rossini’s overture to L’italiana in Algeri from the 1810s, Chopin’s Second Piano Concerto from around 1830, and Dvořák’s Seventh Symphony of 1885. You can see how Dvořák really tried to learn from Chopin’s emotional depth; by the time he gets to the Seventh Symphony, he has learned all of Chopin’s harmonic lessons and he combines them with the kind of immense rhythmic accuracy that you see in Rossini.

Does it bother you to be pigeonholed as a contemporary music specialist?

People will say what they want to say about you; they seem to need pigeonholes, but these are better suited for pigeons than for people. When you start as a young conductor, nobody knows you; your job is to do enough concerts to get people in the profession to notice you. When I started out in the ’70s, I conducted in a number of different places and since they liked what I did, I was invited back.

So, in Ireland I was known as a chamber orchestra conductor, specializing in early music; in the south of France and Spain I was known as a conductor of Italian opera; but in France I mostly did verismo and in Spain only bel canto. In Italy, I made my debut doing a big splashy late-Romantic work, so they brought me back for Richard Strauss and Stravinsky ballets. I was appointed at the Ensemble InterContemporain right after doing a modern piece at Radio France, but the next week I was doing Bellini’s Capuleti e Montecchi in the Théâtre des Champs-Elysees. And when it was announced that I was going to be music director of the InterContemporain, I was actually doing an all-Rossini tour of five cities in France with Marilyn Horne. Everybody who knew me with only one kind of repertoire got in touch — and they were all worried.

I wish I had the time to actually study Monteverdi scores so that I could perform them historically. I love them and I enjoy listening to them, but I just don’t have the time. And I so enjoy working with living musicians, both in the orchestra and as composers, that I end up doing just that. There are enough conductors who are afraid of this, and I am happy to step in and do the work for them.

What do they fear?

Conductors often get the feeling that they are the only ones who can make a decision. They come in and say, “This is how it should be” and the orchestra says, “Yes, Maestro.” A living composer may tell you “That is not right; what I want is this.” And that is very hard for some people’s egos.

During your speech at the Last Night of the Proms, you imply that music can make the world a better place. Really?

What I love about an orchestra is the huge combination of colors.Just take away the music and imagine what a bad place it would be. … That is why civilization is important. When civil societies become established and stable, all of a sudden human beings create an amazing amount of beauty. Anyone who has seen the dedication that music instills in people understands that exposure to music at a young age is a really important part of human development. People forget what a powerful part of the human psyche, of the human makeup, music actually is.

It doesn’t matter what kind; it doesn’t have to be classical. What is really important in music is the notion of listening and paying attention. When music is made in such a way that it doesn’t keep our interest, we stop listening. It doesn’t matter whether it is hip-hop, or rock, or folk-inspired music; it needs real dedication, a human quality from the performers, to encourage people to listen. Whether it is Pete Seeger or [Cape Verdean popular singer] Cesária Évora [1941–2011] or the San Francisco Symphony.

Would you venture making a comparison between the Saint Louis Symphony Orchestra and the San Francisco Symphony?

No, for the same reason why I cannot compare composers and pick a favorite. There are things that Boulez does that no one else does. The same goes for George Benjamin or Steven Mackey, or John Adams. Yet, I can’t say that I would trade them for the Bach B-minor Mass. That is why I feel so lucky to have all of it. What I love about an orchestra is the huge combination of colors. And in addition to that, you have all these people who do not only bringing their sound, but also their soul, and their own expression. And that is why I like working with different orchestras. The main reason we are playing music is because we love it so much. And that is a really great thing to get across.

What do you like about conducting in San Francisco?

One of the things I love about San Francisco is the audience behind the orchestra. Normally, a conductor bows to the audience and then immediately turns his back to them. But in San Francisco I am still looking at them, engaging them. And that part is really nice.