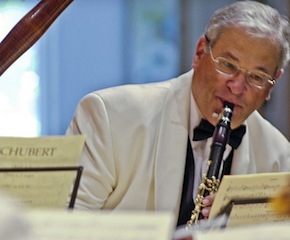 It’s taken some time, but this year [email protected] finally, and happily, can add clarinetist David Shifrin to its list of guest artists. The award-winning musician is equally happy to be appearing. Not only does he love chamber music, calling it his favorite, he also adores Brahms. So it’s a match made in heaven.

There’s no doubt that Shifrin’s resume is impressive, even for [email protected] artists. He’s one of only two wind players to win the Avery Fisher Prize, in addition to other honors. In addition to guest appearances as a soloist and with ensembles, he’s a member of the Chamber Music Society of Lincoln Center and a director of Chamber Music Northwest. And he’s on the faculty of the Yale School of Music, having previously served on the faculties of institutions such as Juilliard and the University of Hawaii.

Brahms fans, take note: Along with Wu Han and David Finckel, earlier this year Shifrin recorded the same Brahms Trios that he’ll play in Menlo Park. The recording isn’t yet released, but attendees at the Carte Blanche concert on Aug. 8 will be able to purchase the CD.

This is your first time at [email protected], but you’ve known Artistic Directors Wu Han and David Finckel for years. When did you meet?

Oh, we met 20 or 25 years ago. I met David first, when I played with the Emerson Quartet. I met Wu Han shortly thereafter.

How much time do we have? [laughs]

I’ve never seen any two individual people with as much energy and vitality and vision. Put them together, and it’s amazing.

It sounds like you’re looking forward to the evening?

I’m playing one of my favorite pieces, the Brahms Clarinet Trio, and the Sonata. I’ll get to play with Wu Han and David Finckel and Jon Kimura Parker. Plus, I get to hear the other music. I absolutely love Brahms. I’ll love hearing it in an interesting context, and there will be loads of treasures. It will be lots of fun. And I love coming to the Bay Area.

You also spend a lot of your time in Portland, as the artistic director of Chamber Music Northwest.

I’ve been playing with Chamber Music Northwest for the past 33 or 34 summers and have been artistic director for the past 31 years.

How have things grown and changed over those years?

Portland is a great city, and the program has grown along with the city. The city is substantial, but not overwhelming. It’s always been a good fit. It has the highest quality music that is very sophisticated, with a great symphony and opera. There is wonderful chamber music in the area that has been there all along. Chamber music is so flexible and adaptable to different venues. With that tradition, you know you can have an artistic end result.

Our audiences are wonderful. They love the music, and they’ve been waiting for months for winter to end. It’s a winning combination. Fifteen concerts are at Reed College, so people can picnic outside. The only bad thing is that until this year, the summer season in Portland has conflicted with [email protected]

It’s a good bet. Everyone should come visit.

Do you live in Portland?

No, I’m in Norwalk, Connecticut, halfway between New York City and New Haven. I play at Lincoln Center often, and I began teaching at Yale in 1987. I do spend five weeks in Portland in the summer and come back in fall, winter, and spring for the Encore series.

What drew you to the clarinet?

I love the clarinet, its versatility and adaptability. It’s the chameleon of instruments.

As a kid growing up in New York City, I was pretty typical, you know — playing stickball in the streets and so on. And some of my friends from stickball played musical instruments, so I thought I should play. Then I saw The Benny Goodman Story with Steve Allen, and I wanted to play the clarinet. I must have been around third or fourth grade.

When did you know you wanted to play professionally?

For some reason, when I was around 13, I thought, If I can do this instead of having a job, I’ll like that.

So the music worked out, rather than, say, a baseball career?

Yes. Plus, there is no professional stickball, unfortunately.

I’ve played the saxophone and, of course, the piano as a secondary instrument during my student years. I wish I’d practiced the piano more. Gary Graffman, the director and president of the Curtis Institute, wrote a book with a really great title: I Really Should Be Practicing.

Yes. With the clarinet (not the piano), for me, it’s a satisfying thing to have the time to really, really practice — to take the piece apart, analyze it, and try different ways. We strive for perfection, though we can’t reach it. At chamber music festivals, we strive for perfection as a group; it’s the same quest, but not as solitary.

It sounds like your parents weren’t musicians or involved in the music world.

They listened to music. My father ran a wine shop at Lexington and 31st. It was one my grandfather started right after Prohibition ended.

So you might have ended up running a wine shop?

It would give me a good excuse for trips to Napa and Bordeaux. Notice I think of the traveling! That’s probably because traveling is such a big part of a musician’s life. I’m in Portland, and I’ll be headed to Vail to play. And of course, I’ll be in Menlo.

I probably would have gotten an education degree, and I guess I’ve fulfilled that since I teach at Yale, but I’ve always wanted to play.

Though I do like the wine in Portland and the Bay Area.

What do you do in your spare time?

Well, I have four children, and three are triplets that are not quite six, so every spare minute at home I’m dealing with them. They’re great. On the road, I love to play golf when I can. I figure, in a few years’ time, I’ll have a built-in foursome. My 17-year-old now won’t play golf, but he’s athletic, the captain of the varsity football team. He’s musical, but that’s not where his interest lies.

Usually, I listen to the music I have to be performing. Over the last week I’ve played pieces by 10 different composers. We did a world premiere by Marc Neikrug and something by Maurice Emmanuel, whom I had never heard of. Last night and tonight it is Beethoven, with pianist Andre Watts and cellist Nina Lee.

Otherwise, [I listen to] music I enjoy. Opera, pianists, and singers.

My son is giving me an education in pop music, making up for what I call “my lost generation.” He’s showing me videos on YouTube of groups from the ’70s, ’80s, and ’90s. They’re before his time and I haven’t seen them, so we’re both watching.