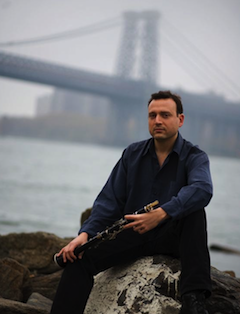 Composer and clarinetist Derek Bermel has been a hot commodity for two decades. Ever since his orchestral work, Dust Dances (1994) was played by the American Composers’ Orchestra, he has steadily received high-profile premieres and commissions, and three recordings of his works. At 47, he is established on two coasts, having just finished a residency with the Los Angeles Chamber Orchestra, and begun a term as artistic director of the ACO.

His music has been played here and there on new music programs in the Bay Area, but the average listener may have some catching up to do, given how prolific Bermel has been. The New Century Chamber Orchestra has finally taken the plunge, naming him their “Featured Composer” for the 2014-2015 season, and giving us all an opportunity to have a sustained, live introduction to the music of this highly appealing composer.

The first concerts with Bermel and the NCCO come up on Sept. 11-14, a set with the unlikely title “Carmen Returns.” Bermel will be featured on clarinet, in a duet with NCCO Artistic Director Nadja Salerno Sonnenberg and will also include the composer’s A Short History of the Universe (as related by Nima Arkani-Hamed) (2013) and the bouncy octet Oct Up (1995) for double string quartet.

In our conversations he did not come across as a stereotypical New Yorker (speaking as a stereotypical New Yorker myself): He is thoughtful and often deliberate in his speech, and often adds important ideas or details almost as an afterthought. He composes, he tells me, in almost the same way, revising constantly, to the despair of his publishing company, which often has to reset his scores.

Bermel’s style comes from an urban upbringing that included a wide variety of music.

When I was growing up, I was playing in a rock band in junior high and high school, and I was also very interested in hip-hop. It was right when hip-hop was coming up, in the late seventies to early eighties and it was an exciting time to be in New York. So even in junior high I had memorized all these rhymes and everything. And then I was playing jazz; I played saxophone in the jazz band. Later I played piano in the jazz band — unfortunately, I had to replace Joey Caldarazzo who later became one of the great jazz pianists, I mean he plays with Branford and like that. So I was, like, replacing him in the high school jazz band.

But all these kinds of music they were just adding richness, and whether it’s rap or Bulgaria [music], I’ve just followed my heart. Every now and then I’ll just hear some music and say ‘wow, that is so beautiful, I want to know what goes into that.’ I used to transcribe Charlie Parker solos, Thelonious Monk solos — I wanted to get into that music, to figure out how to play it. And I knew I could never have the facility of someone who grew up there or have that kind of understanding of the music, but maybe I just thought I could get some sort of insight. And the insight sometimes comes in strange ways and unexpected ways.

In a way, this story of Bermel’s youth illustrates the futility of naming the composer and others of his generation as “eclectic.” All composers are eclectic, the only question being how much of those environmental influences they’ll allow into their music and in what form. If anything in Bermel’s background would strike a lifelong classical music fan as odd, it might be his close attachment to rap, and yet to hear him tell it, it was just a part of the world he grew up in:

Everyone I knew — I used to run track and everybody on the track team knew all the songs by UBFO and Run DMC — I mean they knew everything, all the lyrics. So I was just part of that generation and if I’d been born 10 years earlier I’d have been listening to Pink Floyd, the Jackson 5. But the music when you’re a teenager, I mean it resonates with you. And then when I heard Rakim it changed everything. He was able to express so many complex rhythmic structures in a way that nobody had before him. So when that album came out, Paid in Full [1987, one of the most celebrated rap albums of all time] and I heard this guy saying “Knowledge will begin until I finish this song/ ‘cause the rhyme gets rougher as the rhyme goes on/ You sweat as you step about to get hype/ or should you just listen to the man on the mic” [he continues with another verse of “As the Rhyme Goes On,” quoting it in rhythm] — you know what I’m saying, I mean that stuff is deep!

Of course, not every musician with this background would go on to study ethnomusicology with Israeli composer Andre Hajdu, or take off for Bulgaria, Ghana, Brazil to learn various world instruments and folk styles, or compose Dust Dances, Thracian Echoes (2002), or the spectacular Canzonas Amazonas (2010), written for the brilliant vocalist Luciana Souza and Gustavo Dudamel and the L.A. Philharmonic, which draw on those experiences.

But in this age of jet travel and electronic reproduction, those sounds are just not as exotic as they used to be. Bermel is still “listening to his heart,” and his listening may not go further afield than many in his audience. That’s how he makes a connection, and the audience responds partly because he’s bringing this music into the concert hall almost in the spirit of play. In his music, the performing musicians have to push their own playing styles and techniques to accommodate the sounds of another culture and another arena. Let’s call it a devious form of “extended technique,” the direction to use unorthodox or non-traditional means of producing vocal or instrumental sound. That’s why it’s so critical to Bermel’s purposes that Luciana Souza be the singer in Canzonas Amazonas. She forces orchestra musicians to adapt to a style outside of the norms of orchestral playing.

Bermel’s method becomes clear when you hear him discuss Dragon Blue (2012), an ensemble piece that employs Western and Chinese instruments, and which really needs to get a performance in San Francisco:

I found that some of the sounds Chinese instruments make remind me of the sounds Western musicians make when they’re doing blues inflections. So I guess I took that notion and abstracted it a little bit and tried to write a piece where everybody was playing blues. But Chinese players didn’t necessarily know that they were doing that. So I was trying to write it in a way that would get them to play that way. So I had to study their instruments to figure out what kind of notation would make them play a bluesy sound.

In the event, the project also forced the composer to extend his own technique, something that almost all composers find worthwhile. It’s not hard to hear something of the story behind these pieces become immanent in the sound of the music itself. That’s a side benefit of creating drama through the interplay of musical styles. But even when Bermel is at his most abstract he hooks audiences with a title that implies a story and dovetails with the sonic ideas. The urge to ground the abstract in the concrete comes to the fore in A Short History of the Universe:

The piece is directly inspired by the lectures of Nima Arkani-Hamed, who is a physicist who was at the Institute for Advanced Studies in Princeton when I was there. (I was there for four years.) I was interested because I had studied physics as an undergrad (he’s a string theorist and I’ve always found string theory fascinating).

A lot of his talks were about gravity, and his description of gravity was very dynamic. And I tried to express that in musical terms. And this seemed like a great mix because I had a commission from Wolf Trap for me to write a piece for myself [on clarinet] and the JACK Quartet. Nima talked about how gravity could be manifest in many different ways. [In this piece] I tried to express aspects of gravity “horizontally,” like in time or in speeds. And the “vertical” aspect would be, say, the contour.

I say “contour” instead of “pitch” because in the first movement I tried to make pitch not so audible, which is something I’m kind of interested — not stressing pitch, to make the focus the way the line moves. So you don’t have a sense of absolute pitch the way you generally have in Western music but more this continuum into which a pitch falls at certain points. So I was trying to curve time and space, which are the same thing in physics but I kind of separated them out in the music.

And that sense of pitch indeterminacy brings us back to the folk musics Bermel has studied, which are often ornamented or melodically constructed with microtones, pitches in between those of the standard Western scale. A good number of 20th-century composers, beginning, perhaps, with Bartok, were going to the same place, using the same “folk music” sources of inspiration. Bermel takes up these ideas in his own idiom.

Bermel’s success in translating all these ideas into melodically clear, often rhythmically joyous music that people actively want to listen to is not an intellectual triumph but an intuitive one. It’s the leap of an artist, the constant surprise that comes with rediscovery of the familiar in a new guise.