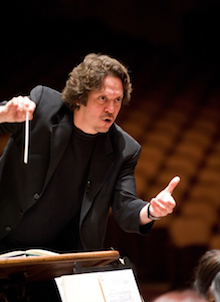 Congratulations on the California Symphony appointment.

Thank you. I think this orchestra has so much potential, and I’m looking forward to getting things rolling.

What was your reaction when you learned you’d been selected?

First was elation. I was so happy that the search committee validated the feelings I’d had when I was working with the musicians. I felt there was a great rapport and ease. We did two wonderful concerts. The first was with Beethoven’s Symphony No. 9, although I was not an official candidate at that time. In the second concert, I did the Prokofiev Symphony No. 5 and the Adams. I hadn’t gone to any of the other concerts, and I knew that the other music director candidates were very good — I know some of them — but just in terms of my concert, I thought it was a wonderful meeting of the minds. So I was very happy. Then, my second thought was: What was I going to program?

That second program did have a wonderful quality of rapport and ease. You did know some of these musicians already, correct?

Sure. They’re members of the Freeway Philharmonic. These folks are members of the San Francisco Symphony, S.F. Ballet and S.F. Opera orchestras — all three of which I know the players very well. A lot of them are also subs with these orchestras. So they’re very familiar faces to me. I sort of knew that going in, but there’s something very reassuring to see them when you walk out onstage for a first rehearsal. I think that helped establish a relationship quicker than with an orchestra full of strangers, although I don’t normally think about that too much. But I do think that because I knew these folks, they know how I work — I welcome conversation, dialogue, exploring music together during rehearsals.

The California Symphony’s approach has been one of encouraging young artists, performing American repertoire, and commissioning young composers. Is that something that appealed to you, and will you carry that forward?

Yes, yes, and yes. Because I had to quickly come up with a season, I needed to think of things that were characteristics of the California Symphony, that were worthy of celebration and continuing forward. Those were the three things that I used to create this new season. On all four of the classics concerts, there will be a piece by a living composer, the final piece being the premiere of a work by the Young Composer in Residence. I certainly am planning to continue that program — it’s a unique and wonderful program, and I plan to hold onto that and expand it.

Of course, three of the four soloists are young, up-and-coming musicians I have known or have met and wanted to showcase in the Bay Area. The opening concert will feature Kuok-Wai Lio, who I met and worked with at Grand Rapids Symphony. We did Mendelssohn’s First Piano Concerto, and I was so taken by his seriousness. It was like I was working with an old soul. The whole orchestra felt that way — his dynamic and way of music-making is so wonderful and serious and meaningful. So he was one of the first names that popped into my mind — and, in the intervening months, he won the Avery Fisher career grant. So he’ll be coming to the Bay Area for the first time.

One of the other soloists is Kenneth Renshaw, a Bay Area native who was one of my first concertmasters at the S.F. Symphony Youth Orchestra. Just last year, he won the Menuhin International Violin Concerto Competition. He’s another rising star, and this will be his debut with a Bay Area orchestra. The third soloist is Ilya Yakushev, who I worked with at S.F. Symphony. We really hit it off, and so he’ll on a program later in the season.

Talk a little more about this first program.

My first assignment, when I moved to San Francisco, was to prepare the cast and conduct all of the rehearsals for the first two weeks of Doctor Atomic. At every rehearsal John Adams was sitting at my left and Peter Sellars was at my right … John and I have worked together many times since then. To celebrate that relationship, I’m starting the concert with The Chairman Dances. John was also on the committee when the Young American Composer in Residence program was founded, he helped select Theofanidis.

The California Symphony has a great openness to living composers, and I want to celebrate that. I want to bring in soloists and work with concerti that aren’t as well-known or as often performed.The piece we’re performing with Kuok-Wai Lio is the Mozart Piano Concerto No. 20. It suits his personality very well. He has that Old World sensibility, ideally suited for Mozart. The second half is the Dvořák. When I first moved to New York I studied conducting with Zdenek Macal, who was music director of the Milwaukee Symphony and later the New Jersey Symphony. He would often program Dvořák, recorded all the symphonies twice. So this piece is close to my heart — I learned it from a wonderful Czech conductor with a great tradition.

This is a three-year contract. What kinds of things do you plan to do over that time?

I certainly want to continue the tradition of performing works by living American composers. Aside from the California Symphony’s tradition of promoting composers who have become well-known — Chris Theofanidis, Mason Bates — there are many composers I went to school with who have gone on to major careers — Nico Muhly, for example. The California Symphony has a great openness to living composers, and I want to celebrate that. I want to bring in soloists and work with concerti that aren’t as well-known or as often performed. And I want to program the symphonies of well-known composers that aren’t often played. Bruckner’s Symphony No. 6, for example. Dvořák's No. 6 is not often performed. I’d like to have mini-festivals of specific composers. Beethoven, for example — perform two works by Beethoven, and then include a piece that inspired Beethoven, or was inspired by him.

Will you continue your work with the San Francisco Symphony Youth Orchestra? You recently finished touring and recording with the ensemble.

Yes. I just finished my fourth season with the Youth Orchestra. When I first started, four years ago, I knew the many recordings Alasdair (Neale) had done with the Youth Orchestra back in the heyday of CD recordings in the 90s. I was very fond of their recordings of Rachmaninov’s Second Symphony and Mahler’s Symphony No. 5. I proposed that we re-ignite the recording initiative. Budgets were tight, but that was a dream of mine, and I planted the seed. Then this tour came along, and every venue records the performances of their orchestras. So we did that, and by the time we got to Berlin, which was the second to last concert, something was in the air. The camaraderie, the level of performance, was unbelievable. So we said we should see what happens with the recording.

I’ve always said I treat the musicians of the Youth Orchestra as young professionals, and my goals with their concerts are the same as they would be with any professional orchestra.Well, it was one of those amazing moments — time just stood still. We were able to get a great archival recording. We did some research to see if it could be remastered, was it technically good enough for CD release, and so forth. And it was. So now we have a new release of the Youth Orchestra. It’s a wonderful document of a very special night.

So if I were to encapsulate the last four years, that’s a great story. I’ve always said I treat the musicians of the Youth Orchestra as young professionals, and my goals with their concerts are the same as they would be with any professional orchestra. But we just had the added bonus of many weeks of intensive rehearsal, really getting into the core of the piece, whereas a professional orchestra has four rehearsals and then you get into the performances. It’s very close to my heart, I don’t even want to think about that time that it’s not part of my weekly life.

As a conductor, how do you create a profile and build rapport — not only with the musicians, but with audiences?

The biggest challenge we have now is that a lot of the audience is coming to concerts with very little music education. It used to be the case that when we played Beethoven’s Fifth Symphony, everyone knew what that was. That may not be true anymore. As a conductor I can’t go into a concert with any assumptions that the audience has any pre-existing knowledge of the music itself. I do expect that they’re there because they have a passion for music. So I need to engage the audience — without pandering to them, or feeling that I need to educate them in a condescending way — and share my excitement about the music in a visceral, immediate way, not necessarily an intellectual or academic way.

I need to engage the audience — without pandering to them, and share my excitement about the music in a visceral, immediate way, not necessarily an intellectual or academic way. I've started speaking at every concert.I’ve started speaking at almost every concert — I do that with the Green Bay Symphony and the New Hampshire Music Festival — not necessarily for every piece, maybe just to introduce the program. I’ve gotten great response, and I think this is something that all music directors will have to do. Of course I have a great role model. Every time MTT turns around to the audience, you can practically publish it. He’s so engaging and so full of wonderful information. So, for me, that’s a major component in breaking down that fourth wall. I hope we can establish a family concert type of event with the California Symphony. The old observation is that the audiences are aging. That may be true. But through family concerts, the S.F. Symphony is not only engaging children, but engaging their parents as well. The dialogue I come up with is not just geared to the kids.

Will we be seeing you in opera performances, and will you introduce opera music at the California Symphony?

I certainly hope so. I have every intention of pushing that agenda. Of course, staged opera is always very expensive. But there’s a great love for opera in the region — Festival Opera is there, of course — and I hope to work with that. Singing is very close to my heart, and every time I walk into the opera house across the street from where I currently work I get a little nostalgic pain. So that’s definitely on the agenda.

What was your first instrument?

Piano was my first instrument. But my main instrument through college was French horn.

Why did you become a conductor?

I became obsessed with classical music in high school. I had a good friend — he played bassoon, I played French horn — and we discovered classical music together. He became a composer, and I became a conductor. But the main reason was my high school band director. He was and is one of the best conductors I’ve ever seen. He was a great educator. I was very influenced by him. I was a Music-Ed major. But that morphed into conducting orchestras, because my French horn professor conducted the orchestra. At my very first lesson I asked if I could conduct an overture. At a big school, that would have never happened. But at U of R, I started conducting at every concert. They encouraged me to pursue it as a profession. That teacher is retired, but he still lives in Reno, and he comes down once a year for a Youth Orchestra concert. I’m always just that much more nervous when he’s there.