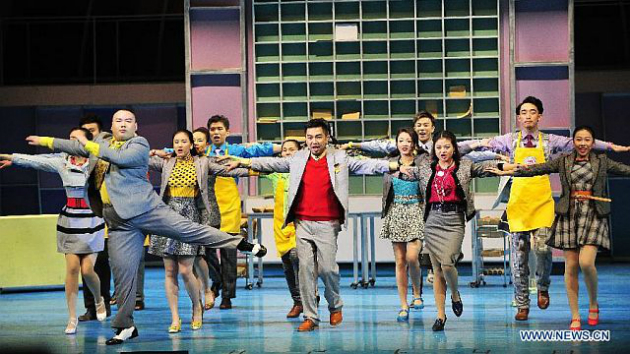 Earplay's Mary Chun has been busy helping to set up Beijing's Theater 77 for a press conference tomorrow, Dec. 4. More than 300 journalists and investors are expected to hear about and see excerpts of a huge ongoing project to bring Broadway musicals to new audiences numbering in the millions.

But even so, in the middle of the long-distance interview, speaking from Beijing, Chun still thought of the homefront enough to plug her Earplay ensemble's season-opening concert on Feb. 1 in Herbst Theater "for an encore performance of Andrew Imbrie's Earplay Fantasy" (and the music of Stefan Wolpe, Shulamit Ran, and Eric Sawyer).

Chun is a musical jetsetter — she has conducted John Adams premieres in Canada and Europe, led performances from the East Slovakian State Opera to the Texas Shakespeare Festival performances, worked with Kent Nagano in Lyon, and is featured as one of the few professional Ondes Martenot players in the world. Yet she is always reliably re-orbiting to the Bay Area. 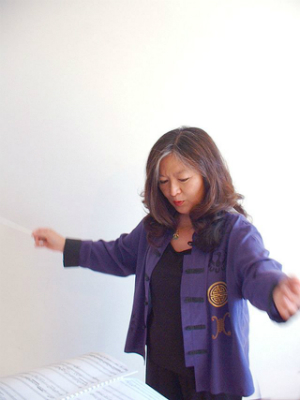 Chun received her Master of Arts degree from S.F. State University, studying piano with Carlo Bussotti and conducting with Lászlo Varga (former principal cellist of the New York Philharmonic). She conducted the world premiere of Carla Lucero’s opera, Wuornos; was on the conducting staff of San Francisco Opera; led the Empyrean Ensemble at UC Davis; worked with West Edge Opera, Opera San José, and so on.

We first talked about her current adventure in China shortly after she had an "American-style Thanksgiving dinner" in one of a dozen restaurants in Beijing serving American ex-pats and Chinese gourmets in search of the exotic turkey feast. Then, already in December, she mentioned seeing the sun for the first time in a long while because of "the horrific air quality we have had, in the category of 'emergency conditions for the entire population,' now somewhat alleviated when the government ordered all factories shut and closed all major freeways across the country."

Then we got into the business of American musicals in China.

What is your involvement with the Broadway-to-China project, an idea that initially thwarted even Cameron Mackintosh, one of the greatest producers of them all?

In the latest round, I arrived in Beijing at the beginning of November for rehearsals of the Seven Ages Company's new production of Dale Wasserman and Mitch Leigh's Man of La Mancha and it's been amazing to work on this Broadway classic with China's first generation of musical theater stars.

The all-Chinese production, in Mandarin translation, will premiere at the Shanghai People's Grand Theater Dec. 18, in Shanghai, where it will run until Chinese New Year. After the Spring Festival holiday, it will move to Beijing for another extended round of performances in April-May.

Who do you work with and how did this particular Broadway project begin?

I work with my visionary producer, Ivy Yang. Early last year, she invited me to work with Beijing-based stage director Joseph Graves on the Beijing premiere of the Tony-award winning "coming of age" musical Avenue Q, which proved to be a popular box office success beyond imagination in the capital city. Since the May 2014 Beijing premiere, the production has run for additional, extended rounds in Beijing and Shanghai in addition to a 50-city national tour this year. "Who could anticipate how strongly [Avenue Q] would resonate with Chinese audiences?"

Who could anticipate how strongly this piece would resonate with Chinese audiences? Singing and dancing Sesame Street puppets discussing contemporary issues of sexuality, racism, and the peculiar expectation of entitlement that youth face today? There's an unspoken "don't ask, don't tell" policy regarding certain societal freedoms that we Americans enjoy at home that somehow the puppets are allowed to give voice to here in the theaters. And the audience goes crazy to hear it!

The January 2015 premiere of Pulitzer-prize winning classic, How to Succeed in Business Without Really Trying, brought me back for my second project, again with stage director Joseph Graves. A major component of the audience success of Seven Ages productions vs. the handful of other Chinese musical production companies is the strength of the translation.

China Daily has noted that the the musical and its title were picked up in a newly-coined Chinese word "successology," a faux science with some slavishly loyal followers and some who just thumb their noses at. In China, the notion of success, especially as conventionally defined, has become both a shot in the arm and excess baggage. "Mandarin is a tonal language and the challenge of matching a word possessing its own internal intonation [in English] to a particular melodic shape is significant."

What's involved in translating not just the words, but preserving the meaning of lyrics as they are being sung?

As you know, Mandarin is a tonal language and the challenge of matching a word possessing its own internal intonation to a particular melodic shape is significant. Loesser's highly melodic numbers in How To Succeed ("Happy to Keep His Dinner Warm," "Coffee Break," "Rosemary") presented translation puzzles and we continued to tinker with these later when the show moved to Shanghai and again when it moved back to Beijing this summer.

In the early stages, Joe works closely with musical specialist translator Vivi Cheng to craft a Mandarin translation that rings true with the English script and lyrics. When I arrive, translation work continues in the music rehearsal room and I work with Vivi and the singers to fine-tune words/syllables for ease of "singability."

Writer's Note: There are so many aspects of transplanting Broadway to Chinese soil. Just one fascinating item is written about in an article about the work of costume designer Peggy McKowen