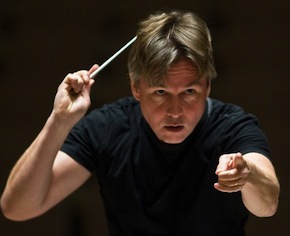 Breaking news from University of Louisville declares Esa-Pekka Salonen, the 2012 winner of the $100,000 Grawemeyer Award for Music Composition for his Violin Concerto, written for Leila Josefowicz. Many in this part of the world know Salonen as conductor laureate of the Los Angeles Philharmonic and the orchestra’s longest-serving music director. Officially at the post from 1992 to 2009, he elevated the quality of the orchestra and ushered in such milestones as the Disney Concert Hall. Yet the Finnish conductor is also a composer, a favorite among stars such as pianist Yefim Bronfman and violinist Josefowicz, and a champion of new compositions, conducting many world premieres.

This concerto will be showcased on Dec. 8, 9, and 10 as Salonen conducts the San Francisco Symphony with the masterful Josefowicz soloing. SFCV spoke with him after he finished a rehearsal in Los Angeles, where he was preparing the premiere of Sirens, a piece by Anders Hillborg, dedicated to Salonen.

Your schedule is still pretty heavy on conducting. Have you had more time for composing since leaving L.A.?

I only conduct about half the year, and the rest is for composing. Scheduling is difficult because the 50 percent of the time I’m home has to contain so-called “life”: time with the family, recreation, holidays. … I think I may have to cut the conducting even further. The ideal balance may be 40 percent conducting, 60 percent composing — a balance I haven’t quite reached yet.

Do you have a regime you need to follow?

I need to block off longer periods of time to be able to compose, especially the initial stages of writing a piece which needs a long time to get going — getting into the world of a new piece. Once that’s done, you know what sort of animal you’re dealing with and the kinds of expression and vocabulary, and then you can work more sporadically. At the initial stage, it’s very disturbing to go to someone else’s music and try to identify with that before the new piece has reached any sort of form yet.

How do you clear your head of all of the composed music to uncover the not-yet-composed?

The only thing that helps is time. If I sit down and try to listen to my own mind, if there was any new music in there, I don’t think I could hear it from the chaos of those other composers. It just needs a few days, or a week. When I was younger, a few stiff whiskeys helped. Now, exercise — running, swimming, lifting weights, or something — mindless physical activity seems to do the trick, along with the whiskey [laughs].

Is there any one orchestra you’re spending a lot of time with?

I’m the chief conductor of the London Philharmonia Orchestra, so that’s where I do most of my conducting these days. It’s a 12-week commitment per year. Beyond that, I do some guest conducting in Europe at the Vienna Philharmonic, several German orchestras, and some opera like at La Scala, the Met[ropolitan]. In this country I go to L.A. and Chicago frequently, sometimes New York, and soon San Francisco, which is fun since I haven’t been there in some years.

How does it feel to be back in L.A. and working with Hillborg?

It’s just great to be back. I miss the orchestra and all the people in it, and it’s very nice to be here. They’re playing well and I’m very happy. Thanksgiving is coming up, too. I’ll spend it with my daughter, who is in school in New York — she flew here to see me. It’s a great opportunity to reconnect.

This week, along with Beethoven, we’ll do a world premiere by Anders Hillborg, for chorus, orchestra, and two soloists. We’ve been working together for years. We got to know each other at a contemporary music festival in Scandinavia back in the day, and I’ve commissioned several pieces from him. We’re “brothers in crime.”

Congratulations on winning the Grawemeyer Award. You’ve said that this work [the Violin Concerto] is a very personal piece for you. More so than your other compositions?

It’s different each time. Sometimes a piece is a realization of a formal idea or textural idea or something that doesn’t necessarily have a personal narrative. Then there are pieces that have more of a story. This one, I was writing during my last season in L.A., and after 17 years it really felt significant. It came out as a personal statement as to where I was in my life, as a musician and as a human being. There are things that are very “L.A.” about it, and some things that are looking into the future. When I hear it now a few years after I wrote it, I feel like it’s a sort of cusp creation — one foot on each side — and maybe it’s that quality that makes it interesting.

It sounds like it’s challenging for the violinist. Is this a barrier to having young people play it?

It’s incredibly hard to play. Leila [Josefowicz, the dedicatee,] was involved in the writing of the piece. I ran lots of technical things by her; lots of this was by Skype from different countries on different continents. But she was very essential in the process, and plays it on a very high level. She had exclusivity for the piece for a few years, and now several others are starting to play it. It’s fascinating to me to hear completely different approaches, with equally powerful and valid points of view. It’s a strange feeling, like discovering your kids have a secret life you know nothing about. For a composer, it’s one of the most inspiring but frightening things — to let go of a piece and send it out of the house, where you can’t control it or protect it.

And now it is also award winning.

That’s a nice detail. It’s so wonderful! I was very, very happy about this, mainly the fact that on the list of past recipients are so many people that have been influential in my life. Many of them are dead, like [Witold] Lutoslowski, [György] Ligeti. I worked with them a lot as a young conductor and composer, and they had a big influence on me. Then people like Pierre Boulez and John Adams are people who have been working for decades now. It felt great to join that list of people who I so admire.

Do you have any new pieces you’re working on now?

I’m just about to start a new orchestra piece, so it’s in the early stages. It will be a big co-commission with European and American orchestras. Other than that, I’m working on a short piano piece for Yefim Bronfman, which he’ll play in March.