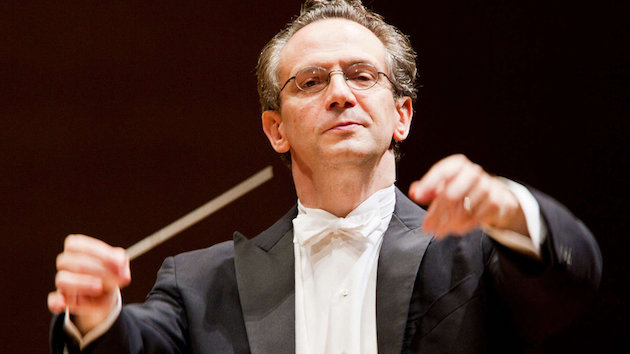 Until a few years ago, articles about Genoa-born conductor Fabio Luisi focused on his success across a broad repertoire on podiums in a variety of European cities — including Graz, Vienna, Leipzig, Dresden, Geneva, and Zürich, and guest appearances elsewhere — or on his being summoned to our country to take on several major productions for an ailing James Levine, at the Metropolitan Opera. During his acclaimed tenure with the Met, he won the 2013 Grammy for Best Opera Recording, for the company’s Der Ring Des Nibelungen. Then it got out that the Maestro was maintaining a second career, based in his Manhattan apartment: he was making perfumes, which were being sold at the Met’s store as well as online at FL Parfums.

When Luisi leaves the Met after this season, he’ll be maintaining his musical directorship with the Zürich Opera, starting the same post with the Florence Opera, and serving as principal conductor of the Danish National Symphony Orchestra. And he'll continue, in Europe, his successful experiments with the sense of smell. Luisi found time before the first of two engagements at Davies Hall in the first and last weeks (with the S.F. Symphony and Igor Levit) of this month, to chat with SFCV over espressos at the Parallel 37 restaurant in the Ritz-Carlton. He speaks gently, with remnants of an Italian accent and inflection. 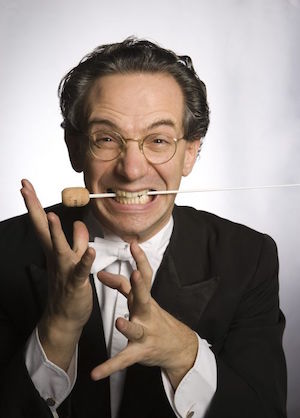 What has helped sustain you professionally in so many different places?

The job I have forces me to be flexible, but I have good communication skills. I try to be sympathetic, I like people, and I like different mentalities, and this helps a lot.

Is it safe and appropriate to try to characterize an orchestra?

It’s not safe, but it’s appropriate. [Laughs] There are two factors: The first is the people, where do they live? The character of an orchestra is fairly close to the character of the people living in that particular city or country. The second factor is tradition. For example, speaking of Philadelphia, the orchestra has traditionally a European sound.

Imported with their European conductors?

Yes! It’s timbre, the Ormandy timbre, and Muti, and Sawallisch. Now, when they hire new musicians, they try to hire those who live in that world of sound.

Wasn’t Sawallisch a particular idol of yours?

Because of his broad repertoire, his technical skills, and the way he approached a musical work, which was very no-nonsense. And he was a practical man, not searching randomly. He wanted to achieve a result.

Your repertoire is also extensive. Is that knowing yourself as much as the repertoire?

It’s a combination. It’s where I fit better. If you put me with Russian opera, I can’t speak Russian, so that’s already an obstacle — it’s crucial to know the language, for me at least. But I admire many colleagues of mine who conduct opera when they don’t know one word of the language.

Will your program here, in this first weekend, showcase the breadth of your affinities?

Quite well, but it’s lacking one of my core periods, which is the late Romantic. I’ll be doing Nielsen [Symphony No. 6], which is specific to the orchestra I’m conducting [the Danish National Symphony Orchestra]. And I’m coming back to conduct the San Francisco Symphony at the end of the month, and that will be Strauss’s Aus Italien, one of my favorites. [That program will also feature Igor Levit in Schumann’s Piano Concerto in A Minor.] You have a very good orchestra.

You’ll be spending a lot of time with the Danes. What are their strengths?

That was love at first sight. They aim for technical perfection, though like many orchestras of broadcast companies, they don’t look for a specific sound. But they do have a sound, which is very transparent, very light, and elegant.

What will you find in Florence?

They’ve always had a festival of new music, and special productions with rare operas. As you know, in Italy, we have a lot of financial and structural problems for art and culture, and I see a lot of my colleagues leaving Italy in order to have better possibilities abroad. 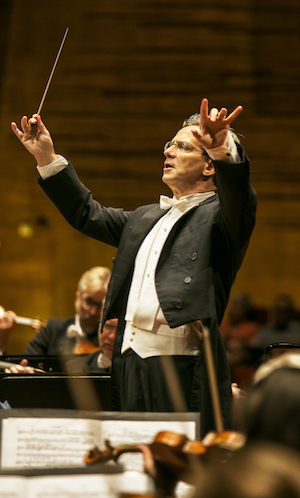 That’s it! I never had a position in Italy, and now that I have a little more experience — and I’m not that young any more [he’s 58] — I’d like to give back to my country what I’ve been doing.

You’re also giving back through your Luisi Academy for Music and Visual Arts, which I understand to be the beneficiary of your perfumery, which we’ll talk about in a moment.

That was my wife’s [photographer Barbara Luisi] idea. Since we have a house there, in Martina Franca [in Italy’s heel], she thought we [could] provide an opportunity for young artists to live there for a couple of weeks and perfect their skills.

Some members of the press here seem to have assumed you’d be taking over the musical directorship of the Met.

It was never an option. The Met’s general manager, Peter Gelb, called me when Maestro Levine got sick, and I canceled a lot of things in Europe in order to help the Met. I was proud, because they were key productions — the Ring, Don Giovanni, Berlioz’s Trojans — with great singers, and great producers. But the moment that Jimmy — Maestro Levine, I mean — got better, it was clear that he was the music director, and that was what I wanted, because I wished him in better health. Now they have decided on another way, but that’s fine, because I had already decided to come back to Europe.

You had no need to hold on to anything.

I never think it terms of career. I think rather in terms of “where do I feel well in a musical partnership?” I had 11 years at the Met, six as principal conductor, so it will always be family. And I don’t need more.

One journalist thought that New York audiences might demand a showy, extroverted personality, which that writer seemed to think you didn’t fit. 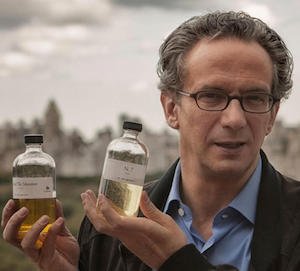 Maybe you’re just too charming, and maybe that should move us into talking about your perfumes.

I was always interested in them. I was fourteen when I bought my first bottle.

Guerlain Vétiver, which is one of my favorites still now.

And mine, it’s one of my four. Though today, I’m wearing Guerlain’s Eau de Fleurs de Cédrat.

I don’t know that one.

I have to get it from a friend in France. What are you wearing today?

So you wear other people’s scents sometimes. Aside from that first bottle of Vétiver, did other things in your life lead you to become a perfumer yourself?

Scent is not only perfume, but everything that is around. Scent has even been substantial for procreation.

Yes. In German, there’s an expression, “I can’t smell you,” which really means, “I don’t like you at all!” For me this was interesting, and I started to study little by little how perfumes are made. Perfumery was an art born in the 18th century, with the French, but the big step happened in the 1910s and ’20s, when synthetics were discovered.

I understand that you studied with a professional perfumer. Can you tell me his or her name?

No. But I learned some important basics, and a method which allows me to recognize different scents. It makes it easier for me to make an image of a perfume in my brain, before I start smelling or mixing.

Are there comparisons between that process and learning or making music?

Learning, no, but making, yes, especially in my profession as conductor. Because it’s a question of balance. Say I’m doing the Beethoven Third Symphony. I have a score, and I tell the musicians in the orchestra, you play softer, you play louder. When I’m creating a perfume, I start with some raw substances, and I can’t put the same amount of every substance in, otherwise it’s a mess. I have to put of rose a little bit more, of bergamot a little less, until I find the right balance.

Could we compare different composers to different scents?

So there’s a collective Guerlain, even though my Vétiver is different from my Cédrat? 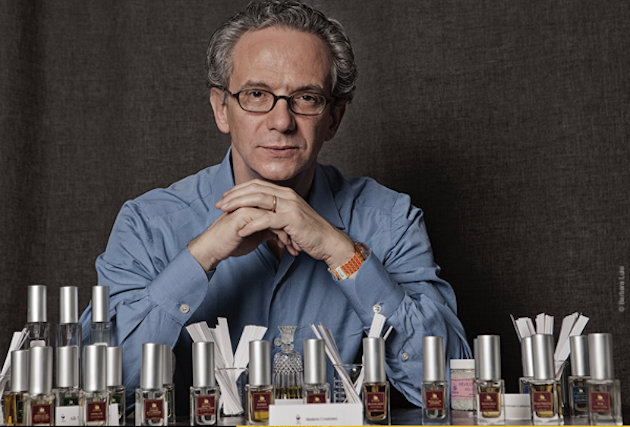 Is there considerable variety among your perfumes?

I offer some twenty different right now, at the Met Opera Shop and online. We go from the more feminine, with vanilla notes, and a little sweet, to the very, very dry, like my Vétiver. But in my mind, all perfumes are unisex. It’s a question of preferences.

In American stores, male and female are pretty strictly divided.

How can an online customer choose without sniffing?

Next month, I’ll be offering samples at my website, which will not be very expensive. If you like something, you can purchase a full bottle.

And I’ve heard you do custom fragrances.

I’ve done a scent for one important singer, but I can’t tell you who. I arrange a meeting, in order to smell together substances, and then I start to make trials and send them to the customer. The customer can tell me, I like this, but I can imagine more citrus or more sweet or bitter — until the customer is satisfied. But I have to believe in the perfume as well!

Did you create one for your wife Barbara?

An article in The New York Times said you’d gotten an inspiration from Central Park.

Not the scent of the park, but the idea of the scent. It’s called Matin à Central Park.

What does perfumery do for you that music can’t?

But I’m not the composer. I’m a reproducer.

So you compose the scents. Will you be making your perfumes available in Europe as well as keeping them at the Met’s shop and on the Web?

In a couple of Italian stores. And I’m working on a couple of Swiss stores, and airports and hotels in Vietnam.

Both you and I prioritize scents in our lives. What do they do for people in general?

They do life better!