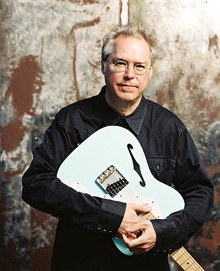 Over three decades, he’s refashioned tasty morsels of jazz, country, world, pop, and classical music, but Bill Frisell and his guitars have always flown far above pigeonholes. Raised in Denver and now resident in Seattle, Frisell spoke to SFCV earlier this month from the autumnal splendor of the Vermont Studio Center, where he and his wife, painter Carole d’Inverno, were pursuing their crafts for several weeks in the inspiring company of four dozen other artists.

I’m from Maine, so I know you’re up there at the right time of year.

What have you been working on?

Everything is focused on when I’ll play in San Francisco, at the Noe Valley Ministry [on Oct. 23 and 24]. I’m basically writing music for that group [the 858 Quartet]. And they’re all gonna meet me up here, later next week. We’re gonna rehearse for a couple days here, and then go directly to Noe Valley to play. And right after that, we’re gonna record, in Berkeley at Fantasy [for a Savoy Records release].

You’re used to performing and recording with oodles of ensembles in various configurations, but up there in Vermont it’s just you.

I’m the only musician here, so I’m in a painting studio — this big, empty white room with just a table — and I’ve got my guitar and a big pile of paper and I’m just writing, writing, writing. For the last 30 years, it’s got into this whirlwind of playing, playing, playing all the time. I’m not complaining, let me say that flat out. But everybody’s so happy to be here and have the time to work. So the atmosphere is really, really high.

Has anybody asked you to accompany their exhibitions?

Just yesterday, there was a painter who painted me. I’ve never done that: sat there for two hours with my hands in one position. And there was a sculptor who did a bust out of clay.

There could be some future cover art in that.

Anything special composing for the 858 Quartet?

It’s so much about the people. These are, like, my closest friends. Hank Roberts, the cello player, I’ve known for 35 years, and Eyvind [Kang, viola] I’ve known for 20 years, and Jenny [Scheinman, violin] for 15 years — ongoing, long friendships. So it’s kind of like having this amazing safety net for me. I can’t write like a Bartók string quartet; I just write whatever it is I write, and there’s a lot of trust involved. These particular musicians bring so much of themselves into it. I can write out the four parts, but it doesn’t have to be a finished product. It’s like, “Hank, why don’t you play the melody and Jenny play the bass part?” So I’m really counting on them for all that. When we play gigs, it’s always evolving, and it changes from night to night.

Nobody has ever really been able to categorize you, but what may catch some of your jazz fans’ attention is the semblance of a classical quartet here.

Except I’ve still got that wrench in the works, which is me playing electric guitar [chuckles]. I love just sticking myself into — like when I was a kid, when I was in high school playing clarinet in the school band — this is gonna sound terrible, but we would play pranks on the conductor. Me and my friends in the clarinet section, we’d play stuff backwards, shift our instruments around. And that sort of planted this seed of a little bit of mischief or subversion. I’m making it sound like it’s a joke or something, and I don’t mean to do that, but I love putting the guitar into all these different contexts.

Will you be using both acoustic and electric for this new work?

Mostly electric, but I’m into using acoustic, as well. And in that Noe Valley place ... we played there once before with this group, five or six years ago, and it’s such a nice-sounding room. You hardly need any amplification. It’s really sympathetic-sounding for what we’re doing.

I know. That’s where Louise and I got married, and we had a jazz trio there for the reception. I like what you say about the mischief. It seems with the classical composers whose works you’ve recorded, like Aaron Copland and Charles Ives, that you’ve selected those who have some fun in them.

Yeah, for sure. The thing about humor in music, I don’t see why there can’t be. It’s so important that that’s part of what the music is, ’cause that’s a natural human condition. It just doesn’t make sense to me to rule that part of it out. For me, the music reflects the whole spectrum — the pain and everything else, but also the humor. I don’t want to have the whole thing be all dark and sad.

Seems like there’s a connection for you between lightheartedness and a celebration of Americana.

Well, Ives and Copland, they took popular music and transformed it. And to me, that’s what jazz is too, with Sonny Rollins playing “I’m an Old Cowhand” [on the saxophonist’s 1957 album, Way Out West]. It’s not a joke, it’s the music in the air. I’m just trying to grab on to everything I know. I grew up in the ’50s, in Denver, kind of a Leave It to Beaver childhood, in a neighborhood with trees and bicycles, thinking about the future with rocket ships and hot rods and dinosaurs, and that kind of stuff. I grew up as rock ’n’ roll was forming, and it only seems natural that I’d use that stuff, and then look back at what led up to all that. I’m always doing that: trying to figure out where things came from. And Charles Ives: Look at the tunes that would float into and out of his music, including popular music from the early part of the 20th century.

And he was in the Northeast, where you find yourself right now.

I’m reminded of that while I’m here. Carole [his wife] and I actually drove up from New York, along the Hudson River, and there’s this whole thing with the Hudson River painters and Charles Ives being connected with all that. That sort of whole way of thinking about things. Being here sort of encourages all that sort of thinking, I guess.

You’re very well-placed, Bill. And I envy and congratulate you.

Thank you! I feel like I won the lottery or something. It was really good talking to you, and I hope to see you in Noe Valley.