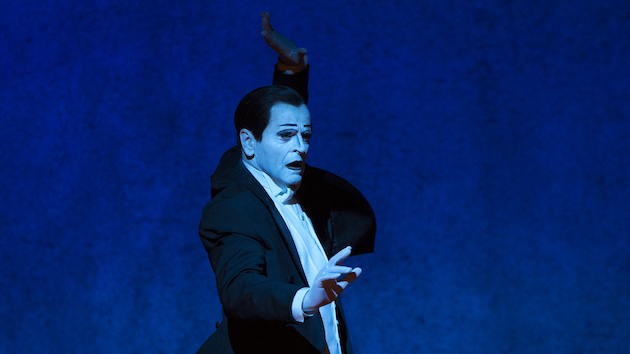 Known worldwide for the ability to catapult himself into the air, then hover as if gravity is an option, not a force, it’s fair to say that “hang time” was classical and contemporary ballet dancer-turned-actor Mikhail Baryshnikov’s domain. In countless works by Petipa, Ashton, Balanchine, Robbins, Twyla Tharp, and others; in performances with White Oak Dance Project, a collaborative operation that he co-founded with Mark Morris; on Broadway and in films that include The Turning Point, for which the Kirov Ballet-trained dancer won an Oscar nomination, touching ground when landing a jeté appeared to be a choice, not an obligation as it is for the rest of us mere mortals. 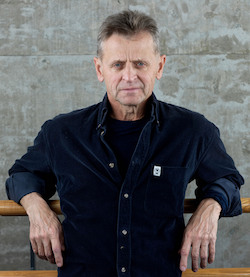 So it’s pleasingly circle-closing to discover that a similar technique is effective in a phone conversation about his work as an actor. One month before he returns to the Bay Area with the one-person theatrical work, Letter to a Man, directed by Robert Wilson, launching a question into the spin of Baryshnikov’s well-oiled interview machinery earns a response delivered without conscious thought, like choreography that has sunk deep enough to rely on muscle memory. His initial, brief answers are well-rehearsed — he’s done fewer performances of Giselle or Tharp’s Push Comes to Shove than interviews about the ballets — and ultimately, his comments are perfunctory, like a baseball player asked about winning games during a 162-game MLB season. But leave space — “hang time” during a phone call — and the results are more worthwhile.

If at first he downplays his part in the fourth collaborative work he’s done with the legendary director Wilson — “I’m just an instrument in Bob’s hands,” or performs a pushback for old-time’s sake, “It’s just like ballet,” he says, — waiting in silence brings out a description of his investigations: extensive research into the work’s time period, reading numerous books about Nijinsky, playing with his voice and the different intonations of his native and second languages, sharpening his ear to hear nuances in the score,  or focusing his eye to avoid stepping even one centimeter outside of a light’s warm spot. He speaks of working with Wilson, constantly testing to see if an edit or refinement can hone individual moments and tighten the work’s nonlinear, narrative clarity.

It is true, many of the tasks are like a dancer’s, but the answers make clear that Baryshnikov, at age 68, has landed upon a new platform; issuing performances that place greater emphasis on vocal tone and psychological motivation that determines the movements with subtle, less broad sweeping physicality than it did when he dressed in tights and expressed himself through pirouettes.

“This is not about playing a man who lost his mind,” he says, about Letter, the work based on the diaries of Polish-Russian dancer and choreographer Vaslav Nijinsky. “We’re trying to create internal sound, abstraction, movement. It’s not studio acting, not Lee Strasberg Method acting.” 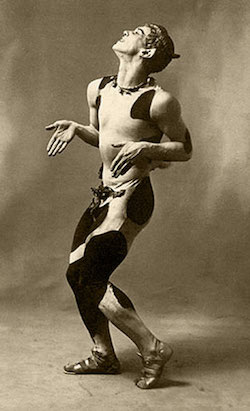 And Baryshnikov is not Nijinsky, who in 1919 was driven nearly mad by thoughts of war and God and lust, and filled his diaries with outrageous rants before being institutionalized. Just a decade earlier, rising to principal dancer status with Ballets Russes after being selected as a 19-year-old prodigy from the St. Petersburg’s Mariinsky Ballet by impresario Serge Diaghilev, Nijinsky was legendary. He held commanding roles in Petrushka, Spectre de la Rose, and more — and modernized ballet with his choreography in Afternoon of a Faun (1912) and Rite of Spring (1913).

He and Diaghilev were lovers, but when Nijinsky, while on tour, abruptly married a Hungarian woman, Romola de Pulszky, he was subsequently fired by Diaghilev. Two years later, with a 3-year-old daughter, he began to sink into the behavior that was eventually diagnosed as schizophrenia. Institutionalized for years and reclusive until his death in 1950, Nijinsky all but vanished from the public forum. The diaries were first published in 1936 and called by American Author Henry Miller “... a communication so naked, so desperate, that it breaks the mold.” The unedited version, recently released, forms the bedrock on which Wilson’s staging is constructed.

Letter opened at the Spoleto Festival July 8 and had its U.S. premiere Oct. 15 at Brooklyn Academy of Music (BAM). Commissioned by Spoleto Festival dei 2Mondi; BAM; Center for the Art of Performance at UCLA; and Cal Performances, University of California Berkeley; the 70-minute work performed In English and Russian with English supertitles comes to Zellerbach Hall Nov. 10–13.

The text is by Christian Dumais-Lvowski and is spoken by choreographer Lucinda Childs, Wilson, and Baryshnikov, along with music by Hal Willner and a soundtrack that includes Arvo Pärt, Tom Waits, Bessie Smith, and more, and lighting design by A.J. Weissbard – and that’s merely the tip of the iceberg-size crew involved. 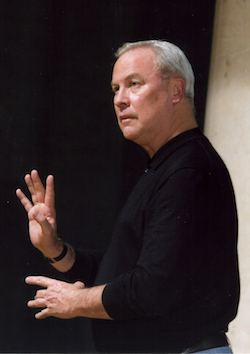 “It’s a big group,” says Baryshnikov. “They all have input: there’s a lighting person, Lucinda, Bob, a person like a dance captain who watches every show and notes the entrances I missed or where I wasn’t in the right place. There’s no allowing for one foot to the left or to the right because of the light. You have to be in precisely the right spot.”

Adjusting to different stage sizes is old hat for Baryshnikov, but still requires diligence and flexibility within a seemingly tight structure. Baryshnikov says his gestures will enlarge at Zellerbach, but thanks to technology, stronger vocal projection won’t be necessary. “It’s almost like an opera. I use different volumes of the voice from whispering to screaming. I do what my instrument allows.”

Variable textures, he suggests, are created in the score by his recorded answers to Wilson’s voice. “I’m answering in two languages. There are the different phonetics of Russian and English: my mother tongue is one thing, and with English, it is my accent [that you hear].”

The process of creation with Wilson during their fourth collaboration (Cal Performances hosted Wilson’s production of The Old Woman, starring Mikhail Baryshnikov and Willem Dafoe in the 2014–15 season) allows for shortcuts. “I understand what he prefers,” says Baryshnikov. “This is not psychological theater, it’s very much presentational. It’s a white face, masked, exaggerated make up. It’s eccentric, German expressionist, silent movie. That means I’m not portraying Nijinsky as a person. It’s a work about his descent into madness, not a study on madness. It is a fantasy about ‘What if?’” 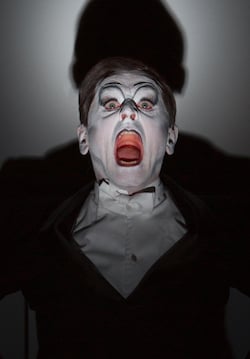 Baryshnikov says that people ask Wilson, “Why whiteface?” Wilson’s answer? “He says, ‘Because I can see it better.’” During the development of the work, there was tremendous freedom to play within the given aesthetics. In general, Baryshnikov says that Wilson directed him to “play lighter,” to hit dark and difficult moments with gentle strokes, or mark comedy with somber, but not strident tones to avoid cliche. “He’s like a painter: here lighter, there louder. I’m alone onstage, but there are Bob and Lucinda’s voices — and my own.”

Working with Childs, specific spacing and body language during improvisational moments gets heavy scrutiny — more for awareness than to restrict the boundaries. Applied to the work of a director known for intense specificity, the choices made must always serve within limits. “Certain things are specifically set. You have to nail those things all the time. Other things you can differentiate. You actually take chances. For example, you might under or over dance it. Then you adjust. You throw yourself in, but you try to be disciplined. You have tasks in front of you about what you want to achieve.”

Asked who he might cast, if he were to step down from his role in Letter, he at first says, “Don’t ask me; ask Bob.” Allowed hang time, he says, “I’d never thought about that ... but that might be good.” And encouraged to drift into the advice or coaching he might offer a successor, Baryshnikov is nearly loquacious. “Each person should go from the beginning and make it his own. He should follow the instruction of the director, learn the text, record things, and go on stage. It’s like a dance. All my work made by Twyla and Morris and others is now done by other dancers. The work is not made for you, it’s made on you. What lives on is the structure of the piece. Maybe ten years from now, someone else will do this part.”

If that day comes, it is not unlikely that Baryshnikov could find himself in the role of Diaghilev, presenting new work inspired by Letter. In 2005, he founded the Baryshnikov Arts Center in New York. BAC supports artists in all stages of development, from students just beginning to perform their work to seasoned actors, musicians, dancers, photographers, visual artists, choreographers, directors, and composers. “We get lots of applications, as you can imagine,” he says. “It’s truly satisfying to be a fly on the wall and see people work, have space, and dream.”