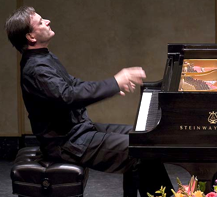 Stephen Hough is often called a “pianist’s pianist.” While that’s an apt description, as always there's much more to the man than just the music. On the music side, he is a composer and a visiting professor. But he’s also a writer, about both music and other subjects, especially theology. He’s a MacArthur Fellow. And he’s a blogger who’s well worth bookmarking, for his engaging writing style as well as for the wide range of subjects he covers (see his blog).

The British-born Australian talks about his interests including visits to the Bay Area, which he always enjoys visiting.

Are there aspects of these pieces that people might not be aware of that could bring added meaning to their enjoyment of the performance? 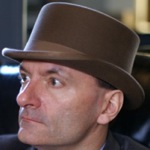 The second half is all-Chopin in his anniversary year — two masterpieces from the end of his creative life. The first half places three composers side by side who earned their livings as organists. Bach and Fauré are worlds apart in their aesthetic, but in Franck we see the two worlds come together: the forms of Bach with the chromatic, elusive harmony of Fauré.

What do looking forward to doing in San Francisco, in addition to the music?

I may pay a visit to Mrs. Dewson’s Hats shop, I’ll wander around the always fascinating streets of one of my favorite cities, and I’ll wait for a surprise or two along the way!

You’ve written in your blog about why you hadn’t wanted to learn Tchaikovsky’s First Piano Concerto, but now your new CD, The Complete Works for Piano and Orchestra by Tchaikovsky, is garnering glowing reviews. What was the experience of working on these pieces like for you?

Stephen Hough warms up for a recording
session with a little Moszkowski:


I love Tchaikovsky — the man, the music. I find him one of the most open-hearted composers; he isn’t afraid to let you into his inner world, even if it’s not always the tidiest place. I also love the way you have to balance his longing for the innocence of childhood with the most adult of expressive yearnings. This conflict is there in all of us, but in Tchaikovsky it’s blatant — it’s hanging in the window.

In addition to performing, you’re a composer and writer. But is there some other career that, in the back of your mind, you just might have wanted to undertake?

The only other thing I almost did was to try the Catholic priesthood.

Your Web site mentions your “daytime interest” in many things, including hats and pudding. First, what draws you to hats?

I really don’t know. It could be that a hat makes a statement; it’s my way to express nonconformity. Until the 1960s, men could not walk on the streets with a bare head, but to wear a bowler now is fairly unusual. Maybe it’s a (harmless) form of exhibitionism!

And what is your favorite type of pudding?

Sticky English ones, with a huge dollop of yellow custard — treacle, toffee, chocolate, Christmas. I also like pies — lemon or key lime, as long as the crust is crunchy. And croissants, and brownies ... I’ll turn very little away.

You’ve said in an interview that most people won’t know that you start the day with chocolate. Milk or dark?

Usually milk, although I like it with a slightly higher cocoa content than a drugstore-stocked brand. Then perhaps some dark later in the day.

What are you listening to on your iPod these days?

When I buy an iPod I’ll be able to answer that question!