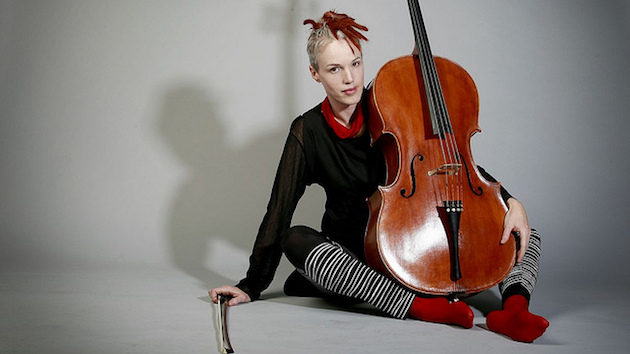 Maybe it’s cellist Zoë Keating‘s mandate to smash definitions of time and disrupt boundaries that previously delineated the roles and rights of artists in society.

How else to explain her concise answers to questions about copyright laws, universal health care, and electronic music software during a wide-ranging interview held between sound checks just prior to a show in New York City? Isn’t the sacred hour before a world-class solo musician takes center stage supposed to be a time for meditation, ritual, or at least a bite to eat? 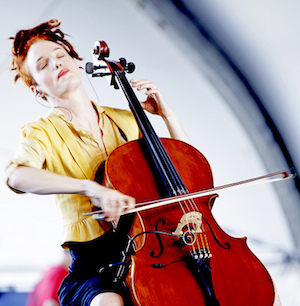 And when the Canadian-born, San Francisco-based Keating assumes her position onstage (as she will at the Green Center in Sonoma on Dec. 11) with a cello and a laptop she controls with her foot, the time warp continues. Layered loops of prerecorded tracks she has created bring the human voice-range frequency of a cello into polydimensionality that encompasses past, present, and future actions. It’s as if Keating plays on the lips of now: uttering forward thinking ideas with the cello she holds in her embrace. The instant the real time musical expressions are “spoken,” they become history. The loops controlled by her one-footed tap dance delve deeper, in some ways they are her haunted memories, cherished remembrances, antiquated understandings, adopted traditions, and ghosts.

It is known in the music industry that Keating began playing cello at age 8; completed professional, classical studies at the Eastman School of Music in high school, and received scholarship offers, but chose instead to take up liberal studies at Sarah Lawrence College. There, she grew versed in improvisation, composition, electronic-music, recording, and production before moving in 1994 to the Bay Area. A job introduced her to software coding and work as an information architect, before the dot-com bust in the late 1990s set her free to pursue the moonlighting she’d been doing as a cellist. She played for four years with the cello-based Rasputina and while living in a San Francisco warehouse with other artists, met her late husband, Jeffrey Rusch, a photographer and graphic designer. Together, they had a son, Alex. Rusch was diagnosed with stage IV nonsmoker’s lung cancer in 2014 and died in February 2015.

The primary reason that more is known about Keating, 44, than some artists of her generation is likely the active social media presence she has maintained during the last 10 years. Operating without a record label, the life she leads as an independent musician thrust her onto the national stage after she wrote op-ed articles and blogged about Spotify and YouTube to protest corporate exploitation of intellectual property rights and fair compensation for musicians. A second public push happened when Rusch was initially denied insurance coverage for necessary cancer treatments he received. Keating fought back and eventually won a battle that she chronicled on social media. Becoming a single mother added a fourth dimension to her musician/arts and health-care advocate profile.

Stretching beyond what seems possible, her layered music has caused some reviewers to dub her a “one-woman orchestra.” In an interview, she encourages a writer to come up with a new moniker. Conversationalist cellist? Single-person conclave? Few words adequately describe the infinite connections that play out like children engaged in a mysterious tag-plus-folk-dance game in her otherworldly compositions. Some works are the sonic equivalent of spinning like mad, falling to the ground, feeling your heartbeat echoed by the earth, and slowly rising to reach up past the moon to pluck a star out of a night sky. She has composed music for ballet, theater, film, radio, and television, including the A&E series The Returned and Manhattan. Among her current projects is a new CD she expects to release in Spring 2017.

The obvious question, therefore, is, how does she fit it all in?

“All the self-promotion I used to do has taken a real back burner,” she says. “I used to spend time in the studio and onstage trying to figure out how I could hack my way in back doors to gain more access, visibility. I’ve also had to let my social media presence slide.”

Keating says she retreated last year to make better use of her time. “I had to make music, rather than tweet.” The line in the sand shifted, but she has no regrets about the years in which she often engaged with her fans online. “Although it’s hard to say what works and what doesn’t, the activity I did in the world early on had an effect, for sure. What I’m doing now is the digital equivalent of resting on my laurels.”

“Resting” hardly seems accurate, because she still handles her own “administrivia,” the term she uses for answering emails, signing documents, doing promotions, interviews, and more. “I try to spend time in the studio every day. Even an hour is like therapy. I don’t have the internet on and I just do that hour. Getting lost in a piece of music—there’s nothing like it.”

Expectedly, considering that she’s a boundary smasher, Keating would like for everyone in the audience to get lost in her music. “Music for me is something I can see: it’s full of motion, three-dimensional. It would be so great to have the audience feel like I do.”

To achieve that, she’d like to add visual and lighting elements to her performances, maybe collaborate with a painter or digital artist who’d create a visual palette while she plays. New technologies might also allow the loops to be tracked with more fluidity than the MIDI software she currently uses. “There are programs out there, but they require programmer-level skill to use,” she says, bemoaning the time crunch of single parenting and touring that prevents her from mastering them. “Right now, I have to set up the tracks in advance,” she says. “Once I record a loop, I don’t have flexibility to change the tempo. I try to be as clever as I can to give the appearance of spontaneity. It’s a never-ending quest.” 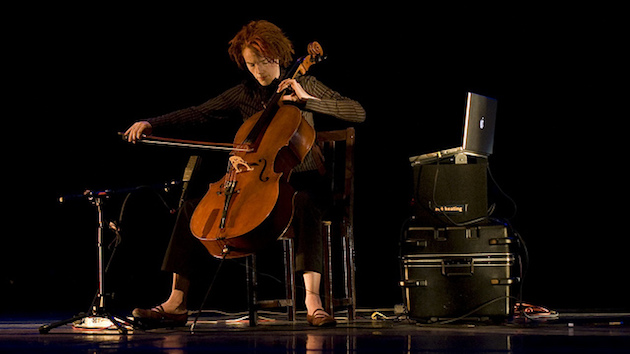 Sometimes, the software programs crash or slip out of sync due to delayed latency (data travel time). A custom-designed program that does allow her to create layers on the fly is buggy enough that it usually falters one time during each show. “I can hide that from the audience. I kill it and restart it with my foot,” she says.

Appreciating the control she has over the technology still leaves her feeling “boxed in” and so it’s likely she’ll keep pushing against the limitations. The same is true of the copyright issues: as a trustee of the World Economic Forum’s Future of the Digital Economy and Society Initiative, Keating says she’ll continue to “stand up for individual creators” and things that might oppose the business interests of large corporate entities. “YouTube users can post content without having approval. The law protects them from copyright infringement. I’m saying, ‘Can we think about that in advance?’ If there’s nobody speaking up for the little guy, who is there? It’s a big role.”

Health care is another hurdle. “It confuses me why it’s connected to your job. In the future, it’s going to be very rare to work for a company with benefits. People are going to have multiple jobs. They’re not going to work for one company. It’s going to be single-payer care. For efficiency, the complicated system we have right now is ridiculous. It needs to be less complex.”

If anything is simple in Keating’s life, it’s the source of her “stand-up-for-the-little-guy” impulse. At age 12, visiting the public school of a friend who played with Keating in the regional youth orchestra she credits with being pivotal in her training, she had a startling realization. “They had a string program, you could learn Greek. Her school was like a college campus. My school was a public school too, but it didn’t have any of those things. When I was a senior in high school I had three consecutive study halls because there were no classes left for me to take. I became aware that there were people who had things and people who didn’t have things. It seemed kind of arbitrary. It didn’t seem fair.”

“Egalitarian artist” becomes a possible way to define Keating. As if to stamp approval, she says that she’s agreed to serve on the board of The Open String, a volunteer-based nonprofit that provides quality instruments for after school programs and students in underserved communities. “Sometimes, a poor instrument can hold a student back because they can’t get a good sound out of it,” she says.

And sometimes, a kid with a good cello grows up to make the world a better place for musicians, her family, and other people.