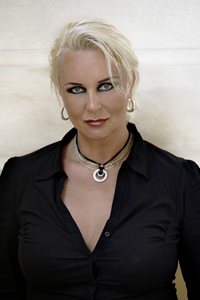 Theorin sang her first Turandot in 2005, and debuted as Isolde in 2008. Although her Turandot has yet to be commercially recorded in any format — perhaps San Francisco Opera will fill the void — the recently released DVD of her sensational Elektra, taped at her role debut at the Salzburg Festival in 2010, gives some indication of the dramatic power of her Turandot.

Speaking just four days before stepping onto the stage of the War Memorial Opera House as the defiant ice princess who ultimately melts at the sorely obsessed Calaf’s declarations of love, Theorin reveals as much about the character as about herself.

Did I read in your bio that you go to the gym whenever possible?

I try to do an hour a day. It’s not always a gym, but I try to do something. Usually it’s power walking. That’s the easiest way when you travel a lot. I walk a lot. You know, I’m not young anymore. I’m not old, but I’m not that young anymore. I could also feel, even if my muscles feel positive working with me, that I shouldn’t overdo things. Then, I stop doing something. That’s life, I suppose [laughs].

I just watched parts of your Elektra DVD. It’s so compelling.

Oh, thank you. I haven’t seen it. I never look at myself. But one day, when I retire, I hope I will.

If I were to finally look at myself after so many years, I’m not sure I’d want to see myself dressed as frightfully as you were as Elektra.

[Laughs] You know, that production started with me looking more like I look these days. The hair was very long, with waves and everything. I looked like I could have done every Italian part, or Carmen, or whatever. Then, just before the dress rehearsal, it got totally changed. I didn’t look as nice as was planned from the beginning.

I love to be onstage — I really do. I love to have that space to create, in the moment.

With a lower voice, you would have looked fine for a madwoman like Azucena.

It was really right for the part, and really right for the production itself. I was really happy. I was doing these “before and after” photos, as they usually do with people looking a bit tired. Then they redo them and they have a beautiful picture. I was coming to the theater, fully made up as a private person. Then I got the “after” photo, when they had made me up. It looked horrible.

One of the things I really appreciated in DVD close-up was when you would slightly curl your lip or make a wry look, and I’d know something was brewing.

I love to be onstage — I really do. What happens can be very much what’s given to me from my colleagues on that day. I love to have that space to create, in the moment. In that Elektra production, it was possible. Usually it is. As long as you stay in the geographics, there’s a lot of space to create, on a daily basis, what happens here and now.

You speak of the space to create. In Turandot, your pivotal character isn’t onstage very much. When she enters, she basically goes, “Watch out!” Everyone in the audience is waiting for you to build to those high Cs. Does the opera allow you as much space to create as you’d like?

I haven’t read the letters. They are people who know a lot more about that than I do. But as for the character herself, I have done different kinds of stagings, some with her more human. I try to retain that humanity, because she is sort of trapped in this history, and she is mainly scared, I think. That’s why she’s so edgy. She doesn’t want to turn out to be in the same situation as her ancestor Lou-Ling was.

All the places where I can catch the possibility to make her vulnerable, or where you can see that she has a heart somewhere beyond all this ice and coldness, I try to bring out. In the Alfano ending [by the composer who completed the score], there’s a lot of space to show her humanity.

As strong as your voice can be, and as much as it can convey madness, terror, and anger, you can also sweeten it. That’s not always a given for a dramatic soprano, but it certainly seems like an asset for an ice princess who melts in the end. How difficult is it, after coming on so strong with all barrels firing, to melt at the end of the opera?

It’s all about technique and discipline. This sounds very dry. But for me it is like, if you go onstage and start to think technique ... Of course, there are evenings when, depending upon your form that day, you have to go in holding the major thought of doing it technically right and making it through. It’s never easy to sing, and no one says it’s easy to sing.

There are shorter parts, and there are longer parts. But all parts have difficulties. The difficulties can be in different places for different singers. But when I am standing there — I don’t know how to say it — it’s too late to think too much about how to do things. You just have to trust that you can do it, and you just do it. I do it out from the feeling I have, and usually it works. [Laughs]

I try to retain the sweet part of my voice. I know when I just began singing (I started rather late), I came with the natural way of singing that I had. People got amazed that I could do a bigger and bigger sound. Of course, I loved that, as well. So that was sort of what I gave.

I wanted to do more of it and try new things. Then I found out that there is really no excitement in doing big sounds in and of themselves, neither for me nor for the listeners. So I went down to singing as much piano as I possibly could. My voice is flexible, and I try to keep it there.

Once, a person came to me and said, “Well, the differences between your piano and forte are very, very big. Maybe you should be a bit careful about that.”

I thought, No, I won’t do that, because that’s probably one of my weak sides, but it can also be my strongest side. I’ve since noticed over the years that the soft sounds carry as well in the big houses, so I keep them. Now I don’t think about it; I just do it, because it’s in the scores.

You and your fellow Swedish Brünnhilde, Nina Stemme, were both born in 1963. You both had late starts, she before she had her three children, you after you had your three. It’s amazing to me how many women these days are singing at a peak in their late 40s and into their 50s. It’s very exciting.

I hadn’t thought about age much before, because I’d always been on my way. “I want to go further, I want to go further” has been the only thing in my mind, and I never thought of age or where I am. But a very good friend of mine, who went to the university with me when I was very green and new, asked me just some months ago how my voice was, and if I could feel that it was changing.

I have to say for me – I don’t know if people agree — my own personal feeling is that I’m still developing. I still haven’t reached my peak. I’m really happy about that.

I had never thought of it. I have to say for me — I don’t know if people agree — my own personal feeling is that I’m still developing. I still haven’t reached my peak. I’m really happy about that.

What is it like being in San Francisco for the first time and working on this production?

I haven’t seen much of the city yet. I arrived Monday evening, Aug. 29, and we started to rehearse the next day. My first day off was Sept 5. I’m looking forward to going out and having a walk, a bit longer than from Hayes Street to the Opera House, which is just around the corner. I’m really, really happy and excited to be on this side of the States for the first time.

[Music Director and Conductor Nicola] Luisotti is so passionate about what he’s doing; it’s such an honor to work with him and be here. I enjoy it very much.

I enjoy this production, as well. I’ve seen the costumes once onstage, and it’s like a cartoon, in a way. I don’t know the English words to say it, but it’s like opening one of these gifts to children with all the bright basic colors to paint something: the green, the blue, the yellow, and the red. It’s very simple in a way, like a cartoon, and it’s very beautiful to look at.

Where will you go on your walk?

I heard that the Labor Day sales are on, so I will start going to Union Square and see what happens. I have also planned some days to do the tourist bit — Alcatraz and all that — after the opening. But today, I close myself from socializing and just go out walking and prepare myself for the dress rehearsal tomorrow.

I think you gave us a little bit of hint about today when you said “close myself.” Did you mean “close,” or did you really mean “clothes”? When we meet, I look forward to seeing your new shoes.

My luggage is so heavy that if I buy something, I have to throw away something.

You can always ship it home.

You know, I started doing that. It’s so bad!