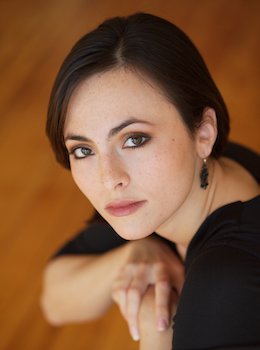 Mezzo-soprano Isabel Leonard is one of opera’s fast-rising stars. In performances of Rossini heroines, Handel trouser roles, and contemporary operas such as Thomas Adès The Tempest — audiences around the world saw her as Miranda in the Metropolitan Opera’s HD broadcast of that work earlier this season — the New York native is consistently praised for her vocal brilliance and dramatic insight. Leonard, who made her San Francisco Performances debut in 2008, comes to the S.F. Conservatory of Music for a recital Sunday afternoon; accompanied by pianist Vlad Iftinca, she’ll sing Spanish and English music by Falla, Granados, Mompou, Montsalvatge, Ives, Rorem, and Higdon. Speaking by phone from her New York home, where she lives with her 2-year-old son, she discussed the program, her upcoming San Francisco Opera debut, and her future goals.

You seem to have one of the busiest schedules of any singer in the business today. How are you managing it — especially with a 2-year-old?

With great difficulty! It’s constant planning, especially when I’m in New York. I have a nanny who comes in from 9 to 5 during the week, and then I’m always putting together the extra hours from 5 into the evening, depending on if I have a late rehearsal or a lesson. The weekend is defined by who can watch my son. I’ve just this fall put together a plan with my mother, who lives in New York, so my son visits her for one or two nights over the weekend. I’ve been very lucky that the people who help me are very good at helping me. But there is a constant level of organization.

You’re coming back to San Francisco in recital. It looks like a great program — how did you organize it?

I wanted to put together a recital of music that, as every song came up, I never had a doubt in my mind that I wanted to sing it. I wanted all of the texts to follow the general story that I wanted to tell. The stories are quite similar for the first half, which is all Spanish rep, and the second half, which is all English. It may be a cliche, but it’s the typical love and life story — you fall in love, you may or may not have children, your relationship may or may not fall apart, and then at some point you’re reborn from wherever you have been. Both have a direction and a path. I read the texts first for all the pieces — I generally do that, because for me that’s the most important thing — and once I like the text, I listen to the music. I had tons of music, and I sifted through it over and over.

I didn’t want them all to have the same sentiment; each one had to move the sentiment along. The second set of Spanish songs, for example, are all very sad, but they all tell the next step: Gracia mia tells about this love, and that goes into the Oración de las madres, the prayer of mothers asking for their sons not to be taken as soldiers. From that I go to Solo las flores sobre ti, which is grieving over a grave, to the final one, Olas gigantes, which is asking to be taken away by the waves in the ocean — you just can’t stand the grief anymore. So that was my goal, to make some kind of a story, and to make sure each song meant something to me so I could be honest while I was singing it.

That was my goal, to make some kind of a story, and to make sure each song meant something to me so I could be honest while I was singing it.

Critics often describe your affinity for drama and the deep feeling in your singing. How have you developed that?

I try not to develop it, on purpose. I try not to give myself a goal. You never know after singing a piece five or 20 times what might come up and where the music might take you. With these pieces, I just keep delving into the words; in rehearsals, in repeating the music, the words keep taking on different colors. They enter through your brain and exit your mouth in a different way, because they’re no longer words on a page. So in general, I try not to tell myself “You need to get to this point dramatically.” I just say, “Let’s go through the words and see what happens.”

Is that true for opera as well as recitals?

I would say it’s even harder in recitals, because in opera, you have a character that you’re coming to the work with, and you have a world that’s created for you, with sets and designs and a director. For me, a lot of the visual world really informs where my character is going. In recital, there’s a little more of a dark space around you when you first start; I’d say the beginning stages are very black and white. It’s the pianist and me and the music, and I’m very much in the actual paper of the music. As I’m able to step away from that and speak the words as if they were my own, more images come to mind … then everything becomes Technicolor!

It sounds like you enjoy the recital process. There’s been a lot of discussion in recent years about the relevance of recitals and whether the public is really supporting them. What’s your view?

I think they’re important, in that you’re allowed to put together a program of music that you love — music that comes from you and that you want to communicate. In some ways, it’s a bit of a description of who you are. Naturally, as human beings, we try to go for the path of least resistance, but in the professional world, we’re trained not to; we’re trained to try everything, and with that in mind, you pick a variety of pieces that challenge you in some way, theatrically or musically. In recital, though, you’re creating something that’s tailor-made for you. I think that’s lovely.

To me, if you like the music, it doesn’t matter if it’s under the umbrella of “classical” music.

You’ll be making your San Francisco Opera debut this fall, as Rosina in The Barber of Seville. You’ve sung this role several times — both in English and Italian.

Yes, and the first time I sang it I was six months pregnant. I did it in Denver, and I had no air, because of the altitude and because I was pregnant. I remember going through that production and thinking It’ll never be this hard again! I did one in Italian after that, and I recently did it in English, and I did it in Vienna in Italian. It’s a fantastic opera. I love The Barber of Seville, and I love Cenerentola. I’d like to do them both more often. With Barber, even the text is funny; the recitatives between Rosina and Bartolo are hysterical. It’s just an open book for good theater, if you have a director who gets all the beats right and the comedy of it. I’ve had nothing but fun in these pieces.

Are there past singers who are models for you?

I don’t have one particular singer. I really do listen to a variety of people. If I’m going for older recordings, I love to listen to Renata Tebaldi or Teresa Berganza. I like them a lot.

I wanted to ask about HD broadcasts, particularly your role as Miranda in the Met production of Thomas Adès’ The Tempest. Can you talk about that production, the broadcast, and what it was like to work with the composer?

Thomas, first of all, is a very nice man, and we had a lovely time working with him. Gosh, if I’d written a piece of music and the singers who were performing it made a million mistakes at every rehearsal, I would have gone crazy! But he was so patient with us. He’d kind of get this wide-eyed look when we’d go a little bit off, like Well, we’ll make it through. [laughs] But we had a great time with him. Learning the music was a challenge — probably the hardest piece of music I’ve ever learned. But at the end I think we all felt we’d come through it together.

How does singing for HD broadcast affect your performance?

The singing itself doesn’t change. The quality you’re trying to produce stays the same, especially at the Met. It would be different if we were performing these pieces in a small house and then they were to bring a camera in; in the Met there is a sense of grandeur in the gestures that needs to be achieved in order for the audience to read what’s going on. But things are changing — I’d say that reality has entered the opera world. There’s a desire for realism — “let’s not stand here and do these big operatic gestures, let’s actually talk to each other where our characters should be.” The more we do of that, the less invasive the cameras seem to be. What they remind you of is that somebody can see you up close, and if you’re not comfortable with that, it can be a little stressful. For me, it’s exciting — people can see you up close, and you’re forced not only to stay with your character, but to express everything you need to express as honestly as you possibly can. Up close, one fake gesture is magnified a million times. I like it — it’s like putting a zoom lens on the opera. It’s high energy, and you’re on every second, and that’s great.

It sounds like you’re saying it’s made you a better artist, in some ways.

I think that’s entirely possible. The fact that you have to focus like that is a good thing. There are times in any theater, if you’re having a rough night, when you turn upstage and just check out for a minute, conserve some energy. With HD, you really can’t do that. You completely delve into the character because you have to.

What roles are you preparing now, what do you have coming up, and what do you want to be singing a few years down the road?

Right now I’m working on Blanche in Dialogues of the Carmelites. I’m singing it for the first time in May at the Met. Almost everything I’ve done this year has been new. Every time I pick up a new score I think [sighs] Here we go! I just got back from Toronto, having sung Sesto for the first time. My pianist visited me twice there so we could run this recital, and then we did two recitals the week I got back. My head’s sort of spinning.

But in terms of other rep, I’d love to sing Cenerentola again. I’d love to sing La Périchole again. I’d also love to get into the classical musical theater rep: Carousel or West Side Story. These are great pieces, and they require good singing. To me, if you like the music, it doesn’t matter if it’s under the umbrella of “classical” music — there shouldn’t be such a harsh line between those worlds. And I want to get more involved with new works, to get back to the tradition of singers working in tandem with composers. Beyond that, well, I’m the worst person to think about that. My son’s just started preschool, and I just think as long as we’re healthy, happy, and I’m still singing, everything will be fine.