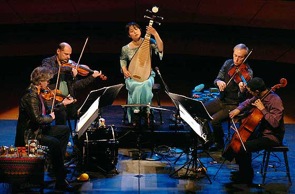 Back in 2006, Kronos founder and violinist David Harrington was advised by Wu Man — a virtuoso on the traditional Chinese pipa and one of the Quartet’s favorite collaborators — to pay a visit to Yin Yu Tang, a 250-year-old Chinese residence which had been imported and reassembled at the Peabody Essex Museum in Massachusetts. In that venerable building, Wu and Harrington had no problem finding inspiration for another collaboration. “There was an accretion of layers, just looking at the walls and seeing the different objects and posters, and thinking about the sounds,” the violinist later recalled. “If walls had ears, those walls had heard a lot.”

Now, after a world premiere at Stanford early in 2010 and subsequent performances of the work inspired by Yin Yu Tang, A Chinese Home (with arrangements credited to Jacob Garchik and Jack Body) is ready for an appearance at the Yerba Buena Center for the Arts, where Wu and the Quartet will perform it on June 3 and 4. As Harrington prepares to chat with SFCV about the premiere, the walls of Kronos’ San Francisco headquarters, which have also heard a lot, are hearing him delight in an Otamatone, a toy which sounds like an amalgamation of a theremin, a stylophone, and a violin, and will be dramatically deployed in the last of A Chinese Home’s four, historically arranged sections.

You seem to have a lot of toys to play with here.

I had a dream about how this piece should end. It seemed to me it needed to take tradition and bring it to the present. So Wu Man had to learn to play a sampling instrument, an electronic pipa [created by Kronos instrument maker Walter Kitundu]. After Wu Man, these toys basically kind of take over the entire stage. Chen Shi-Zheng [the piece’s director and visual designer] figured out a way to make that happen. [Backdrop projections of Yin Yu Tang are part of the design.]

How did you and Wu Man go about creating the piece, after your visits to Yin Yu Tang?

I said, let’s not have a composer, let’s curate. For Part I, Return, listening to many different elements of rural Chinese music, from as many sources as I could locate, was fascinating for me. We use some of the rural instruments.

The Cusp of Magic

The Quartet learned how to play them?

Not that we’re authorities, but it’s interesting that the process of being musicians in 2011 allows us access to instruments and colors and forms of thinking about being instrumentalists, so that we can participate in this.

Is that partly thanks to YouTube? What Chinese instruments will you be using for this?

YouTube is amazing! ... The piece starts with many overdubs of lusheng [assembled bamboo pipes fitted with reeds], and we all come on playing lushengs live. It’s a fascinating sound. There’s various gongs. And Hank [Dutt] uses a bow that’s used on a rural instrument, a stick with horsehair, he uses it on his viola to create an entirely different sound. Then, for Namu Amida, a song [of religious praise] from the 9th century, there’s a Buddha box, [an electronic loop player] which is used in traditional ceremonies. It turns out that various forms of that song are part of the computer chip which is placed in the Buddha boxes, and you can activate various performances of that song, some of them cheesy.

In the multifaceted, multiphrenic world of Kronos, does this piece hold a special place?

Yes, because it brings together so many of my personal passions, including my love for musical toys [in Part IV, Made In China], the exploration of various forms of folk music [Part I, Return], and the influence of American culture [Part II, Shanghai], on Chinese film music, when what was brought in as “American” was so interesting. Then there’s the formulaic official music of the Cultural Revolution [Part III, The East Is Red], some of which is absolutely beautiful. ... I find it incredibly fascinating, the diversity of sounds. One of the things I learned in my investigations is that the entire country of China is in one time zone, though I think it’s wider than the United States. Its western area is much more Central Asian, the whole language and religion are very, very different.

So how is this all going to stay together? 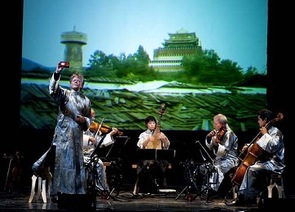 How has the piece been received so far?

People who actually grew up in China during the Cultural Revolution [roughly 1966-1976] have told us that this piece, the whole piece, feels exactly like it felt to live in that time, in China, with the various layers of experience. There are these layers of earlier music, nothing ever gets lost, things get submerged for a while, and then they resurface. And I take that as the biggest compliment, because that’s exactly what I was hoping to do: to bring the audience what, at least in my imagination, it must have been like. Wu Man and Chen Shi-Zheng became incredible advisors on this process, contributing their expertise and knowledge.

Are you excited about bringing the piece back home to San Francisco?

I’m really looking forward to the environment at the Yerba Buena Center. There’s an exhibit there now by a man who’s assembled his mother’s and grandmother’s collection of objects. [Song Dong’s Dad and Mom, Don’t Worry About Us, We Are All Well, showcasing family artifacts from five decades, in keeping with the Chinese concept of wu jin qi yong, meaning “waste not.”]

So the exhibit resonates with Yin Yu Tang.

It’s an accretion of layers, showing how where we are right at this instant is just an accumulation of these layers of experience and cultural information.

What else will be on your concert program?

It will start with Ghost Opera [by Chinese composer Tan Dun, and a part of Kronos’s repertoire since 1994]. Then, as the stage is being set for A Chinese Home, there will be an extensive prerecorded sonic environment, with many different aspects of China, from ritualistic sounds to construction work and city sounds ... and music from 19th-century Edison cylinders. There’s a fantastic Islamic call to prayer, from western China, and some Tibetan music — there are subtexts going on.

Where do you want A Chinese Home to go?

I forgot to tell you that we did it in Australia, and that we’re involved in editing some elements for DVD. I would love for this piece to play in China; there’s talk of it going to Taiwan, Singapore, and maybe Hong Kong, but it should be in Shanghai and Beijing.

You’ve told me that your granddaughter, Emily, has been studying Mandarin in elementary school here, and that a lot of her friends speak Mandarin or Cantonese at home. Will Emily see this show, and have you told her how it ends?

She’s gonna come, but it’s gonna be a total surprise. [He chuckles.] I can’t wait.