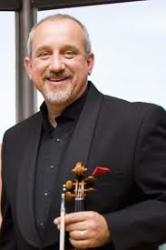 Like the fiddling figure in Marc Chagall’s painting of a hundred years ago, Jeremy Cohen likes to wield his instrument far above the confines of quotidian convention. Classically trained on violin by Anne Crowden and Itzhak Perlman, Cohen has also striven to follow the latter’s guidance toward “the joy of being able to fly with a musical instrument in my hand”. That goal took him on through show music, Western swing, blues, rock, and tango, all of which he now shares with the like-minded members of his Quartet San Francisco, who’ve showcased their delightful eclecticism in collaborative performance and on recordings. Cohen rushed down from his home on Oakland’s Broadway Terrace for lunch with me at Oliveto’s Café, on College Avenue.

I understand you have a good excuse for being a few minutes late: You’ve been rehearsing for the gig we’re supposed to be talking about.

For the concert with the Marin Symphony on October 28 and 30. The very final versions of the score and parts are arriving. My copyist sent me the latest changes at 3:45 this morning. I’m working with Notesmith Music, the guy’s name is Graham Pellettieri. I know him from working with Strings magazine, I’ve published a few pieces. . .

What do you write about for them?

I’ve done a few articles about what’s generally known in the field as “alternative styles”, in other words, things not classical. And I wrote an etude book, called Stylistic Etudes for Solo Violin. One of the etudes is a tango, another is jazz style, there’s blues style. I’d submit one of them to Strings, and then have a discussion about the technique. I also have lots of YouTube films that are tutorials on actual physical technique for string players, how to achieve those sounds.

Is that a particular need among younger players?

A lot of string players floating around this area are doing Classical Revolution. It’s not that this stuff didn’t happen before, but the more they learn about playing appropriately in different styles, the more capacity they have to earn money. The walls are coming down, because young string players don’t see classical music as the only thing they can do.

“I used to say, I’m classically trained, but — . But now there’s no “but” any more.” – Jeremy CohenHow do you feel, watching the walls crumble?

In the early days, in the 1980s, when Dave [Balakrishnan] was doing this kind of stuff with Turtle Island [String Quartet], it was absolutely groundbreaking. Now, there are many groups who’ve modeled themselves after Turtle Island and Quartet San Francisco. I used to say, I’m classically trained, but — . But now there’s no “but” any more. The problem on the education side is that the institutions are still 99 percent driven by classical pedagogy. . .

The academy can be a Jurassic Park.

Yes. So I had to stop the explanation and just go play violin naturally, from classical to jazz into blues. You’ll hear it in the piece we’re doing for Alasdair Neale and the Marin Symphony. It’s not called Concerto Grosso anymore; it’s called Concerto Carnevale.

In the different kinds of music you’ve played professionally, did you have to push your classical training to the side?

In the blues, and in jazz, we have slides that are gravelly or groaning or expressive sounds that are not always pitch-centric. But the classical player hears it as out-of-tune, and doesn’t understand that it’s gestural in nature, and not pitch-driven. The bending of the pitch is an appropriate gesture to blues or jazz, where it’s not in classical.

How did you start to learn about this?

When I was young, I played along with Papa John Creech, It’s a Beautiful Day, Sugarcane Harris, Sid Paige from Dan Hicks & The Hot Licks; I listened to these fiddle players and their gestures and I tried to play along. And I realized that those were not technique-driven but ear-driven. Ideally, even classical music should be played this way. With any instrument in hand, you’re a voice, and you want to keep the vocal aspect of it.

And you’ve had Quartet San Francisco sounding out in different voices.

We’ve gone through phases. For our demo, we did a Latin CD, in ‘95 or ‘86, and that became an album which got two Grammy nominations, Best Crossover Album and Best Engineered - Classical. Then all of a sudden everyone started looking at us, but we fell into this category called Classical Crossover. It’s always been a dumping ground for, I don’t know, what is it?

What category name would you prefer?

I serve on the Board of Governors in San Francisco now for NARAS, and believe me, with all of the category changes that have happened in the last year-and-a-half, and all the brouhaha about it, I still don’t have a good descriptor for what we do. There were crossover violin players [previously]: Joe Venuti was a classicist to a certain degree, and Eddie South was a brilliant classical violinist, but he could play swing too. I didn’t create it. I’ve tried to talk to some writers about finding a genre and naming it.

In the meantime, QSF has been moving into new areas. After Látigo, our first, we did a North American-style album — music of Chick Corea, Duke Ellington, a little Leonard Bernstein, some Alan Menken. That second album got a Grammy nomination for Classical Crossover. And then the third one we did was all-Brubeck [the jazz pianist/composer], and that one got a Grammy nomination. All three in Classical Crossover, before the category got axed [last year]. That’s where we found our home, but it wasn’t a happy home. Because there also was the China National Orchestra doing film score music, Bryn Terfel doing pop material with the London Phil, and Yo-Yo Ma and Dave Brubeck.

We’d better get back to talking about the new Concerto Carnevale we’ll be hearing at the end of this month.

The Quartet now is navigating in all these genres; where we thrive is where we have passion for the music, and that bore us to the Marin Symphony. In 2008, Quartet San Francisco got asked to do a tango with them. That went over very well, and they had an opportunity to ask us back, for the opening of this season. Alasdair [Neale, music director] told me that the theme was Italian, and was there anything I knew out there that might fit. They’re doing Respighi’s Pines of Rome and Mendelssohn’s Italian Symphony. I said, I can’t think of anything that’s “out there”. Can you find out whether there’s any money for a commission? He said, there’s no money. I said, The hell with it, I’ll write a piece anyway.

My wife — Andrea Liguori, good Italian — was like, “Are you out of your mind? She was so mad at me, ‘cause she knew it would be eating me alive, the next however many months. That was February or March, and it has certainly inhibited my ability to get out there and earn as I’ve been accustomed to doing. I had to hunker down. Now I know what it takes — about three months of my life.

How did you structure it?

“[Alasdair] said, there’s no money. I said, The hell with it, I’ll write a piece anyway. - Jeremy CohenI started with the concerto grosso concept. I listened to Locatelli, Corelli, La Follia, all of the standard Italian-style concerto grossos. Also, this summer I taught for the San Luis Obispo Symphony, and the kids were doing the two-cello Vivaldi concerto grosso, so that stuff was fresh in my mind.

So I started writing, and what I do is start walking. As I walk around the house or down the street, I walk in rhythm, and I sing this music in my head. So I’m walking along hearing the concerto grosso, and then, at the same tempo [he scats], I’m throwing in things in a blues fiddling style, a combination of jazz and blues. So in the first movement we’ll be playing in a concerto grosso form, small band-big band, the Quartet plays a theme, the orchestra repeats it, typical concerto grosso. Then all of a sudden the language employs more harmonically jazzy sounds; they wanted a QSF twist on the piece. So the first movement is now called “Blue Baroque”.Then it goes back to a concerto grosso ending.

The second movement is called “Tango”. Remember, “Piazzolla” is an Italian name, and the bandoneón is an Italian instrument, and tangos were played by Italians and Germans in Argentina [including the best-known tango composer, Astor Piazzolla]. I was particularly moved and impressed by one piece of Piazzolla’s, Melodia in A minor, this simple piece that says so much with so little. And the challenge that I put up for myself in the second movement was to write as simple and as beautiful a melody as possible for the Quartet, and embellish it by using soloists in the orchestra.

The third movement is called “Tarantella”, and it just came right out of me. I break from the tarantella to have a second theme for the movement, a little more pensive, more legato, and it reminds me a bit of [Richard] Strauss and Copland. Alasdair looked at the score and suggested I add a bigger orchestral section to the end of the piece, which I did: The tarantella comes back, and it becomes a fun race to the finish.

More fruits of your eclectic labors.

I really feel like a native speaker in all of the genres in which I write. Nobody will argue that I’m not a jazz violinist. But keep in mind that Quartet San Francisco has achieved equal airplay on classical and on non-classical radio. I got an email the other day from Dave and Iola Brubeck, who were listening to the classical station in Connecticut, and said, We just heard your version of [Brubeck’s 1959 jazz hit] “Take Five” on the classical station. QSF’s own albums may have fifteen tracks, so people don’t look on us as playing full chamber works. Until they hear us, they don’t get what we’re doing. We’re perceived as not as serious as the Julliard or the Emerson. But we don’t approach anything we do as “light fare”.

What do the other members of the Quartet [violinist Matthew Szemela, violist Keith Lawrence, and cellist Kelley Maulbetsch] think about the new piece?

I think they’re really excited. We were sitting in the kitchen the other day, and we said, We’d better start thinking about an encore. We’re starting to get the idea that this may make a big splash. I’m not gonna make a hell of a lot of money doing this, so I might as well recapture that excitement of, you know what, when I grow up, I’m gonna be a musician, and it’s gonna be f-----’ awesome!