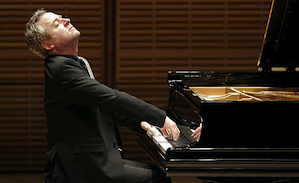 What’s your definition of genius? If the term refers to someone with a sharp, probing mind, wide-ranging interests, and a commitment to creativity, Jeremy Denk fits the bill. A recent recipient of the coveted MacArthur Fellowship — the so-called Genius Grant — he is highly accomplished as both a pianist and a writer. Denk just signed a deal to turn a New Yorker article about his musical education into a book, and he recently completed a libretto for an irreverent new opera, to premiere next spring.

Trading one type of keyboard for another, he will be this weekend’s soloist with the San Francisco Symphony. He will then join Music Director Michael Tilson Thomas and the orchestra on a short tour, including a Nov. 13th performance at Carnegie Hall. The 43-year-old North Carolina native chatted about a wide range of topics from his New York City home.

All of the mature Mozart concertos are pretty sublime. How did you and MTT choose No. 25 [in C Major, K. 305] for this tour?

This one has always had a special place in my heart. The last movement contains, for me, one of the most ravishing, extraordinary passages in all of Mozart, and therefore in all of music.

It’s one of the pieces where Mozart is experimenting rather profoundly with certain kinds of instabilities and ambivalences. It has an obsessive retreading of the boundary between light and dark. I find that fascinating and beautiful, and very moving. It has an almost Schubertian bittersweetness — except bittersweet isn’t quite the right word. It’s more unsettling than that. It’s as if he’s trying to destroy the very language that he brought to its epitome. It’s a piece that gives me a lot of shivers.

So how do you decide which of the many elements of Mozart’s music to emphasize when you’re playing it?

James Wood, the literary critic at The New Yorker, has this great phrase about narrators who are “reliably unreliable.” You learn that they are not to be trusted, and that becomes part of the fabric of the book. I think there’s something about that in how you play this concerto — how you waver back and forth. Obviously, there are passages where you’re just playing it beautifully, or wittily. For me, a very important part of playing a Mozart concerto is the wonder of each moment. In this case, part of the wonder is the sense that it might turn at any time.

You have mentioned that some of the first records you fell in love with as a kid were of Murray Perahia playing Mozart concertos. But from what I’ve read, you’re not the type of player who goes back and listens to other pianists’ recordings when you’re learning a piece. You’d rather start from scratch, as it were. What’s your reasoning behind that choice?

It’s one of the pieces where Mozart is experimenting rather profoundly with certain kinds of instabilities and ambivalences. It has an obsessive retreading of the boundary between light and dark.

I don’t mind clearing my head. I don’t think that’s unwise. Sometimes I will listen to other pianists for inspiration about a particular passage, listening for how other pianists have approached it. But I do enjoy taking my own counsel, so I’m not retracing other people’s steps too much. It’s very personal, but for me, it’s easy to get overwhelmed by the number of recordings that exist of any given piece, and feel a little bit stifled. There are some pianists I listen to very often, such as [the late Alfred] Cortot, but playing something completely different [from what I’m working on].

I keep reading references to different places where you grew up. Was your family in the military, or something?

Heavens no! We were in North Carolina until I was 5. My dad, who used to be a Catholic monk, was in the early wave of constructing computer networks on campuses. We moved to New Jersey for five years, where he worked for a lot of institutions, including Rutgers. We then moved to New Mexico, where he got a job at New Mexico State.

Was music a constant for you, as you moved from state to state?

I suppose it was. My parents were not musicians, but they were big music lovers, and they had a nice stable of records. Once I started the piano, at age 5, I never stopped. I had a lot of academic interests in my teen years — I still kind of do — but I never seriously considered quitting the piano.

I was surprised to read that your college minor, at Oberlin, was in chemistry.

For me, a very important part of playing a Mozart concerto is the wonder of each moment.

Actually, I had a desire to cut chemistry and go for English, which my parents resisted. I think I was more suited to math than chemistry, actually. I remember being moved, when I was about 15, by the Mandelbrot set in mathematics.

It’s this beautiful fractal situation in math. You can construct it through fairly simple mathematic means, and it comes out this incredibly beautiful, self-replicating shape of great symmetry and infinite complexity. I remember being very excited by that.

The Mandelbrot set shows you how seemingly abstruse math percolates into the most beautiful things we know in life, like fjords or snowflakes. I think there is some connection between that and music. When I delve into the complexities of how music works, it’s never just because I like complexity. I’m usually after that beauty.

When I delve into the complexities of how music works, it’s never just because I like complexity. I’m usually after that beauty.

Discussing mathematics, you sound like a true MacArthur Genius.

Thanks, but you’re not supposed to use that word. I’m a MacArthur Fellow.

I read a piece congratulating you on being one of three gay recipients of this year’s grants, at which point I realized I had no idea you were gay.

I don’t make a big point of the gay business on my blog. I don’t want it to be a “gay blog.” But if you read it closely, the gayness is there, especially when I post a shirtless picture of [Twilight actor] Taylor Lautner. So there are cues! I’m very open about it; it’s obviously a very important part of my life and my identity. I came out pretty late. I was 32.

Did coming out change your playing?

I feel that it did. It certainly changed my emotional life, in mostly good ways. I never felt I was hiding anything or keeping a secret, but when it finally happened, I definitely felt more truly myself than I had before.

The MacArthur comes with a $625,000 stipend. What are you going to do with the money?

It’s the question of the hour, and one I have no satisfactory answer for. I can’t change my life on a dime right now, because I’m booked for concerts [many months into the future]. So I need to prioritize. I hope it allows me to clear out some of the year to practice, recharge, and learn new repertoire. I hope I can expand the possibilities of the blog. I’d also like to do some commissioning. I feel a little bit guilty about not doing more of that during the last several years. But mainly it’ll give me the freedom not to be a hamster on a wheel as much as I have been.

Speaking of writing, you recently completed writing the libretto for a new Steven Stucky opera, which will have its debut at next June’s Ojai Festival. [Editor’s note: Denk is music director of that festival for 2014. Much of its programming, including the opera, will then travel to Berkeley for Ojai North, June 19–21.] You’ve adapted a classic book of music theory by Charles Rosen?

Of course, it’s intrinsically ridiculous to make an opera out of Charles’ very wonky musicological book The Classical Style. On the other hand, I always wanted to know what the tonic and the dominant would say if they could talk.

So you turned them into actual characters?

Yes. They’ll be talking for themselves, as will Mozart, Haydn, Beethoven — and Charles. [Steven Stucky and I] are bringing the ridiculously abstruse language that we use to describe classical music to life. Hopefully, in the process, we’re demystifying it a little bit, and having a lot of fun with it. It’ll be a kind of music theory lesson for some people. For the people who know all that, it will hopefully be very amusing.

I once wrote a blog post about the issue “Can classical music be funny?” I think that’s a ridiculous question. Charles Rosen wrote that the classical style of Haydn, Mozart, and Beethoven was basically built on the style of comic opera. That’s the foundation. Obviously, they very often turned comic means to tremendously profound ends. But for me, humor is built deeply into the fabric of a lot of the music I love the most.