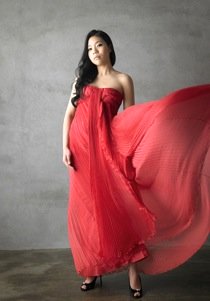 Although the youngest contender, at age 19, Korean-born pianist Joyce Yang scored high marks in several events at the 12th Van Cliburn International Competition in 2005. She took home to her New York City apartment a Silver Medal, the Beverly Taylor Smith Award for best performance of a new work (Sebastian Currier’s lighthearted Scarlatti Cadences and Brainstorm), and the Steven De Groote Memorial Award for her chamber collaboration with the Takács Quartet (in Dvořák’s Piano Quartet). This year, she received an Avery Fisher Career Grant. Continuing to tour internationally as a recitalist and soloist, Yang made her San Francisco Symphony debut this summer, and returns next week for two evenings with the Marin Symphony. SFCV chatted with her on a Sunday afternoon, after her early-morning return from an appearance at the Chopin Society of Atlanta.

Is Sunday ever a day of rest for you?

I would usually have no idea of whether it is Sunday. It’s just, Do I play tonight? Although I’ll probably get a call from Mom: “Did you go to church today?” She’s in Stony Brook [New York, where Yang was raised from age 11].

She had something to do with your receiving a piano as a childhood birthday present, back in Korea. How old were you?

I was 4. My aunt pretty much made my parents get me this gift. And as a 4-year-old, my impressions were: “How cool! I have a white piano!” I remember feeling like it was a giant white chocolate. ... My first piano teacher buried this idea in my head that only very good kids deserve to learn the piano, “So eat your vegetables and I’ll teach you a song. ...”

Did you begin to favor a particular part of the repertoire?

I’m not surprised that I play so much Russian music these days. I remember having one recording of Tchaikovsky’s Violin Concerto, and one of my favorite things to do was put the CD on and take the chopsticks and conduct [along with it], all day. And then I would refer all the things I heard to tastes. I would tell my mom, “This here is sweeter than that there.” ... And it came out again way later: I have some kind of case of synesthesia. ... It’s those other senses that guide my ears forward.

How does the synesthesia affect your approach?

When I have a phrase that is problematic or confusing me, the first thing I do is take out a piece of paper and colored pencils. And then I would be like, Yes, the actual melodic line is going up, but is it really? No — it’s actually a squiggly line going down. And what color is it? Is it changing color in this little phrase? Yes: Right over here, there’s a little splash of green.

In Marin, you’ll be doing Rachmaninov [Rhapsody on a Theme of Paganini], and you’re doing a lot of Rachmaninov elsewhere. What makes you favor this particular Russian?

In one way, it’s very organic music that gets to the core of human emotion. It’s like, even if you throw it at someone who’s never been to a classical concert before, it will reach them. Like water. It’ll get to them much better than other composers. In another way, there is a huge variety of ways I can do any single phrase. ... I never know what’s going to happen until I’m with the orchestra, with the conductor.

So the Paganini has felt different in different places?

In 2006, with Lorin Maazel [and the New York Philharmonic], we did this piece seven times in different venues. I could not believe it: Night after night, it was a different piece. Completely different acoustics, what we ate before the concert, how we feel — it’s all different, and this same music transformed so differently night after night. It was mind-boggling for me. And by night four or five, I knew that something totally different was going to happen: different tempos, different rubatos. ... In a way, I think Rachmaninov is very much like playing chamber music ... very close to making spontaneous music simultaneously, rather than doing something we just rehearsed three times and are doing again.

What’s it like making chamber music with the Takács?

They are dream partners for me. It really doesn’t get any better. I think I am very good at coming up with spontaneous ideas that wouldn’t necessarily be present with others. I really take a chance and start a weird [musical] sentence like: “The oysters are —” and then I give it to them. ... All I have to do is implant these ideas into the music, and then they take me to the most magical places. ... No move will be ignored, or suppressed. I don’t have to be reliable; I can be as unreliable as possible, and it’ll get even better because it’s unreliable. Taking that chance with them, I can’t really do that with many people. With them, I’m the freest I could ever be, and I feel so good about my playing for being so spontaneous and still having everything make sense afterwards.

Talking about reliability and un-, you first got attention by winning at the Van Cliburn. When you’re competing, don’t you have to be reliable?

I’d be more free in my own recitals, because one wrong move could cost me so much in a competition. It could backfire with a lot of the jury members; they might be allergic to it. But in the Cliburn, when everyone was trying to control it to the last little bit, I was in a way still quite free. I was like, I am here to enjoy this as a concert, playing for the audience, not playing for the jury members.

More an entertainer than a competitor.

Right. I was like, I am myself, and I will not appear nervous, nor will I compare myself to other people. It’s just like how I tell myself that I’m awesome, right before I go on stage. You just gotta think that way. Once you start doubting it, it’s the end.

There’s still that stereotype about Asians being competitive.

It sounds like you’re getting a New York accent on top of your Korean-American accent.

[Laughs] It’s a totally different mentality here. In Korea, people are similar enough that if you try really hard to be that person next to you on the subway, you could be. Whereas here, that’s impossible. There’s such a big difference that you have to be you and not the person next to you, because the differences are just so great.

In 2006, you went back to Korea with the New York Philharmonic, and you got to your hometown, Taejon.

It was very special. For my parents, that was their defining moment: that I would come back, finally, with the New York Phil. And they pretty much called up every person they knew. And you would not believe what I saw at the hall, after I was done. Every person I’d ever met was there! It was like a wedding, but without the groom. ... I felt kind of intimidated, but also very welcome. It was more for the parents ... after I’d changed everything for them, for them to sit in a first-tier box and for me to play for them, really.

Having perused your Web site, I have to ask you a question that might sound like it belongs in a different kind of telephone conversation: What are you wearing?

[Laughing hilariously.] This is taking a weird turn.

Well, it looks like clothing is very important to you. Is it you that chooses what you wear for photo shoots and performances, or does somebody advise you?

No, it’s all me. It’s a constant search for the perfect outfit for the perfect occasion. Is it a suburban setting with a concert at four o’clock instead of six o’clock? That’s really the girly side of me coming out. And I do pay attention, quite a bit, to what’s going on on the fashion scene today. ... The strapless on my Web site? That’s an Alessandro Dell’Acqua. The flowy red thing, that’s my one and only Dior gown [giggles].

Maybe there’s an aesthetic you appreciate in fashion, not totally different from your musical aesthetic.

Yah. I think what I wear, the vision, should heighten what you hear. ... I just acquired a Badgley Mischka couture that has this crazy tail behind me. And I might bring it to Marin. But I have to be at peace with it before I can actually take it with me. I have to feel like a major drama queen to come out in that.

I think Marin would be a good place for that. They’d have fun with it. They’re all getting ready for the Mill Valley Film Festival, when Mill Valley becomes Little Hollywood.

Well, do come see me.