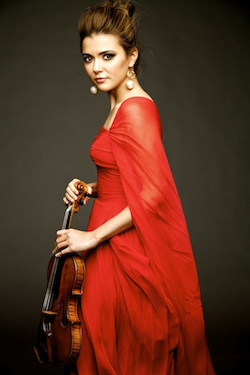 If you search for YouTube videos of violinist Karen Gomyo, one of the first things that pops up is a miniprofile from E.T. Canada that clearly focuses on a wider range of performers. In her case, it showcased a seminative daughter: Born in Japan to a Japanese mother and a French Canadian father, she has early memories of Montreal, where she lived from age 2 until she moved to New York to enroll in the Juilliard School at age 11.

Now 30 and living in New York, Gomyo is rapidly establishing herself as a major soloist; she performed the Tchaikovsky concerto with the San Francisco Symphony in July as part of its summer series. She had planned to return to the Bay Area this weekend to perform Edouard Lalo’s virtuoso showpiece Symphonie Espagnole with Symphony Silicon Valley in San Jose before illness forced her to cancel. (She has been replaced on the SSV program by Mayuki Kamio.) She spoke with SFCV from Montreal.

Have you been playing Symphonie Espagnole for a long time?

I played it for the first time in 2005. I started playing it a lot, and then took a break from it for a few years before bringing it back into my repertoire this year. It is such a charming piece, full of sunshine, joy, and life. It’s extremely technically difficult for the violinist, but my focus this time around is less on technique and more on the overall expression of the piece. It’s fantastically lyrical music; a lot can be done within it. That’s the beauty of putting repertoire away for a little bit: You approach it with different eyes and ears.

When you work with a conductor for the first time, as you would have done with John Nelson, how do you negotiate any differences in the way you approach a concerto?

Conductors who have been around a long time eventually realize that we soloists have given the piece probably a lot more thought than they have. They have to know a lot, but it’s soloists who dissect a piece from beginning to end. As long as they have that general understanding, we get along fine.

A conductor might suggest something, and of course I’m open-minded to that. But in the past, I’ve had experience with a couple of younger conductors who have said, “This is how I see the piece. Now, what do you think?” That approach is a little bit dangerous. If the soloist doesn’t feel comfortable, the expression is going to be limited.

As a female artist, you have to think a lot about your wardrobe. Pianist Yuja Wang has recently gotten at least as much attention for her style of dress as for her playing. How do you approach the issue of what to wear onstage?

When I choose my dresses, I try to color-coordinate with the music. I don’t think I would wear a flashy red dress for Beethoven; I don’t see those going hand-in-hand. I picture a classy, black gown with some sparkles on it. But for the Lalo, red is perfect. It’s a festive piece of music, and I think it’s fine to represent that in the colors you are wearing.

I grew up going to Montreal Symphony concerts whenever a violinist was the soloist. Whenever it was a female performer, I was always excited about what they would wear. The moment before they stepped out on the stage, I was wondering what color it would be and whether it would be flow-y. This was a little girl thing, of course.

It’s natural that people react to what is being worn on stage, but I would not want to attract too much attention with what I’m wearing. I personally would not wear a short skirt. I don’t know Yuja, but her musical personality is very young and bubbly, and her wardrobe represents that. I think she’s being completely honest about who she is. That isn’t my personality, so my wardrobe choices are a little bit different; they’re true to who I am.

You were first exposed to the violin when your mother took you to hear Midori play with the Montreal Symphony when you were 5. Was she, or any other family member, musical?

“Around 16, 17, or 18, we all asked ourselves, Is this really what I want to do with my life? For me, when that question came, I got even more attached to music.”

Not at all. In fact, everybody in my family is tone deaf! My mother is a visual artist, so there is art in my blood. She knew that I loved music from a very young age. Apparently I was humming and singing before I could speak words. She saw that music was something that made me happy. My mother is Japanese, and she had heard about this Japanese phenomenon, Midori, who was 14 years old at the time. So she took me, and that was the moment I discovered the violin. I thought, I want to do what she’s doing.

And so you did. You were discovered by the legendary violin teacher Dorothy DeLay, went to Juilliard at age 11, and started performing professionally at age 15. Did you ever question that decision?

I started it because I loved it. My mother didn’t force me. When I went to Juilliard, I was 11, and there were other kids about that age in the precollege division. In many cases, they started because their parents made them. Around 16, 17, or 18, we all asked ourselves, Is this really what I want to do with my life? A lot of people decided to do something else. For me, when that question came, I got even more attached to music. It seemed like a safe place to hide away at an age when you feel a lot of confusion.

Tell me about your Stradivarius.

I’ve had it for 10 or 11 years. There are several hundred Strad violins, and they can be very different. Mine was made about eight years before Strad started making the instruments that we now consider the ultimate, golden-era period. I would describe my violin as having a very pure tone. That doesn’t mean quiet; it certainly carries very well in a hall. But it’s a silvery tone. It has a lot of warmth.

I’m incredibly attached to it. When I first picked it up 10 years ago, it felt to me that it was a well-behaved, polite instrument that had a lot of potential. At that point it hadn’t been played much for a few decades. Over the next few years, the more it was played on, the more it started to shine from within.

Culturally, do you think of yourself as Canadian, American, Japanese, or a citizen of the world?

Musicians travel so much, and we study and play with people from a mix of different backgrounds. I feel at home in Canada; I’m always reminded how nice the people are here! But I also feel very much at home in New York, maybe because you have all kinds of people there. So I guess I feel like a New Yorker.