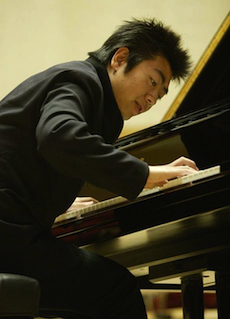 The ebullient pianist Lang Lang enjoys sharing the musical splendor in which he’s been arrayed, ever since transporting his dynamic talent from his native China to European competitions and studies with Gary Graffman at the Curtis Institute in his mid-teens. Aside from a vigorous solo touring and recording schedule, which has included stops at the Olympics and the Nobel Peace Prize Concert, he’s performed on TV and on film soundtracks and has toured with jazz piano titan Herbie Hancock. Lang Lang has been named Cultural Ambassador to China by NARAS, and an International Goodwill Ambassador by UNICEF. This weekend he opens Weill Hall at the Green Music Center at Sonoma State and on Monday gives a recital at the Mondavi Center at UC Davis. In November, he returns to the San Francisco Symphony. Three months after his 30th birthday, Lang Lang shared a quarter-hour with SFCV, from his New York City residence.

How should I pronounce your name?

I’ve read that it means “Brilliance of the Day.” Does that fit you?

I hope so! [Chuckles]

And what about the Confucian saying, that at age 30 one is ready to stand up?

Of course, in ancient times, being 30 was like being 50 today. But for me, 30 is still a pretty big deal. That’s why I started to teach this year. I have a school now, and a foundation [the Lang Lang Music World, and the Lang Lang International Music Foundation, respectively].

The YouTube scenes of you working with kids are inspiring. In your autobiography [Journey of a Thousand Miles, 2008, written with David Ritz], you talked about your own childhood, including your expulsion from your tutor’s studio in China when you were 9, because you were struggling with your lessons. Did that provide you a lesson you’ve passed on to others?

What I’m trying to do is to help kids not go through bad problems. That was a shadow in my life for a long time, to get fired by the teacher and then have problems with my father. It was the wrong way to be. So, for me, I like to openly share the problem, and to try to inspire kids to avoid that kind of problem.

How do they do that?

You have to be more open about choosing the right teacher. Back then, people told me that this teacher was the best one at the [Beijing] Conservatory to study with, but even from the first class, the chemical feelings were wrong. So you should stop there; you shouldn’t even start, if you don’t feel connected and the teacher doesn’t really like who you are. You need to be more open to other choices, not just listening to other people. In music, there’s only one “right” way, where you feel connected, and that means it’s right for you.

I never do things to just please anyone. You need to trust yourself and the sound you are producing.

Aside from teachers, role models like you are important to kids. What about you appeals to kids the most?

Just that I try my best in every concert, and in every piece that I play. I get connected to the music as close as I can.

In those YouTube clips, the kids also seem turned on by how animated you are, though some critics have come down on you for that same matter of style. Has your approach to the keyboard changed with time?

I think that I know much more now than when I was 20 years old. But I never do things to just please anyone. You need to trust yourself and the sound you are producing. And the only way to do that is to keep learning and keep improving.

In the title to your latest release [on Sony], you refer to Liszt as your “Piano Hero.” Who are your other heroes?

Last year it was Liszt, this year Chopin. When I was a kid, 50 percent of what I played was Chopin, because he’s accessible to people. He has a very sentimental approach, and you very naturally fit into the sound he creates.

I’ve heard you speak about bringing the sound across, comparing the keyboard with the pedals.

I told President Obama’s daughters, “Please take a nap, and eat strawberries and chocolate before your concert.”

Honestly, finger technique is harder. The first thing you learn from Bach is how to play without pedals, to get the same result as with pedals. Already our hands should have certain techniques to make the piano as clean as possible, without any support from the pedals. After that, you start to learn how to support your hands with your feet, to make it more magical, not just more responsive — to make it more colorful, make certain characters. So the pedal becomes much more than just sustaining the sound, actually helping to open up more of a sound world.

You got Steinway to produce a Lang Lang Piano, the first time they named an instrument for an artist. What’s special about it? I’ve heard it’s good for kids.

First, it’s more affordable than a regular Steinway. And the design is more kid-friendly; it’s an edgier shape. Kids are edgier than adults, and sometimes they can feel that pianos are old-fashioned, out of their time. I wanted something kids would feel more comfortable with, in their imagination. [The instrument features a front panel that morphs into a whiteboard, and an extended music desk which makes scores easier for young players to read.]

Among your fans have been several heads of state. Did Barack Obama turn out to be a good and wise fan of classical music?

For sure! His family loves music. His girls, one studies flute [Malia, age 14], and one studies piano [Sasha, 11]. And they were so cute! They were asking questions — I was there with the Jonas Brothers [at the White House, in 2010] — asking us how to not be nervous on a stage. So I told them, “Please take a nap, and eat strawberries and chocolate before your concert.”