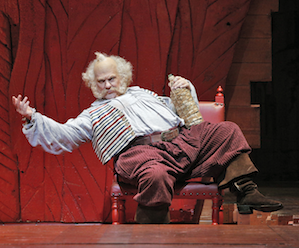 It has been an eventful couple of years for bass-baritone Bryn Terfel. Professionally, he starred as Wotan in the controversial new Ring Cycle for the Metropolitan Opera. Personally, he went through a painful divorce, which was thoroughly covered by the British tabloids. Now, he is back at the San Francisco Opera for the first time in over a decade, singing one of his signature roles, Verdi’s Falstaff, which opens on Oct. 8 and runs through Nov. 2.

How do you get into the mind of Falstaff, one of Shakespeare’s greatest comic creations?

The physical transformation into the character — costume, makeup, belly, wigs — is somewhat important to me. Is that because I’m a terrible actor? Maybe. I thrive a little bit in the hour I spend in the makeup chair, giggling at myself as I’m transformed into another character.

There’s a great tradition of British actors, including Olivier, who worked in that outside-in sort of way, discovering characters by first determining their look and mannerisms.

Yes. Of course, usually the music takes over, and it doesn’t matter what the production is. The octogenarian Verdi wrote such a wonderful comic opera. I feel so privileged to be a part of a line of great singers who have portrayed Falstaff.

Having just returned from the Napa Valley, where I tasted numerous cabernet sauvignons, I’ve been thinking about whether Falstaff grows in complexity with age. I think he does. I think I know the role better. I know what happens in the music, and the portrayal of the character is in that music. Unlike, say, Macbeth, or Iago, he has no arias where he expresses what the character is all about. Without that, you have to really capitalize on the moments you do have, both by yourself and also with your colleagues. They feed you glorious lines, which you react to.

Does that mean your performance changes considerably from night to night, depending on what’s going on in the moment onstage?

Well, osmosis on stage is pretty infectious. I think when you want to pull the stops out, if you have a couple of friends in the audience, a kick of adrenaline can help you accomplish amazing feats — even if you’re not feeling 100 percent. Although I consider myself a Mack truck, we are privy to being open to the elements. Laryngitis can always stop you. You can also be having trouble in your personal life.

But you just carry on. I think that’s a very Falstaffian motto. There’s no point in me putting my head in my feathers. I have to earn a living! Also, when you open that stage door, we [artists] are entertained, as well. You step out of your own problems for three hours. It’s like a round of golf.

There are a lot of great golf courses in the Bay Area. Is that one reason they were able to lure you back?

Golf, wine, food, the city itself: All those play a part. But there’s also a great team at the San Francisco Opera. And the opera house is a beautiful place. Architecturally, it’s an iconic American house. I went to see Boito’s Mephistopheles the other night. I sat in one of those glorious boxes and was transformed. I haven’t been back here in 12 years.

I’ve been [doing most of my U.S. work at] the Metropolitan Opera in recent seasons, including the new Ring Cycle. When you do the Ring, you spend four seasons in an opera house. The Ring takes its toll on everybody. It means I can’t sing anywhere else.

Now that you’ve mentioned it, everybody seems to have an opinion on the Met’s new Ring Cycle — even people who haven’t seen it. All in all, was it a good experience for you?

I had seen quite a lot of [director] Robert Lepage’s work on the Internet, and I thought it was glorious. I thought if he brings a bit of his Cirque du Soleil [sensibility] to the Met, most probably it’ll be magnificent. I think he shot himself a little bit in the foot with “the machine” [the gigantic stage machinery that dominated the production].

There were some magnificent moments, as there are in any Ring Cycle. But is there a Ring Cycle where everyone walks out saying, “Wow!”? It’s such a monumental piece; some aspects are going to be positive for one person and negative for another. I do know that youngsters who came to see the Lepage Ring loved it. That’s very important.

The octogenarian Verdi wrote such a wonderful comic opera. I feel so privileged to be a part of a line of great singers who have portrayed Falstaff.

What’s the fundamental difference between singing Wagner and Verdi?

I can’t sing Verdi, but I think I can sing Wagner. Falstaff is the only Verdi that I sing. I can’t sing the baritone roles like Trovatore or Traviata. It’s the high tessitura — that real Italianate baritone quality. That’s the reason I’ve gone more toward the Wagner repertoire. I haven’t sung at Bayreuth, because I always leave my summers free to be with my kids. So unfortunately, I don’t think that opportunity would ever arise.

That’d be quite an experience.

It would be. But I’d have to be there from April until September. I did do Die Meistersinger von Nurnberg with the Welsh Opera, which was wonderful. I’d like to repeat it someday, somewhere. It’s the longest and most difficult role written for a bass-baritone. After singing it, you feel you have accomplished something, without a doubt.

Is that feeling of accomplishment important to you?

Yes. You need to like what you do. So I’ll carry on picking up scores, learning the notes, dissecting the words, until the time has come where I shouldn’t. I used to say I would give up singing “when the time is right,” but you can’t say these kinds of things. I’ve gotten through a 25-year career. I’ve just gone through a divorce. Things are different. Singing becomes more important, in a way.

More important? How so?

I want to feel I’m leaving some kind of pathway for other singers. The Welsh singers who came to San Francisco before me paved the way for me. I’d think, 'If my compatriots like Geraint Evans and Gwyneth Jones can' [have international careers in opera], I’m going to work hard to develop my skills, so can I do exactly the same. It’s like the carrying of a baton.

Your recording has slowed down a bit in recent years. Any plans along those lines?

I’m thinking of [Schubert’s song cycle] Winterreise. I actually opened the book two days ago. I’m listening every day now to [the CD of that work by] Hans Hotter and Gerald Moore. They serenade me every morning! I’ve never heard anybody sing it live, because I don’t feel I’m worthy to do so until I know it myself. I missed the chance to hear Jonas Kaufmann in Munich. I told him, “I don’t feel I can react to your hard work and dedication. If I knew it, I’d be there with bells on.”

Did he understand that?

I want to feel I’m leaving some kind of pathway for other singers. The Welsh singers who came to San Francisco before me paved the way for me.

It’s a long way from Schubert, but I see you’ll be singing Sweeney Todd with the New York Philharmonic in the spring.

I went nearly on bended knee to [the orchestra’s executive director] Zarin Mehta to say, “Please bring back the Sweeney I couldn’t do because of a back operation.” [Terfel also had to cancel his performances in the semistaged version of that musical with the San Francisco Symphony in 2001.] I am chomping at the bit to bring that misfit malcontent back to the stage.

In the meantime, you get to play another intriguing malcontent, Falstaff, which I imagine is very enjoyable too.

Yes, indeed. Most of the descriptions we hear of Sir John are negative. A thief. A liar. A failed womanizer. But he always carries on. His attitude is, “Without me, the lives of the people of Windsor would not be as interesting.” That little glass of warm wine brings back the spark into his life.