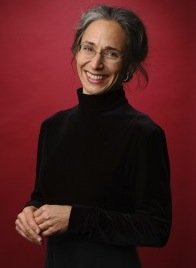 In its 27 years of looking through six centuries of music, San Francisco Choral Artists has come up with wonderful things to sing, in the process collaborating with a variety of ensembles and with living composers from near and far. This month’s trio of concerts, under the title “Prophets, Kings, and Klezmer,” takes the group into two synagogues and a Lutheran church, in the company of Veretski Pass, the Bay Area–based trio famed for its instrumental celebration of Jewish traditions from Eastern Europe. SFCV talked with Choral Artists Artistic Director Magen Solomon, who’s also an editor of the Choral Journal, about her group and its latest explorations.

You just got back from Reno.

It was the conference of the Western Division of the American Choral Directors Association, one of those seven-a.m.-to-midnight things. I’m on the board, so I was running a couple of the sessions.

Did you bring anything useful home from the conference?

Basically, I’m taking the temperature of the health of the choral art in our part of the world, and it seems to be doing very well, despite the fact that there’s not enough money to go around. More people are involved with choirs than with any other musical form, so it’s pretty dominant in our culture, despite the fact that most classical radio stations do not put choral music at the top of their playlists. The conference is also a chance to hear a lot of great choirs.

What’s the makeup of yours?

There’s 24 of them, and they come from all over. I have a singer who comes from Stockton, some from the San Jose area, somebody who comes down from Sonoma, and lots from Walnut Creek. We meet in San Francisco, at St. Dominic’s Church. It’s a huge honor for me that they’re not only willing to give up many of their Monday nights, but to spend many hours in the car, in order to make music together.

Hopefully, they’re listening to some good CDs and to KDFC.

I’m sure they are. And they’re a wonderfully caring group. There are a couple of singers who’ve been in the group longer than I have, and I’ve been there for 17 years. But we have singers who are right out of college, as well as some who are retired. A good number of them are music professionals, a lot are music teachers, but we also have a forester, lawyers, a couple of business owners, and quite a few tech people.

The way I try to approach the music is to start with the music and then see how the text, or the theology behind it, informs the music.

And faith? I’m noting that your last program had a Christmas theme, and this one is a Jewish thing.

To be honest, it’s not something we talk about. The way I try to approach the music is to start with the music and then see how the text, or the theology behind it, informs the music. I’m Jewish, and one of my favorite composers is Bach. And if you’re gonna be a choral musician, and you’re Jewish, you need to come to terms with the fact that an awful lot of what you’re gonna spend your life with is Christian music — and it’s glorious, gorgeous stuff. I think it’s possible to sing a Mass or a psalm setting and connect deeply with the meaning of the text and the music, without saying, “This is also what I believe.”

Can you apply that to this month’s program?

We’re doing a lot of psalm settings, and they’re set in many, many different ways. One of the sets in the program is called “2000 Years of Psalms,” and in the first of those pieces, by [contemporary Massachusetts composer] Joshua Jacobson, he takes Psalm 114 and alternates Sephardic cantillation [ritual chanting heard in a synagogue] with Gregorian chant, for each alternating line of the psalm. And what’s really interesting is how similar they are!

The shape of the melody is almost identical. [She sings several successive lines.]

Yes, it’s fascinating! Then we do Salomone Rossi’s setting of Psalm 128. He’s special because he was the best-known Jewish composer for about 400 years, sort of on the cusp of Renaissance and Baroque music, with most of his stuff written around 1600. He worked at the court of Mantua, so it connected with Monteverdi. But he also wrote for the Jewish service. … The modern Jewish repertoire is not by and large choral; it’s mostly chant-based. But in the 19th century, there was a huge Jewish choral tradition, and one of the pieces we’re doing is by [David] Nowakowsky, who was from the Ukraine and died in 1921. A great deal of [Jewish] music was lost in the Second [World] War, many books and synagogues were destroyed. But it was also a matter of tastes changing.

What else will we hear in the psalms section of your program?

We’ll move a couple hundred years to Mendelssohn and one of his settings, Richte mich, Gott, which is six-part, men’s choir and women’s choir, back-and-forth. We’ll do a little teeny piece by Karen Tarlow, who’s a Massachusetts composer, a simple two-part unaccompanied piece, from Psalm 92. It was written for me many years ago, when I taught at Smith College. And we end that section with George Rochberg’s Psalm 150, one of my absolutely favorite pieces in the world. It proves that 12-tone music doesn’t have to be ugly. It has melodic interest and is harmonically satisfying.

I want to open up these contemporary pieces for people.

I would hope so. [In other program sections] we have two pieces by Matt Van Brink, who’s our Composer-Not-In-Residence.

How did you come up with that term?

We’ve had composers-in-residence since 1999 … but I didn’t want to work only with composers who happen to live in the Bay Area, and I wanted to get some new voices into the mix. Matt has a lot of jazz and folk in his background. His They Disappear is from a really beautiful poem from the Holocaust by Abraham Reisen, translated by [former San Francisco State University teacher] Leonard Wolf. And this piece was written [by Van Brink] for Veretski Pass, the klezmer band, and us together. We had our first rehearsal with them on Monday, and the combination of the voices with the sound of their violin, cimbalom, and bass was just extraordinary, how the longing comes through in the instrumental parts, almost Gypsylike. We have two pieces we’re doing with them, and a bunch of stuff by ourselves, and they’re doing a bunch of stuff by themselves.

For your previous program, you worked with the Alexander String Quartet. I see a similarity between your approach and the programming of the New Century Chamber Orchestra, which I heard premiere Mike Marshall’s mandolin concerto last weekend.

In our shared emphasis on contemporary composers, absolutely.

And that’s one of the things I love, how they pair old and new stuff, and it’s one of the reasons I always thought we’d be an interesting fit. Because one of the things I feel very strongly about in doing 20th- and 21st-century music is, it needs a context. Either in a thematic context, or a melodic or sonic or textual or emotional context, I kind of want to open up these contemporary pieces for people.

Aside from the programming, I assume it was your idea to schedule two out of three of your upcoming dates in synagogues.

Absolutely. For one thing, I’m interested in presenting concerts to the Jewish community which will be in a setting comfortable for them, and I know people who don’t feel crazy about sitting in churches a lot (particularly hearing Christmas music). It’s particularly nice that one of the synagogues is Etz Chayim [in Palo Alto], which is the congregation I used to belong to [before moving to Oakland]. But I want to encourage non-Jewish people to feel that it’ll be comfortable for them, too. There’s nothing about entering a synagogue, or a church, that means that absolutely anybody can’t come to our concerts.