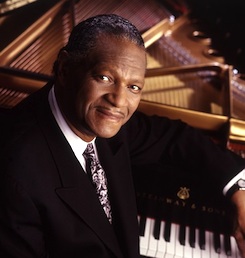 With a pounding left hand and an inclination toward quartal harmonies, McCoy Tyner has forged one of the more recognizable and admired styles in jazz piano, starting with his time in the John Coltrane Quartet in the 1960s and continuing to the present day. On Oct. 16, at Herbst Theatre, under the auspices of SFJAZZ, Tyner will take a small ensemble of younger players and their audience on a nostalgia trip through the song list of one of the “classic” Quartet’s most popular albums, John Coltrane and Johnny Hartman, produced by the legendary Bob Thiele and released on the Impulse label in 1963. Saxophonist and composer Coltrane, nicknamed “Trane,” died in 1967, but Tyner went on to write his own material and to perform and record with his own groups and in collaborations. Until 2010, he was booked for annual week-long residencies (which may get revived) at the Yoshi’s clubs in Oakland and San Francisco. Tyner spoke with SFCV about this month’s tribute gig and other peeks at the past, as well as his healthy and active present.

I have a shout-out for you from one of those guys out of your past, David Amram, the French horn player. I had lunch with him today, and he said to say hello. He’s 81, but he gets around.

I’m glad to hear that, because hearing that somebody like you is in good health and happy is good for those of us a bit younger.

Well, it’s possible, if you take care of yourself, and I do. I eat proper food, veggies, and drink carrot juice. And I know, being from San Francisco, that you guys have been on a health food trip for a long time. You have to be diligent about taking care of yourself, especially when you’re on the road. We did a lot of driving in the early days of the [John Coltrane] Quartet. John would pull over when he got tired and let Elvin [Jones] drive. And that was an experience! Sometimes I’d wake up and say, “Jeez, how fast are we going?” He was a good driver, but he kept his foot on that pedal.

What do you expect from a drummer!

Also, music has kept me really fresh. I’m like a little kid when I’m playing, enjoying it.

I’m noticing that two out of your last three records, Quartet and Solo, were recorded here in San Francisco. It sounds like you like doing jazz here.

Oh yeah, I do. It’s always been a great jazz town, a very free atmosphere. There’s a lot of creative people on the street.

Philadelphia, your hometown, also had a lot of music when you were coming up in it.

It goes back to when I was a kid, playing in my mother’s beauty shop. She’s the one who bought the piano. I started playing when I was 13, and had a rhythm-and-blues band when I was 15, and around 16 or so I got into modern jazz. I was encouraged by some of the older musicians in the neighborhood. Then Bud Powell moved in right around the corner from me, with his brother Richie [both innovative jazz pianists], and he was very dexterous and flowing, and that was a great thing, having my hero on piano. The Heath brothers were down in South Philly, and we had Benny Golson, and Ray Bryant and his brother. I also liked [pianist Thelonious] Monk’s conservatism when it came to notes, but his choices were very wise and appropriate harmonically. He left space, he wasn’t trying to fill up every bar, he was very thoughtful and sensitive in the moment. In the beginning, I picked up a few little pointers, but I made up my mind when I was very young that I never wanted to be like anyone else. I would never try to copy somebody.

I started playing when I was 13, and had a rhythm-and-blues band when I was 15, and around 16 or so I got into modern jazz. Is there anything of Philly in your sound?

Philly was a good blues town, and I did play with some blues singers, and I did a lot of standard show tunes. Those gigs broadened your repertoire.

How did you connect with Coltrane, and how did it feel settling into the Quartet?

I knew John since I was a teenager. He was from North Carolina, but he and his family moved to North Philly. I was playing in Cal Massey’s band, me and Jimmy Garrison and Albert Heath and Clarence Sharpe, and Cal introduced me to John. Later, there was a verbal commitment that we made, that when he quit Miles’ [Davis] band and formed his own band, I would be a member. I don’t know what attracted him to me, but we were very compatible. In the beginning, he utilized more space than he did later. He could play a very beautiful ballad and utilize space very well, but he was always searching, looking for something new, for something he wasn’t playing yet but could play. His harmonic concepts got denser as time went on.

When we think of your music, we tend to hear those intervals of a fourth. How did you come by that?

That’s just the way I was hearing music, when I was a teenager. Since I was a kid, I was hearing something different, though it didn’t come out until I started working with John. An idea is an idea, and if you work hard enough, you can materialize it. At one time, John was very interested in Indian music, so we’d experiment with different things. A lot of our scales were used in Eastern music, and African music, as well. I felt there was some sort of connection between all that music. And what makes jazz so important is, without losing its character, it can incorporate all those sorts of things.

An idea is an idea, and if you work hard enough, you can materialize it.

Trane’s way with a ballad and your experience with singers must have set you up for recording with Johnny Hartman, even though the Quartet’s material, before and after that 1963 album, was pretty much instrumental.

Well, we’d done the song My Favorite Things, which was from The Sound of Music.

Yeah, but you did it instrumental [on a 1961 Atlantic Records album].

Thanks, McCoy. So the Hartman album was special?

Well, it was the first time I recorded with a vocalist on the professional level. But playing with John, John played like a vocalist in a lot of ways, his tone and his phrasing. It was almost like he was singing. And Johnny and John had been in somebody’s band together.

See, you know more than I do! [Laughs] Yes, Johnny’s name came right up when John wanted to get a vocalist. And it was a great decision.

They say the cuts on the album were done in one take, except for one track where Elvin dropped his drumstick. How much preparation had there been?

We always tried to run over things; they have to balance out everything before they start the actual recording. John took solos, and I had solos, as well, and he would give out instructions about how he wanted things to be formed in terms of solos and whatever. John strategized.

Was it your idea to put together a tribute to the album, 48 years later?

It might have been Adam Hertz’s idea, from Blue Note management, but I really liked the concept. [Saxophonist] Chris Potter will be coming, and José James, he’ll be the vocalist; he’s a good young guy, his style is like Hartman’s. [The rhythm section will be Gerald Cannon on bass and Joe Farnsworth on drums.]

How will you prepare for your tribute to the album out here? Are you gonna do all six of the tracks that were on the LP?

I’m not absolutely sure, but I think we’re gonna duplicate the LP. I’ll have the guys listen to the recording, and try to stick close to that, so that if people have the [original] recording, they can relate to it. We’ll do some soloing, but a minimal amount. And we might throw in some of my original stuff [that is, his compositions]. Big Mac has to have some moves! [Laughs]

You did a beautiful new take on Trane’s Naima, on your Solo album [recorded at the Herbst Theatre during SFJAZZ’s spring 2007 season, for Half Note Records].

Well, thank you very much, I’m glad somebody liked it. [Chuckles] It felt great, because I knew her [Coltrane’s first wife, Naima], as well. It came out pretty well.

Are you still writing your own stuff?

I try to, and that’s why, when I have a recording project, I like to interject my stuff. It’s good for commercial reasons too, because it’s good for my publishing company.

And it’s the real McCoy.

Well, I’ve grown a lot. But even with the Johnny Hartman album —it was a beautiful album — I think I sounded like myself. And I hopefully have contributed something to jazz piano, historically. At least, that’s what they tell me I’ve done.