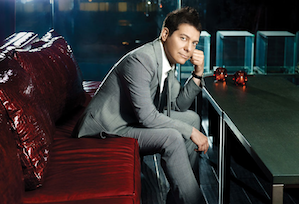 When I first interviewed singer and pianist Michael Feinstein in 1991, he was 35 years old and about a decade into a career as a popular young proponent of the so-called American songbook, significantly inspired by the years he’d spent working for Ira Gershwin, George’s lyric-writing brother, from 1977 to 1983. In the years since our first talks, Feinstein has recorded familiar and unfamiliar gems by the Gershwins and by a batch of other classic songsmiths, in the process selling millions of discs and picking up a handful of Grammy nominations, as well as Emmy nods for his TV specials. He’s hosted his own radio series and TV shows, and has written or cowritten his own songs as well as a couple of books. He also opened an eponymous nightclub at the Loews Regency Hotel in midtown Manhattan in 1999, and another at San Francisco’s Nikko Hotel a couple of months ago.

In his venues and recordings, he’s shared his passion for Broadway, film, and popular music with such veteran collaborators as Andre Previn, George Shearing, Barbara Cook, and Jimmy Webb, and with younger artists including jazz pianist Cyrus Chestnut and Glee and 30 Rock star Cheyenne Jackson. My latest interchange with the busy Feinstein, in anticipation of his July 12 booking at Davies Symphony Hall, happened a couple of hours after the Supreme Court ruling that overturned the Defense of Marriage Act, which gave Feinstein a new reason to celebrate his own 2008 marriage to Terrence Flannery.

Michael, I learned only recently that it was retired Manhattan Family Court Judge Judith Scheindlin, better known as Judge Judy, who urged you and Terrence to tie the knot back then.

She felt it was a significant thing for us to do, to make a statement. And if you know about her philosophy — she’s a great supporter of marriage, because on her TV show she always talks about how when two people just live together, the courts don’t have protocol for dividing up property and all those things. I told her we hadn’t gotten married because it wouldn’t have the federal protections, it would be considered a second-class marriage. But she said she felt that by the act of our getting married, it would start to push things towards change, and put pressure on the federal level. And of course she was right, because that’s what happened [with DOMA]!

When you spoke with Terrence about what happened, what was his reaction? How will it affect you?

Jubilance! And there are 1,200 federal protections that are given to legally married couples and that the state referenda could not cover, so we’ll be affected very deeply.

What about how you feel as a couple?

Well, it won’t change the way we’ve referred to each other, which has been as spouses. But now it’s not second-class status, and there’s no longer any division between one kind of marriage and another. That’s extraordinarily significant.

You told me years ago how important it was to you to feel the lyrics you’re singing, and you credited the influence of Ira Gershwin. As an older married man now, are you the wiser about any of those lyrics?

I believe in lyrics, because they’re telling a story and singing about a specific point of view. Any song that I sing, I create a scenario, an inner picture, of what that story is, and often I sing with an idealized couple in mind, or people I know — whatever will put me deeply in the picture. It might not be the exact thing I’m living, but it’s my job to bring that story to life. In metaphysics, or Science of Mind or New Age philosophy, there’s a phrase, “The word is the law.” In other words, words are powerful and can create reality, and the repetition of words creates change in our lives.

You also said Ira’s spirit was with you when you did your first “show” per se, at the Plush Room in the York Hotel here in San Francisco in 1985.

Ira taught me the fundamentals about interpreting songs, how it was much more than just reciting words on a piece of paper. By his introducing me to many different interpretations of his songs, performed by all kinds of singers, I learned how to connect with the lyric, what had separated me from it. He’d written these songs so long ago and they’d grown — they’d become classic to the public, and in that process, he discovered things in his own songs that made them deeper for him.

Words are powerful and can create reality, and the repetition of words creates change in our lives.

Did the Plush Room itself have anything to do with your wanting and eventually realizing your own nightspots, in New York, here, and maybe someday elsewhere?

Absolutely. The Plush Room was Ground Zero of my nightclub experience. I’d played helter-skelter in a few clubs, but the Plush Room [which closed in 2008] was the first significant one, and was a room I fell in love with. The lights and sound were great. But most of all it was the audiences, the connections I felt with people, on a level I had not experienced playing in piano bars. Suddenly I had a group of people who cared as much about the songs I was singing as I did. It was like finding your long-lost tribe. So I’ve always felt a particular gratitude about San Francisco. And I remember a psychic, Kenny Kingston, he’s quite venerable and he’s advised a lot of celebrities through the years, including Mae West. One day Kenny said to me, “San Francisco is your home. That is your place.” And what he meant was, that’s the place where I have the best connection with audiences, where it’s the most confluent. I don’t know whether it’s a self-fulfilling prophecy, but I’ve always felt that way.

So it must have felt good this year to put a Feinstein’s in the Nikko out here. Your club replaced the Rrazz Room, which had been run by the Plush Room folks.

Oh, it was incredibly exciting, especially to be connected with Anna Marie [Presutti] and the Nikko staff. I don’t think I’ve ever seen a group of people work as hard as they do to make it a world-class experience. I just love the way the room has turned out; I’m very proud of it.

And is there something special about San Franciscans’ embrace of the American songbook?

Suddenly I had a group of people who cared as much about the songs I was singing as I did. It was like finding your long-lost tribe. So I’ve always felt a particular gratitude about San Francisco.

It’s a city that for me is unusual, because it’s a combination of so many different elements. It has a big city’s sophistication, but it’s also an intimate place, and there’s always been acceptance of diversity, that goes back to the 1800s and the Gold Rush. It creates a richer appreciation of art and artists, an awareness of what it takes to make your art.

For this gig in the “Summer & the Symphony” series, have you had any dialogue with Michael Tilson Thomas about what you’ll be doing and how you’ll do it?

When I met him — I was working for Ira Gershwin at the time — I created the opportunity for him to meet and become friends with Ira. Later, I was present when Michael made his [Gershwin] recordings with the L.A. Phil. And I gave him music for things that were unpublished at the time, which he subsequently recorded. So we have a long history together with the Gershwins. And the first time I played at Davies Hall, in 1987 (right after I worked at the Plush Room), it was a Gershwin concert. This will be a big-band Gershwin show [on July 12], more of a swing Gershwin approach, and I’ve got some classic arrangements — one is from the movie Funny Face, danced by Fred Astaire, and it’s never been heard publicly since — and also some new arrangements, by Doug Walter and John Oddo, who have been incredible to realize those wacky ideas I have. It’ll be a unique show, one that I haven’t presented before, which I hope will not only please Gershwin aficionados but also have the power and excitement of the big-band experience, a great combination of sentimentality and energy.

You’ve been well-known and appreciated within cabaret settings, including your own showrooms, so what happens when you expand to something like Davies?

I do a meditation, where I am mindful of the entire audience, and I visualize reaching out and connecting with them, especially in a very large space.

What's your feeling about San Francisco's Gay Pride Parade and your having been part of the cotillion?

A tremendous celebration and a lot of fun, and the timing couldn't have been better. It was a great time for me to have that role.