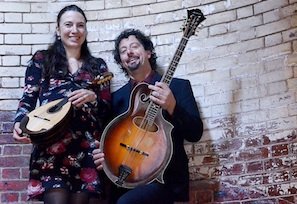 Up in the wooded hills above Oakland, and mostly unknown to their separate legions of fans, Mike Marshall and Catarina Lichtenberg have been jointly engaged in two creative activities: raising 10-month-old daughter Josephine, and preparing for their appearances on a program circumnavigating the Bay with the New Century Chamber Orchestra. Lichtenberg, Bulgarian-born and German-trained toward a celebrated career in duo, chamber, and orchestral settings, will perform Vivaldi’s Concerto for Mandolin in C, and Marshall, whose eclectic hook-ups have included bluegrass and jazz, will present the Bay Area premiere of his own Concerto for Mandolin and Strings. (The four-performance program will also include Gordon Getty’s Four Traditional Pieces, Evan Price’s Emergence, and John Adams’ Shaker Loops.) While trading child-cuddle duties in their happy family home, the couple shared with SFCV perspectives on their other love: the mandolin.

How did the New Century gig come about? Did they come to you, or you to them?

Mike Marshall: They came to me, actually, and wanted to do something. And I said, “The thing to do is to have both Catarina and me,” because we represent the wide span of the history of the instrument. They even mentioned the Vivaldi, and I said, “Catarina is the person to play that, of anyone in the world, and she can play it on the original instrument.”

MM: Take a photo of this, if you really want to see them in action. [He leads this reporter, and a visiting would-be mandolin student named Carol Siegal, to the bedroom, where his and Catarina’s mandolins are nestled cozily against each other on the bed.] Catarina plays what she’d refer to as the “real” mandolin. [She chuckles.] It has a bowback and a flat face.

MM: But I’d had a prejudice against it, being that, in America, we played this Gibson-style instrument. Orville Gibson was a supercreative fella: He started making this carved-top instrument, more like a guitar, and the back and face are carved like a violin. Then about 1920, Gibson hired a fella named Lloyd Loar who completely redesigned the instrument and gave it f-holes, like a violin, and changed the tone bars inside. Which is what the bluegrass people play, so that’s what I play. And it’s really suited to playing rhythm chords really hard.

MM: Which of course came from the oud, right? In fact, Catarina has an even earlier instrument than this, which is hanging over there, and that’s what she’s gonna play in this concert.

CL: That’s a Baroque instrument, and “soprano lute” is also a good description of it. This is a copy from the 18th century; Plesber is the maker.

MM: Even the tuning is different. This is more like fourths [intervals], like a guitar, while the standard mandolin is fifths.

So the mandolin evolved through time.

CL: Handel used it, Vivaldi used it, but at that same time the Neapolitan mandolin started becoming popular. Stradivarius was also building mandolins (though we have only a picture), so it shows the mandolin was very appreciated at that time. The highest appreciation was around 1760. In France, there were written 12 methods for mandolin. The opera was very popular in France, and the mandolin players kind of jumped on this boat by teaching to accompany yourself with nice arpeggio techniques. They took the famous opera songs.

MM: And you had great luthiers building beautiful instruments with ornate inlay. So people wanted to have these instrumental works of art around their homes. Then it died out in popularity …

CL: … because of the French Revolution, in 1789, and what that did to the noble people who were playing them …

MM: … and the teachers ran back to Italy.

CL: Later, for a long time, there were no compositions, and then compositions came out at the end of the 19th century again, in Italy. But the mandolin was being played differently, with this romantic tremolo.

We were fans of each other, long before meeting.

MM: Which in the Baroque era had been considered gauche, a folk technique that only people on the street would do. What’s interesting about the 20th century is, you have the Italians emigrating to the New World, so you have this explosion of mandolin orchestras. At the same time, it filters into the rural people, and becomes the instrument of choice for folk music and bluegrass. But you also have Italians going down to Brazil, where you get a whole culture of choro music [employing mandolins].

It would have been easy to transport …

MM: … on top of the suitcases.

And it got into concert halls?

CL: In the 20th century, Schoenberg used mandolin in a lot of his compositions, and Mahler and Webern, then Zemlinksy.

MM: It was used as a color instrument in big orchestras. But over the last 300 years, there’s always been, “How can we make it louder?” The earlier mandolins had gut strings and gut frets, and then you had the technological development of metal strings and metal frets, which meant more volume.

You two have kind of unified the history of mandolin under one roof.

MM: We were fans of each other, long before meeting.

CL: When I heard his CDs in the ’90s [including recordings with violinist Darol Anger and with the Modern Mandolin Quartet], and I didn’t know him personally yet, I thought, Very different from what I do, but very cool. So I was always looking forward to meeting some day, and I guess it was the same with Mike.

MM: When I heard Catarina, I said, “Now wait a second, there’s something really cool there, different from Uncle Joe playing the old Italian style.” Now, I’m hanging out in the woods with a serious scholar of the history of our instrument. Here I’ve played it for 35 years, and thought I knew something about where it came from.

And you managed to join up in recording some classical material.

CL: Our first CD was a mix, and the second will be very classical, with Bach’s Two-Part Inventions, which we’ll record this weekend. I’m playing the right hand, and Mike the left hand.

MM: I’ll actually be playing the lower voice on a mandocello.

CL: The music was written for the harpsichord, which is plucked and almost sounds like a Baroque mandolin. I think Bach would have appreciated it — too bad he’s dead, right? [They both laugh.]

When will we be getting all this?

CL: With a baby, you cannot record for 12 hours a day for four or five days. But I hope it will be this year, for sure.

And isn’t writing a concerto another kind of classical adventure for you, Mike?

MM: I’ve had my feet in those waters, if you look back on the stuff I did with Edgar Meyer, the CD with Joshua Bell and Edgar and [mandolinist] Sam Bush, and the CD with Bela Fleck for Sony Classical. I haven’t studied formally, in a conservatory. But I would have to say that riding on long van rides with Joshua Bell and looking at scores with Edgar Meyer and having Yehudi Menuhin show up backstage has been where I’ve learned what I’ve learned.

MM: We haven’t rehearsed yet, but I have no doubt that they’ll be open and able to play their asses off. And it’s not like I’m asking them to be a bluegrass band. I’m not gonna be asking them to do what Darol Anger does, when he’s playing a groove chop behind me while I’m soloing.

Tell us more about your concerto.

MM: I’ve been learning from Catarina every day about how to phrase that music. And the biggest thing I’m starting to understand is, there’s a longer idea of a melodic line. In my first, slow movement, there’s definitely heavily influenced Bach stuff, very counterpoint and tonal, so [the New Century] will be very much at home with some of those moments. The first half of the second movement is almost like a pop tune, and the second half is drawing from the Italian Romantic stuff, so they’ll also be very comfortable with that. The third movement is where the bluegrass stuff shows up, and that’ll be the biggest challenge to them, in terms of understanding how to phrase it. They’re conductorless, so they’re used to the idea of following a soloist. And they’re all great players, and I’m sure many of them have had experiences with other kinds of music. We’re dealing with a different time now, when the average classical musician has heard Irish music, maybe even learned a few tunes, and has maybe played with jazz musicians in some collective gathering.

Is the New Century expecting you to bring them some fun?

MM: I hope so. I sent [New Century Music Director] Nadja [Salerno-Sonnenberg] a recording of the concerto [by an Indianapolis youth orchestra], and she loved it! I think I’m representing the possibility that worlds can come together in a healthy way, and I think she’s open to that.