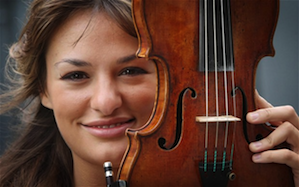 The America’s Cup Pavillion, opened in June of this year between piers 27 and 29 on San Francisco’s Embarcadero, is an immense outdoor stadium with awesome (in the original sense) views of both the city and the bay. But it’s a temporary venue, erected to coincide with a much-heralded albeit elite sporting event associated with tycoons and high-tech sailing vessels far beyond the reach of ordinary mortals. Although she herself is the daughter of a Scottish multi-millionaire, Nicola Benedetti’s devotion to getting the sound of her Gariel Stradivarius and her classically-based repertoire out to the masses, including the 9,000-plus spectators at the Pavillion next Saturday, is anything but temporary.

Benedetti will be celebrating her 26th birthday here on the day of the concert “Tchaikovsky’s Greatest Hits” with the San Francisco Symphony on July 20. She started violin lessons at five and by age ten was enrolled at Yehudi Menuhin’s School in Surrey, England, appearing two years later at Lord Menuhin’s memorial service at Westminster Abbey. In the following decade, she studied with Maciej Rakowski of the English Chamber Orchestra, won the BBC’s Young Musician of the Year competition, and began a chart-topping recording career.

More recently, she’s expanded into Baroque and new music repertoires and has appeared at rock festivals and tennis ceremonies, and has become a spokesperson for El Sistema, the Venezuela-born global movement bringing music education to disadvantaged youth. On her latest recording, The Silver Violin (Decca Classics), the UK’s highest-charting classical instrumental album of the last two decades, Benedetti applies her romantic, cantabile intonation and phrasing to the music of film composers. In a charming Scottish accent, she chatted briefly with SFCV from a tour stop in Sao Paulo, Brazil.

I understand that your outreach activity delayed our interview time a bit.

We have master classes, as well as rehearsals and a concert, and the timing was proving very difficult. But when I tour, I pretty much teach whatever the local people think is useful.

Can you tell us about El Sistema and your connection to it?

El Sistema is home now to nearly half a million young people [worldwide] playing classical music. They are given hours of tuition every day, and over the weekend, and all of that for free — individual lessons and group lessons, but primarily orchestral activity. All of the children are brought together, so there’s a breaking of any kind of class and social boundaries. They’ve been doing it for nearly forty years, and it’s replacing time that a lot of these kids would have spent after school being inspired by all the wrong things. In a place like Caracas, it was a curious environmental change, from drugs and gang warfare to something extremely disciplined and very protective and inclusive. I discovered a man named Rich Holloway who’d set up something inspired by El Sistema in Scotland, and I got in touch with him.

Have those wrong things been a problem in Scotland as well? About the only thing most of us know about that is from Trainspotting [the 1996 film about the drug scene in Edinburgh].

Trainspotting was accurate for a certain level of society, increasingly so with our communities that are largely unemployed and suffering from difficulties with general achievement and ambition. One of the biggest challenges we face is to quantify what true values are, and that’s brought to the surface with a program like Sistema.

You’ve spoken about dissolving class boundaries, but you come from a pretty privileged background.

Well, I have a very distinct story. My parents both grew up with very little, in Italy. My mother moved to Scotland when she was three, my dad when he was ten. And they knew hardships in Scotland, both of them. My father left school when he was 15 and started working, and he’s a true entrepreneurial spirit, so he was very successful in business. So I grew up very comfortable financially, but my privilege has been an education of values, being taught that I will not achieve anything from what I was handed by my parents, but only through being determined and consistent and working hard. Traveling with my music, I’ve many times been surrounded by children that in terms of wealth had much less than me, but were given ten times more: Their parents would just spoil them with endless toys and gadgets and all sorts of things I wasn’t allowed.

So you’ve advocated focus, in particular on a single instrument.

And I’d love to see every child have a creative and spiritual education, not just words and numbers that are approached in a cold matter.

One of the biggest challenges we face is to quantify what true values are.

Is there a connection between your championing pedagogy, musical in particular, and your mission to get classical music beyond the concert hall and to break down boundaries between genres?

I’m a type that’s constantly trying to redefine my view of the world, and traveling as I do, I try to see all sides of wherever I visit, meeting people and asking questions and not being blinkered in my lovely life of hotels and concert halls. My feeling about musical boundaries is quite simple, really: There are likes and dislikes, and you can’t rely on tradition to tell you what your taste is. If there’s something great, make it as available as possible, for as many people as possible.

Does that include doing Tchaikovsky in a humongous waterfront venue?

I’m grateful for the opportunity, though I’m not sure how much my beliefs or desires had to do with it. To play for that many people with a wonderful orchestra, I’m sure it will be great. But for large crowds, it’s always important to get the visuals and the sound right; they have to be enhanced.

I’m a type that’s constantly trying to redefine my view of the world.

The San Jose Mercury News critic who saw Sting at the Pavilion reported that the acoustics are great, wherever you sit. I gather from your publicity shots that it’s important to you to present yourself well, visually.

People think I take a lot more care than I actually do. I’m actually at the point now where my mom is telling me I should buy a new dress a little more often.