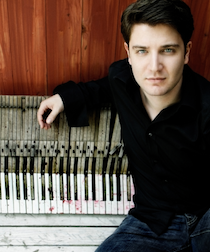 The young Italian pianist Alessio Bax has gained serious career momentum since taking first prizes at the Leeds International Pianoforte Competition and Japan’s Hamamatsu International Piano Competition. To cap it off, he was awarded a prestigious Avery Fisher Career Grant in 2009 and hasn’t looked back, concertizing around the globe and earning more miles as a frequent flier than most of us will in a lifetime — a fact documented in his thoughtful blog “Have Piano, Will Travel.” Bax and his beautiful wife, pianist Lucille Chung, often perform together, and will do so at [email protected] in late July. Bax took time to speak to SFCV from his New York home on Independence Day, his only day home for another few months.

Your solo performance at [email protected] will be a carte blanche concert, where you are invited to choose your own program. What will you offer this year?

The festival is about the music of Brahms, so I’ll focus on some of my favorite solo works of his and reach out and explore the specific kind of influence he had on young composers. What interests me are the historical connotations of what happens after Brahms, in this case Bartók and Enescu. They are not two composers that typically come to mind when you think of Brahms, but they both studied and performed Brahms as young people. After World War I, the Austro-Hungarian empire was broken down into different countries and people became much more attached to their ethnic roots, not just whomever they belonged to politically. Composers like Bartók and Enescu were raised on Brahms and Beethoven, but used it in a completely different way that honored their own traditions.

You will play harpsichord, as well. How did that come about?

I don’t have much of a background in it, but I’m looking forward to it! Last year I played a pretty wild piece of George Antheil’s, Sonata No. 2 for Violin and Piano, in which the piano was treated like a percussive instrument. The piano has a huge cadenza that’s basically just clusters on the keyboard, and then the pianist is asked to switch to drums. So I had my debut on percussion last year at the Menlo Festival, and this year it will be on harpsichord [laughs]. On the piano, we have incredible, almost unlimited ways to shape sound. On the harpsichord, you have to find a different way of expression. It’s important for pianists to know what the music we play on piano was written for.

Your most recent CD is Rachmaninov’s Preludes & Melodies. Would you say you have specialized in Romantic repertoire?

No, it happens that my two recordings are of the music of Bach. Well, the second was called Baroque Reflections, meaning the music was inspired by Baroque composers. The beautiful thing about being a pianist is the great variety of repertoire we have. This morning I was looking at some Ligeti, for example.

What about working so closely with your spouse — does that get challenging?

No, in our case it’s a great fortune that we are able to do that. This year we’ve had about 40 concerts together, mostly because of the long trans-Canadian tour. Playing four-hand or two-piano music is a bit different than regular chamber music. You have to understand each other at a much deeper level. By now, we know each other’s playing so well and what we like that it is so much easier and we bypass a lot of rehearsal. We really know what we want to do, and it’s a pleasure.

Do you seek out such long, adventurous tours because of your love for travel?

Yes. I had been on a solo tour across Siberia, and I learned so much about people and music. Playing the same program day after day, under some of the harshest conditions I personally had ever encountered, I discovered so many new things about music that I’d already been playing a long time in my life. It was also an amazing human experience. I was thinking about something like that when we embarked on our Canadian tour. To be able to do that with someone else, not to mention your own spouse, was really special.

On the piano, we have incredible, almost unlimited ways to shape sound.... The beautiful thing about being a pianist is the great variety of repertoire we have.

What do you think the challenges are that face young pianists these days?

I think every performer has a different set of challenges. If there’s one thing common to everyone, it’s that there are a lot of wonderful people out there, so a lot of competition. But you can’t really see it that way. We’re so blessed to do what we love to do. Each day we’re in contact with such incredible music, such incredible art; that’s something that’s never changed, in my mind, since I was a little boy. And I’ve been fortunate that I didn’t have to change my mind and think I should do something different. It’s important to be honest with yourself and love what you’re doing.

You’ve got some great shots on your blog. How did you get into photography?

Even as a kid, I was playing with cameras, taking dozens of pictures, and now digital is easier. I consider myself a very enthusiastic amateur. I have the opportunity to be in so many wonderful places. From that point of view, I had an incredible month — going from Italy to the Bavarian Alps, to the west fiords of Iceland, to Cyprus, and then back to Long Island! To leave those places as just recollections is just a pity. When you’re confronted with such wonderful nature, photos are the perfect way to store such memories.

Do you enjoy blogging, and is that something that artists must do these days?

I do it for the same reason as taking pictures. I have so many thoughts while traveling. As musicians, we are very busy, but there is downtime in airports and hotels, and there’s not so much we can do then. I think my first blog posting was being jet-lagged and unable to sleep, with so many thoughts in my head, just beginning to write them down.

What’s your next dream project?

Menlo is a highlight for me. What [Artistic Directors] David [Finckel] and Wu Han have created, and the way the community participates, is really special. The quality of the music, the programming, and every little aspect makes Menlo a perfect festival.

This fall, there will be lots of travel. I will play on the opening concert for the Chamber Music Society of Lincoln Center at Tully Hall, and also in Beijing, Rome, then Taipei and Tokyo and back directly to Dallas to perform with the Dallas Symphony. We have another Canadian tour in 2012, but in the Maritime Provinces, which I expect will be a bit more luxurious and beautiful. On our other tour, we went in winter to the prairies of Saskatchewan and Manitoba, which was just what we wanted to do, but pretty rough.

Are you going to celebrate the American Independence day?

I’m both Italian and American, so yes: Happy 4th!