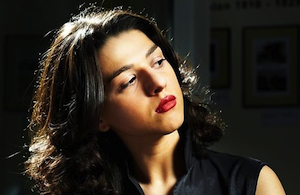 Twenty-five-year old pianist Khatia Buniatishvili makes good use of the five languages she speaks fluently. She learned Georgian, while growing up in the former Soviet republic, and the Russian of the dominant culture. At a competition in her hometown of Tbilisi, soon after meeting her pianistic idol Martha Argerich (to whom she’s been compared), the then-teenaged Buniatishvili was persuaded by Russian expatriate pianist Oleg Maisenberg to follow his path to Vienna, where she went to study music and German. She now lives in Paris and speaks French, but tours internationally and made her recording debut for Sony with a lovely recital of Liszt. By chance echoing the repertoire choice of label-mate Lang Lang, Buniatishvili (whose surname is accented on the “tish”) followed last year’s Liszt with a release this year of Chopin, backed by the Orchestre de Paris under Estonian conductor Paavo Järvi. Later this month, she’ll present Rachmaninov’s Piano Concerto No. 2 at Davies Symphony Hall, with Russian-born Vladimir Jurowski conducting the San Francisco Symphony. In a chat with SFCV from her Parisian abode, she exhibited the sort of sensuous energy evident in her performances, in near-perfect English.

Some French critic credited you with “imagination hors du common,” uncommon imagination. What do you suppose he meant?

I suppose we could ask him! [Laughs] But for me, imagination is my life, my life is imagination, so probably he was somehow right. When I was a child, my mother tried to use us [Khatia and her sister Gvantsa] to be always busy, practicing, reading. It was a good thing, because as a child you can learn lots of things much faster, and more naturally. You might think, Such a boring life. But for me it was not boring, because I had my imagination, I had stories in my head. That was my life: what happened in my mind, and not what happened outside.

What was the age difference between you girls?

One year. We were like twins, being very friendly with each other, and it was not just a facade. And it’s still the same right now.

What’s Gvantsa up to?

She’s a pianist, playing with me sometimes. She’s also playing chamber music and is occupied by doing some organization stuff related to music.

When you were kids, outside Tbilisi’s State Conservatory, did you get to hear Georgian folk music?

Yah, you don’t need to be a musician there to listen to folk music, because Georgians are proud of their folk music, it’s something quite unique. That kind of polyphony, you cannot find elsewhere; it comes from many centuries ago. [It’s said to be the source of the earliest Christian polyphonic music.] And in the different regions, we have different music. For me, the most touching things are our songs.

How did you discover Argentinean pianist Martha Argerich?

First time, my mom bought a cassette. I didn’t know who was playing; it was Brahms’ Rhapsody, his second. I was fascinated. I read the name “Argerich” and I thought it was a man. But after I knew it was a woman, I watched her on videos, like the Rachmaninov Third Concerto, and I fell in love with her, she was the idol of a woman pianist. The first time I met her, at the Verbier Festival (I was 15), I was scared to meet her in reality, because when someone’s your idol, you’re scared about being disappointed. But I was not disappointed, because she’s real! What I saw on stage, while she was playing, it was the same person as in life. Special artists are always real. They have good and bad sides (each person has), but you can’t be disappointed because they’re natural, so you can hear the personality in their playing.

Martha Argerich was my first fascination on stage. It’s the natural singing of your inside voice.

What impressed you about her pianism? Have you adopted her approach?

There are many young musicians who play very fast, very clean, and they can do everything. One can reach everything, if one practices a lot. But what I loved in her playing was this natural virtuosity, which came from her whole body, and from her spirit. Her phrasing, in a very fast passage, came from her stomach, and that was something very unusual for me. I saw this in [Sviatoslav] Richter’s playing, but that was just recordings, I had never listened to it live, so Martha was my first fascination on stage. It’s the natural singing of your inside voice. You asked me if I’ve found something similar? Myself, no, because when I listen to her, it has nothing to do with me, I’m fascinated as a listener, not as a musician. But — quite often it was said, when I was 15 or 16, that “you remind me of a young Martha,” and I would lie if I said I was not happy for hearing this. Of course I was, and I was proud. But I cannot compare myself to her, because I think she’s completely apart from this world. She’s not a “normal” musician. And anyway I like people who are different from me.

In recordings, and in a significant part of your performance repertoire, you seem to have favored Central and Eastern Europe.

I like, in general, a mixture of things. And myself, I’m from a country, Georgia, which is also a mixture, of Asian and European culture. Rachmaninov has oriental roots; his music is not only Russian, and I feel with him sometimes even some sort of Georgian element.

First of all, his harmonies are not that Russian for me. They’re much sunnier, not like the cold side of Russia, but more southern. And the rhythm, in both Rachmaninov concertos (the Second and Third, my favorites, I play both of them), in the final movements of both, it’s always [she vocalizes a series of quick triplets]. It’s like Caucasian hand-percussion instruments, and he uses it at the beginning of the last movement in both concertos.

I don’t want to plan. I just want to have more of those moments when I want to do something, when I love what I’m doing.

Have Georgian composers tried to translate their folk music to the concert hall?

Most Georgian composers are famous in Georgia, but not so much internationally. But they do try to use folk music. But the folk music is so strong that somehow it can swallow the individuality of a person, if the person is not a genius who can find his own voice, which I think is very important. Do you know [Giya] Kancheli?

I think he’s in the Kronos Quartet repertoire.

Is he part of your repertoire?

Two or three years ago, I played his Valse Boston with Gidon Kremer and Kremerata Baltica, and I’ve played his piano pieces. I like his music very much, and I see myself in the future playing his music quite often.

Has the music of Georgia also influenced the way you approach other music?

Is Paris a good place to have moved to?

I think now it’s the right city to be in. I was dreaming, in my imagination, to spend some years in Paris, not because of the Tour Eiffel and the kitschy side, but because of the beginning of the 20th century, when all the artists were here and it was so creative. I have this kind of nostalgia for a Paris I never knew.

Have you been getting out to different kinds of music?

My mom loved jazz, because her father was completely crazy about jazz, and I wasn’t very interested as a child but now I’m getting more interested in jazz. But also pop French musicians like Barbara, Gainsbourg, and Jacques Brel. And also Sting, and Radiohead. I like very much Queen.

We’ve got plenty of jazz and other sounds waiting here for you in San Francisco.

Really? I didn’t know this!

Where do you want to go with your career?

I don’t know which kind of first-sight love I’ll have with a composer. Will it be contemporary, or Baroque, or from the classical or Romantic period? I can’t say, I don’t want to plan. I just want to have more of those moments when I want to do something, when I love what I’m doing. But I have no idea what I will do tomorrow.