After successfully rebounding from colon cancer in 2010 and an embolism in July of this year, 72-year-old Plácido Domingo has proven that you can't keep a good tenor down. With his latest recording in a Grammy-laden career — Verdi, released by Sony last week — and in his live operatic and concert performances in a variety of roles, Domingo has also shown that you can't keep a tenor superstar from maturing into an alluring baritone. He'll be heard in both voices at Berkeley's Greek Theatre in his Cal Performances appearance this coming Saturday, where the program will include selections from the Spanish lyric-dramatic genre known as zarzuela, some Broadway offerings, and operatic arias and ensemble singing with a pair of sopranos from his Young Artists Program. 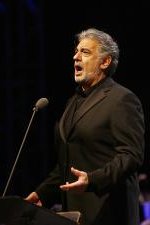 Born in Spain and raised there and in Mexico, Domingo had early experience in all these genres, as well as training as a pianist and conductor. His US debut with Joan Sutherland in 1961 led to an engagement with the Metropolitan Opera later in that decade, and he went on to open the Met's seasons twenty-one times, four more than Enrico Caruso. Singing in over 140 roles in companies around the world (including San Francisco, where he debuted in 1969), Domingo performed among "The Three Tenors," with José Carreras and Luciano Pavarotti, in several filmed and televised productions, as well as at numerous championship soccer matches and Olympic ceremonies. He continues as general director of the Los Angeles Opera, and has conducted both operatic and symphonic ensembles. SFCV enjoyed a hastily arranged chat with Domingo, whose English accent and usage are gently colored by his native Spanish, from his vacation home in Acapulco.

I'm wondering, with the many hats you wear these days as conductor, administrator, and artist: should I refer to you as Maestro, or is there a more appropriate way to address you?

What about "Plácido?" [He chuckles.]

You're visiting us in September, at the Greek Theatre, and then returning in January, to help the Symphony celebrate the 80th birthday of Gordon Getty.

Yah, the Bay Area, I love it, you know, so it will be wonderful for me.

Thank you very much. It has been always beautiful companies, beautiful theaters for me. So many years, ever since the days of Mr. [Kurt Herbert] Adler, the public of San Francisco has always been wonderful and really loving opera. I have so many wonderful memories of things, I always go back with great great great happiness.

The last time you sang with the Opera here, it was as a tenor.

That was in 2010, in [Alfano's] Cyrano de Bergerac. But that was also the first year I started doing both things. I did my first Boccanegras in April of that year. And in October, I think, I came to do Cyrano.

You became a switch-hitter.

And in the concerts, I still do some things of tenor, and most things of baritone, you know. But little by little, I'm dedicating myself more to the baritone parts.

You'll do both at the Greek?

Well, yeah. When I do this kind of concert, I like to do a different kind of program. I start with opera, then I do some zarzuela and operetta, and also Broadway and songs. So we have a combination. And I like to go through both tessituras.

What was it that led you to first extend into the baritone tessitura?

I always was hoping that, at the end of my career, I could do Simon Boccanegra, because it's a part that I adore. . . And that was my plan. But then, Maestro Barenboim convinced me to do the Simon before I was planning to. And I started doing it, and realized my career was still not over. So I was combining with other operas, of tenor, and starting Rigoletto also, on live television in Mantua. And then I continued doing the I Due Foscari, and the Traviata, Nabucco, and just last month I did Giovanna d'Arco in Salzburg, and Il Trovatore I'll be doing in November in Berlin, with Barenboim. So I have been doing more parts. I did also the Thaïs of Massenet.

So part of the payoff for you is that the switch has allowed you to inhabit new characters.

Yah! You know that I have always loved the combination of the singing with finding great characters. The Verdi repertoire has some of the best characters, and Verdi wrote some of his best music for the baritone, the scenes involving father and daughter, or father and son, which was very important in his life. He lost his children and his wife [to illness] when he was quite young, you know. And so the deep feeling that he has in this kind of music is phenomenal, in Boccanegra, in Rigoletto, in Giovanna d'Arco, in Traviata. Always, singing with the children, or referring to the children, becomes the best kind of music.

And now you, yourself, are a grandfather.

Your son, Alvaro, has been helping manage your career, and did a gracious job of connecting us.

He does a great job for me. And at the moment, while I am on my way to the the concert there [in Berkeley], it coincides with my period of vacation, so I have a bit of a break with my son [Pépé] and the grandchildren [six of them] right here in Acapulco.

Has age changed your voice?

Obviously, after so many years singing the tenor repertoire, it wouldn't be easy for me to sing the very difficult [tenor] roles I did before. The voice, fortunately, is healthy. But little by little, the voice is getting more color, darker, so that I think that one day I will sound like a real baritone. I think now I am in that process, and I am putting all my heart into the repertoire I'm singing.

And you've given us a CD of Verdi, showcasing his creations for baritone. Did the recording work out as you'd hoped?

Yah, yah, I really love it, and I hope that the public will like it. I recorded the most popular arias, and others that are not so popular, but some of the most beautiful arias of Verdi.

Have you had feedback about your explorations? Any resistance, or have you been embraced and applauded?

Well, I think it is both ways. Most of the people really like it, and there are people that, it doesn't matter what you do, they won't like it. [Chuckles] I read the other day in the paper, where somebody said, "I was never a Domingo fan, as a tenor, and much less as a baritone."[Chuckles again] You read things like this, but fortunately it is a minority of people. Those things make me laugh. The critics tell me, and I read it with attention, they say, "Okay, about Mr. Domingo, in a way, it's not the real sound of the baritone, but his singing, his phrasing, are believable."They give me many compliments. And with time passing they say, "We hear more color in his voice, so maybe he's going in the right direction."So I'm very happy and very satisfied with the results.

Even the skeptics will catch up with you eventually.

We've talked about going baritone in grand opera, but is it also an advantage to you in other forms, like zarzuela?

Your concert at the Greek will be kind of a delightful variety show.

I always have a couple of partners. On this occasion I have two sopranos who have been starting their careers in my Young Artists Program: Angel Blue from the program in Los Angeles, and Micaëla Oeste from the program in Washington. We do some Broadway, besides the opera and zarzuela. I think the concert is so much better when you have something else. I'm not saying if you're good or if you're bad, but if you're only doing the program alone, it could be monotonous. I don't think the public leaves in disappointment from a concert where I'm singing, if I am feeling fine, because the variation of the repertoire they like very much. Even in a big venue, they feel just like you're in their living room.

You'll be singing "Some Enchanted Evening," from South Pacific. Is that new to your repertoire? Are you closer now to the sound of Ezio Pinza, who originated that role and song on Broadway?

Actually I do it in many of my concerts. Some of those Broadway songs have been made to fit in any tessitura. Ezio Pinza was a bass; I sing it higher. I used to sing it even higher, as a tenor. Since it's a love song, it doesn't have to be a bass, baritone, or a tenor.

You're a very active man, in a variety of functions, so how do you feel when people refer to you as the last of a generation of singers?

I think it has an important meaning; I'm very touched that they see me in that group of singers. But I have been already in different generations of singers, so I don't know. [Chuckles] Many singers who started after me have already finished their careers. And I always say, when I started singing as a tenor, I sang with sopranos who could have been my grandmother, say, Lily Pons and Magda Olivero. Then I was singing with sopranos who were the age of my mother, like Renata Tebaldi or Birgit Nilsson. Then I started to sing with my "older sisters," then with my "sisters," then with my "younger sisters," then I continue with my "daughters." And now I am singing with singers who could be my granddaughters. That has been a whole career! I am amazed and surprised that I am still singing, and I hope to continue for a little bit. [Chuckles]

I hope so too. It sounds like it's your partners who keep you ageless.

Just how thrilled I am to be there. And I want to wish the [San Francisco Opera] company a great season, they are opening the night before my concert. I hope they will have a brilliant season. David Gockley and myself know each other for so long, I know he has been doing wonderful wonderful wonderful seasons. The Opera came back where it belongs. It is difficult for me, because I used to go a lot to San Francisco, but being the director of the opera in Los Angeles, I have been going there instead. I hope I can come back and do some opera in San Francisco. Obviously, I might not be able to a whole production, but sometimes, when they are doing a popular opera, maybe they could have three performances that I could do. I am also looking forward to my appearance at the celebration of Gordon [Getty], because he has been unbelievable in helping so much the arts, and helping us also in Los Angeles. I will be very happy to be at his 80th birthday, where I'm sure there will be many other singers participating.